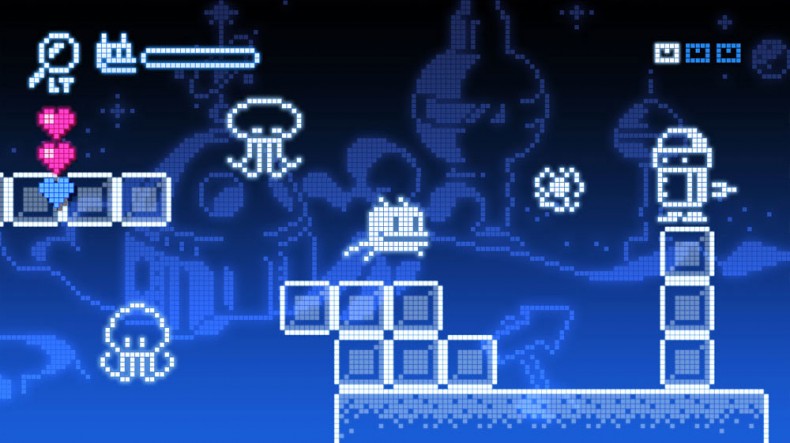 The Xbox Live Indie Games section of the Xbox Live Marketplace is depressing. I’ll actually go a step further: it’s utter junk. Most of the games available on it are poor clones of popular games, games filled with pictures of barely clothed cartoon women or farting games rife with quicktime events. Most people will stick with Xbox Live Arcade when attempting to find an independent game to play because otherwise their efforts will be akin to searching for a dime in a fountain full of pennies and cement. A Fading MelodyÂ is a strange game. It’s a fun and surprisingly difficult platformer, but where it really stands out is in its story.Â The main character is an unnamed woman who is portrayed in the game as a white silhouette with hardly any distinguishable features.Â Text pops up onscreen between levels that clears up the mystery surrounding something awful that happened in the protagonist’s past. It’s a lot like Jonathan Blow’sÂ BraidÂ in that regard, but the narrative inÂ A Fading MelodyÂ is a lot less ambiguous. It’s a story with a beginning and an ending, and it’s a pretty good one.

All the Bad Parts WhileÂ A Fading MelodyÂ is strange,Â All the Bad PartsÂ is just plain bizarre. Its art style is similar to that of theÂ Paper MarioÂ games. It’s a brawler, albeit an extremely simplistic one. Its combat system really is a drag at times, but the story inÂ All the Bad Parts, which deals with all the bad parts of a man’s life, is interesting. It kept me going even when I grew weary of all the button mashing. The game gets weirder and weirder as it progresses, but there’s a reason for that, and finding out that reason is what makes it all worth checking out. TheÂ ArkedoÂ games are all tributes to the past. The first game, JUMP!, is a platformer. The second,Â SWAP!,Â is basicallyÂ Tetris. The third,Â PIXEL!,Â is a side-scroller starring a cat.Â PIXEL!Â is easily the best of the three, but they’re all fun. They’re perfect reminders of why games released more than 20 years ago are still enjoyable now. BleedÂ is a bullet hell game, and for my money it ranks right up there alongside the likes ofÂ IkarugaÂ andÂ Contra.Â The controls take a little getting used to. The left trigger on the Xbox 360 controller slows down time in the game while the the right trigger causes the protagonist, Wryn, to jump. The shooting controls are mapped to the right stick. Anyone who is willing to get used to this unorthodox scheme, which is really quite good, is going to discover an exciting, fun experience.Â BleedÂ originally cost $5, and it was worth that. At $2.99 it’s a steal.

Curse of the Crescent Isle Curse of the Crescent IsleÂ doesn’t really go against the trend of games on Xbox Live being clones of other games, but at least it’s a good clone. It’s a mixture ofÂ Super Mario Bros. 2Â andÂ DuckTales. Thank goodness it leans more towards the latter because I’m not really a fan ofÂ Yume KÅjÅ: Doki Doki PanicÂ aka Mario’s second NES adventure. I may be a blasphemer for saying that, but oh well.Â Crescent IsleÂ relies on the pick-up-enemies-and-throw-them-at-other-enemies gameplay of the secondÂ MarioÂ game, but the protagonist can also use a foe to safely travel across dangerous parts of an environment or solve puzzles. The puzzles inÂ Crescent IsleÂ are pretty decent, as are the boss battles. The controls can be a little finicky at times, but overallÂ Crescent IsleÂ is a good mixture of what made 8-bit games so enjoyable in the first place. DarkÂ is essentiallyÂ Limbo, but is its predecessor and features a far cuter, less creepy protagonist. It’s a physics-based platformer filled with excellent level design. It’s also a game of pure exploration, never once sacrificing its world for a gameplay moment or puzzle. It takes less than 20 minutes to complete, but it’s also $1. It’s nearly impossible to point out its flaws without sounding nitpicky. I’ll go ahead and say this:Â DecayÂ creeped me the hell out. I’m not really a fan of traditional point and click games anymore (I played the hell out ofÂ RivenÂ as a kid, though), butÂ DecayÂ immediately drew me in by allowing me to play as a character who attempts suicide right at the beginning of the game.Â DecayÂ is not a happy game; it starts off with a scene of a man’s eye rolling into the back of his head and just gets more and more freaky until the end of the fourth part. Yes,Â DecayÂ is divided into four parts, which makes it probably the most expensive Xbox Live Indie game, but it’s interesting enough to be worth the investment. All the pointing and clicking may not be for everyone, but there are enough clever puzzles and shocking revelations to keep the ball rolling.Â DecayÂ really is atmospheric and scary, and that’s what matters the most in a horror game. DLC QuestÂ is hilarious. It pokes fun at game developers’ over-reliance on downloadable content. For example, the protagonist can’t even move left at the beginning of the game without purchasing DLC. Then he has to purchase DLC to be able to jump. Fortunately all the DLC inÂ DLC QuestÂ is purchased via in-game currency because otherwise it would cost more than an Xbox One. I loved the time I spent withÂ DLC QuestÂ despite its short length because besides being funny it’s also a solid platformer. Then the zombies show up. Gateways!Â is a game that should be available for purchase on Xbox Live Arcade based on the simple fact that it’s amazing. It’s easily the best Xbox Live Indie game. It borrows fromÂ Portal, but improves upon its gameplay in some astounding ways. I found it very refreshing to play such a visually simplistic game that offers such ingenuity.Â Gateways!Â features some of the best puzzles to ever grace a game. It’s one of those games that proves the “substance over style” argument. It would be a crime to not purchaseÂ Gateways!Â now that it’s $1. Do the right thing. Ask Xbox owners to name the two most well-known Xbox Live Indie Games, and they’ll more than likely pickÂ The Impossible GameÂ andÂ I MAED A GAME W1TH Z0MBIES 1N IT!!!1. The Impossible GameÂ is a festering pus hole that’s been described as “fun” by a bunch of liars.Â I MAED A GAME W1TH Z0MBIES 1N IT!!!1Â is actually fun. It has a catchy and stoopid title and theme song. It’s a stick shooter in the same vein asÂ Geometry Wars: Retro Evolved, though it’s nowhere near as good. It was one of Ska Studios’ earlier games. Ska has since went on to create theÂ DishwasherÂ games andÂ Charlie Murder, so they’ve been releasing solid games for a while now.

There you have it, folks: 10 quality Xbox Live Indie Games. I’m not sure I could find 10 more. It’s a shame that the Indie Games page on Xbox Live is in the shape it’s in, but that’s that. If I can find 10, or even five, more games I like on there, I might make another one of these lists. Until then, I hope whoever’s reading this finds the same amount of enjoyment I found in these 10 games. Even if you don’t, they’re all still pretty cheap. Check them out.

Features Editor Buddy was a journalism major at the University of Alabama. He now spends his days writing novels that will probably never get published and wishing he were an extra in an Anthony Hopkins film. He's been gaming since he can remember and has owned every console from the NES to the TurboGrafx-16 to, yes, even the Phillips CD-i. He loves all games, but his favorite genres are shooters and RPGs. His favorite game is The Legend of Zelda: Ocarina of Time.
You might also like
indieArticlesFeatures