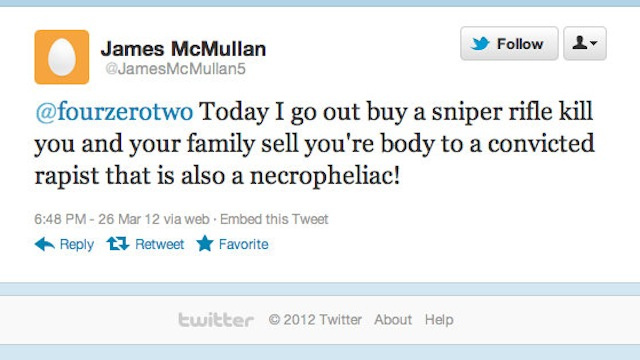 On July 23, David Vonderhaar, the design director for Treyarch, received death threats and other disturbing messages via Twitter after tweeting out details of a Call of Duty: Black Ops II patch that included some minor tweaks to guns. The tweets were all uncalled for and ignorant, but it’s not the first time people who play video games have embarrassed themselves or anything. It’s happened many, many times in the past. Jennifer Hepler, formerly of BioWare, received death threats against herself and her children after her work on Dragon Age II. Recently Phil Fish (Fez) announced he was quitting the games industry altogether after receiving several death threats and stupid insults via Twitter. Well, I’m sick of it. I am so fed up with these entitled jackasses who think that just because they throw a little temper tantrum the world is going to change for them. Folks, game developers do not have to answer to you just because you buy their games. Sure, it’s cool when they listen to feedback and offer answers, patches, etc., but it’s not like they have to. They could easily ignore all the hatred, but they don’t. They have e-mails, Twitter accounts and websites where anybody can say anything no matter how dumb it may sound.

I couldn’t believe the overabundance of idiocy put on display because of the ending of Mass Effect 3. I didn’t see a problem with it and still don’t, but I welcome opposing viewpoints. Differing opinions are fine, but going on Metacritic and giving a game a bad rating just because you don’t like its ending is really, really foolish. I’m sure some people who rated Mass Effect 3 on Metacritic just genuinely didn’t like it, but when you scroll through and see 20 zeroes in a row you know bullshit is afoot. What do these idiots think, that they’re going to make developers see “the error of their ways”? Do they actually think that if they complain enough they’re going to force other developers to make a mistake and cave like BioWare did? It’s not going to happen every time (hopefully it won’t ever happen again), and they can get over it. They can, you know, grow the f*ck up and let the adults address developers with their concerns and whatnot.

And as far as these people threatening other peoples’ lives? Throw them in prison. They are psychopaths. They are crazy, vile, unreasonable human beings. I’m ashamed to live on the same planet with them. I hope every person who has threatened to rape or kill another person, especially a child, is hunted down, shackled and put away for eternity.

Learn to be nice. Treat others with kindness. You learned this stuff in the third grade, people. If you don’t like, for example, the way Sam Fisher talks in Splinter Cell: Blacklist, send the developer a courteous e-mail explaining why you have an issue with it. You may not receive a reply, but that’s life. However, you’re more likely to hear back from a developer after being respectful than you are if you act like an asshole. If you take the asshole approach, you’ll just be another inconsequential jerk on the Internet and another reason for society to frown upon the video game community.

Features Editor Buddy was a journalism major at the University of Alabama. He now spends his days writing novels that will probably never get published and wishing he were an extra in an Anthony Hopkins film. He's been gaming since he can remember and has owned every console from the NES to the TurboGrafx-16 to, yes, even the Phillips CD-i. He loves all games, but his favorite genres are shooters and RPGs. His favorite game is The Legend of Zelda: Ocarina of Time.
You might also like
biowareArticlesOpinion