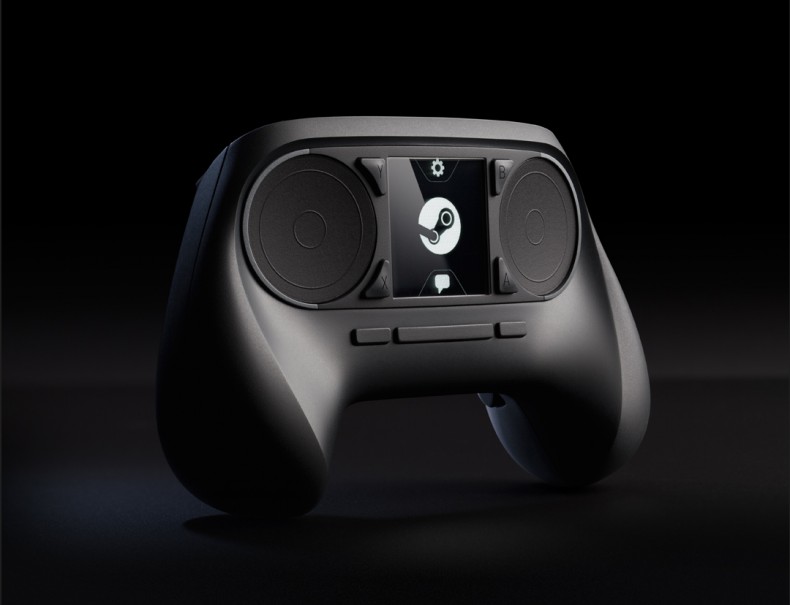 By now, you may have seen Valveâ€™s interesting new console style controller. The input device is unlike any seen before, utilizing a concave shape, two track pads, and a touch display right in the middle of it. The design has got gamers split, with some looking forward to dual-mouse input from the track pads, while others fear for less PC-centric genres getting mangled on the controller.

Speaking from the gut, I sit in between, leaning a bit toward â€œThis thing needs a stick.â€

Analog sticks have been the norm since the mid-90â€™s, and weâ€™ve all gotten used to them for most games. The resistance that sticks offer allows for a level of tactile control that many games rely on to provide a tight, responsive feel. This is an aspect that mobile games have trouble with; touch-only controls arenâ€™t resistant, and make it difficult to feel performed actions reliably. They are great for point and click controls, forcing action games into simplicity but allowing the more â€œpassiveâ€ tower defense and RPG titles to have smooth, mouse control. This is what the new Steam controller seems to be designed for.

To get around the lack of tactile feedback, the controller employs haptic motors (essentially, vibration.) This could be good for simulating buttons, which has been the primary purpose of the right side of the controller in testing, but without resistance on the left side for general movement, I expect a lot of fast-action games to attempt to support the controller and become worse for it. Slow movements in stealth game may be too difficult to appropriately gauge if you donâ€™t adjust to the controllers unorthodox feedback. Making fine adjustments to character position could become a chore. These issues might not exist in the long run, but theyâ€™re all worth thinking about. Portal 2 on the new controller.

I donâ€™t usually game on PC, but when I do, Iâ€™m using a mouse and keyboard like most. The precision of a mouse for aiming and selecting paired with the versatility of a keyboard allows some game types to have an incredibly high skill ceiling, requiring dexterous handling of controls. Valveâ€™s controller seeâ€™s to emulate the precision of a mouse, but takes a strange turn with its buttons. Theyâ€™re set between the two track pads, along with an array of triggers on the back of the controller. For aiming a weapon and shooting, this layout should work fine, but for the more complex games, I donâ€™t think the controller will be sufficient enough to handle the various inputs that are typically mapped all over a keyboard, since controls may have to be doubled up. Valve has shown a potential button map for Portal 2, though, which illustrates that this may be suitable for some games, but I can’t imagine playing a game like Devil May Cry on the controller no matter what the layout is.

Thereâ€™s merit to the track pads, considering the precision pointing controls that can be offered. Weâ€™ll probably see shooter players on the controller that are on par with the mouse users. With some adjustment, any genre could be made to work on the controller, but the learning curve, between players and developers, will be incredibly steep. Developers still havenâ€™t really figured out motion controls, despite having them for over 7 years. Ironically, I prefer playing console shooters, like Bioshock Infinite, with motion controllers, so people will just need to try the controls before they immediately write them off.

Touch controls for movement have never sat well in my hands; the DS Zelda games employ that sort of control scheme, and itâ€™s tired me to the point of not enjoying the games (and I love Zelda.) Valve obviously wonâ€™t release a fundamentally broken controller, but they donâ€™t claim that the device is going to be a solution for everyone. I agree with that. People swear by the keyboard and mouse for PC games, and typically have a traditional controller for consoles. Current console manufacturers offer the option of the familiar twin stick controls with their non-traditional controls, appropriately leaving the options open for everyone. That option should always be available, as players may find the Steam controller awesome for some games, and terrible for others. Speaking of Nintendo, their various controllers give me hope for the Steam controller. The N64, while strange, ended up being a comfortable controller that offered games to analog control. Valveâ€™s controller might do the same type of thing. Iâ€™m not too into using track pads to play games at the moment, but upon trying the controller, I might find myself enjoying it. Many developers in the industry have gotten their hands on it, and say that after an adjustment period, the controller is pretty good. Iâ€™ll have to take their word for it for now, but Iâ€™ll always prefer physical buttons and sticks.

Contributor Geron's been into games for as long as he can remember. From fighting Octoroks to studying graphic and game design at GMU, the guy's been around the block when it comes to interactive entertainment. When he's away from a console, he's working on his next piece of art. Fun Fact: his first published artwork was in issue #144 of Nintendo Power Magazine, when he was only 10.
You might also like
Controller