All My Friends Are Mics – The Lack of Local Multiplayer 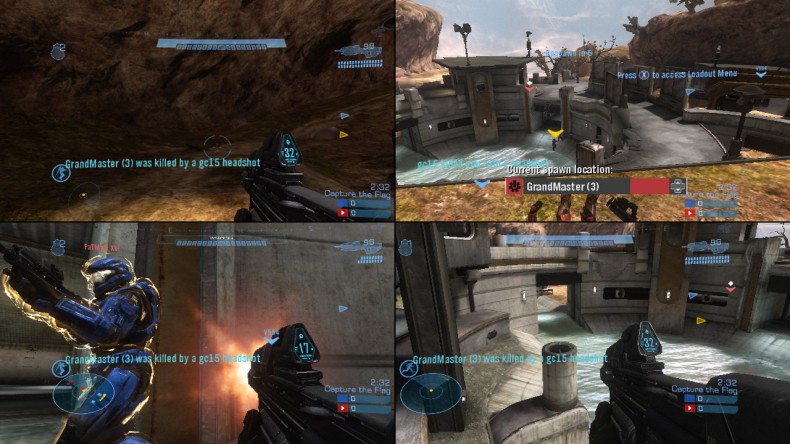 Remember a time, before online gaming existed? When the 10 year-old that cursed you out was your little brother sitting next to you, instead of some brat from another state? When multiplayer meant fighting for couch space so that you and your 3 friends could all see the TV? Life was simpler back then; nobody had to worry about poor internet connections to play their favorite multiplayer games. However, as gaming has become more focused on playing online, local multiplayer has become less and less common. Why?

Letâ€™s take a step back to the glory days of split screen multiplayer AKA the 90â€™s. In a world where Goldeneye was the new, groundbreaking game and controllers only had one joystick (feeling nostalgic yet?), playing a 4-player, split screen deathmatch was the best thing ever. It was exciting, intense, and littered with cheating and screen-looking. Some of my best memories involve me, my brother, and my cousins arguing over whoâ€™s â€œgot next gameâ€ of Nightfire (as you can tell, I played a lot of James Bond games).

That’s one way to prevent cheating…

With the shooters now, nobody wants to play them locally, and I really canâ€™t blame them. Who wants to play a local, 4-player match on Halo or COD? The screens are so small and the maps are so large that its both annoying and boring. Plus, I find it harder to see when I play locally, which I think is because there is SO much detail put into those levels. Iâ€™m not discouraging detail mind you; I love detail, but if you think about it, Nightfire and Goldeneye had little to no unnecessary objects in their multiplayer arenas. They would only have the occasional box, desk, and barrel, but outside of that, they had the bare minimum, unlike COD and Halo which has disabled vehicles, debris, coffee mugs, and a bunch of other clutter.

It’s strange to me that local multiplayer has lost so much ground as of late, since multiplayer has become such a focus for developers. Hell, Battlefield 3 had its own disk just for multiplayer, which, by the way, is labeled disk one (interpret that however you want). Editor’s Note: I just realized this as well – mind…blown. While I enjoy being able to play online with friends, and love being able to chat with them even when they are hundreds of miles away, I find that I donâ€™t have nearly much fun online as I do playing with them in person.

Other games that have been traditionally local multiplayer games have now started to move to online play only. The best example I can think of is last yearâ€™s SSX game. The game itself was amazing: the mountains were beautiful, the tricks were insane, and the soundtrack as awesome as ever. The game was just as epic as I thought it would be except for one thing: no local multiplayer. Are you kidding me EA?! That was one of the reasons I bought the game! In fact, one of my friends who also got the game ended up returning it just for that reason. It was a huge dagger in the side from an otherwise perfect game.

While local competitive multiplayer is slowly dying, there are some beacons of hope out there, ensuring that the local experience will never disappear. Perhaps the greatest beacon is Nintendo in general. While this gaming titan is trying to develop a stronger online community, games like Super Smash Brothers, Mario Kart, Mario Party, Wario Ware, Wii Sports, and Nintendoland are WAY more fun played locally. I mean, have you ever tried playing Mario Party by yourself? Itâ€™s kinda sad to be perfectly honest. The Wii Uâ€™s GamePad may have also solved the split screen issue as well, allowing one player to play on the TV while the other uses the screen on the controller. This is a game changer, people!

Microsoftâ€™s Kinect is another big positive in the world of local multiplayer. Playing Kinect Sports is both hilarious and fun with friends, and the replays are always priceless. Watching your rhythm-challenged friends try to bust a move in Dance Central will have you in stitches in no time. While a lot of the hardcore gamers give the Kinect a hard time, it is easily one of the most fun and entertaining things in the gaming world to play when you have company over.

PlayStation 3 also sports a couple of great local multiplayer games, two of the standouts being PlayStation All-Stars and LittleBigPlanet 2. All-Stars (which is arguably PlayStation’s equivalent to Super Smash Bros) allows four friends to join up and beat the living snot out of one another using some of PlayStationâ€™s most iconic characters. The co-op element in LittleBigPlanet 2 was both original and fun, and while you could play it online, it was just way more enjoyable in the company of a friend.

Speaking of local co-op, a bunch of games that are currently out (looking at you, Borderlands 2, Gears of War: Judgment, etc.)Â have local co-op, and while these games are a bunch of fun, it doesnâ€™t have that 4-player magic that we all know and love. Not many games today can deliver those experiences of slapping a controller out of a competitor’s hands, or purposely unplugging their controller to get an edge, but games that can deliver those experiences are always welcomed with open arms. As we move into a more digital world of gaming, make sure you take the time to grab a couple of your closest friends to have a nice, loud, anger-inducing round of a good old fashioned 4-player throw-down in the comfort of your own living room.

SpawnCast Co-Host/Creative Co-Director Brian is member of the University of Mary Washingtonâ€™s class of 2012 and graduated with a BS in Computer Science. He has been gaming since the first day he held an original GameBoy in his hands and hasnâ€™t stopped since. He now plays mostly shooters and RPGs on his Xbox 360 but will occasionally work in some sports or fighting games when heâ€™s in the mood. He is also a huge fan of playing marathon sessions of Legend of Zelda when the opportunity arises.
You might also like
Co-opArticlesOpinion