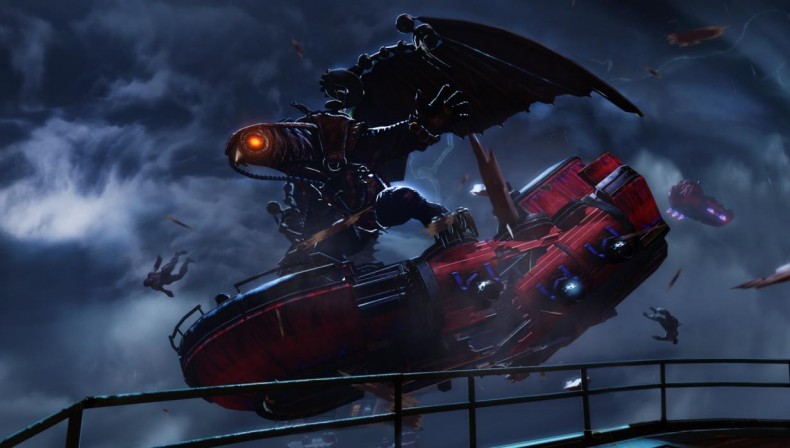 By now, youâ€™ve probably heard of BioShock Infinite.Â  Itâ€™s that game that everyone on the internet loves developed by the guys who made that other game that everyone on the internet loves (there was another game in the series as well but, if weâ€™re being honest, it was never much more than friends with the internet).Â  And if youâ€™ve really never heard of any of those games, then I have no idea how you even made it to a gaming website. So would you kindly stop overloading our servers and get out?

In the latest title of this globally acclaimed series, you might be wondering what my favorite part of the game is (chances are you donâ€™t care, but Iâ€™m going to tell you anyway).Â  Is it the gripping story that had me literally lying awake at night (even after reading this great spoiler thread that explains it all), trying to get my feeble mind to even understand a miniscule portion of what the hell I just watched?Â  No, because it hurts my brain just thinking about the ending.Â  Is it the stellar gameplay that is paced perfectly as it makes you scavenge, upgrade, burn things, shoot people, be a badass, and die?Â  No, because now I canâ€™t replay the original BioShock without wishing I still had Bookerâ€™s awesomeness. Above: Who I now consider myself to be playing as in BioShock

Is itâ€¦ you know what?Â  Iâ€™ll just tell you, because nobody in their right mind would ever say this.Â  The best part about BioShock Infinite is that trippy green arrow that directs you toward your objective after pressing up on the d-pad. Erâ€”no, not that Green Arrow

Now please, put away your pitchforks and incinerate plasmids and just hear me out.Â  You may love the story, the vigors, the looting, the characters, the twisted city of Columbia, and everything else that could possibly be squeezed into this game, but the navigation arrow lets you see so much more of that.Â  Yes, the purpose of the mechanic is to lead you to your objective, which is why I love it; so I know exactly where not to go.

And, no, this isnâ€™t some kind of statement about refusing to conform and do what Iâ€™m told.Â  I made a stand for that when I refused to laugh at the Taylor Swift goat video everyone is rambling on about.Â  Think about how much you miss in any BioShock game if you never stray from the beaten path: audio journals that give detailed backstories of the world and characters; equipment; money; ammo; easter eggs; pants-crappingly scary scares.Â  Youâ€™re certainly welcome to go through the game without any of this, but without it youâ€™re just playing another shooter.

In any game that has any exploration at all, my point of attack is always this; find the right way to go, and immediately double back and take everything from all the dead ends.Â  Having something conveniently point me in the wrong direction is a time-saver, and one which more games should adapt to more often.

Some games have toyed with the idea, but it never really seems to hit the proverbial paydirt as much as Infinite.Â  Both the original BioShocks had a compass-like system at the top of the screen to show your next objectiveâ€™s location, but it was ever-present and slightly annoying. And how do we know if itâ€™s pointing to true north or magnetic north?

The Elder Scrolls V: Skyrim, which, you know, had a small amount of exploration, gave you the Clairvoyance spell early in the game to help you navigate dungeons and caves.Â  In reality it was a great concept, and I used it in much the way I described above, but the fact that it took up a hand slot and drained magicka left you ill-prepared if you happened to run into a bandit or a few trolls.

Enter BioShock Infiniteâ€™s single greatest feat; a controllable, helpful, always-at-the-ready green arrow that makes finding all the gameâ€™s secrets easier than ever!Â  The simplicity of a navigation system is something you rarely hear praised, and thatâ€™s probably because nobody really cares.Â  But I do.Â  And youâ€™re reading my Opinion Article, so the jokeâ€™s on you.Â  Praise the green arrow! Former Contributor Nolan Alber is a college student from North Dakota. He enjoys rescuing puppies from burning buildings and beating up criminals on the streets, and often lies about his interests to make himself look better. Nolan is an avid gamer on PlayStation 3 and PC. He impulse-buys more video games than he can actually play, and is a fan of shooters and fighting games (even though heâ€™s terrible at the latter).
You might also like
ArticleArticlesOpinion