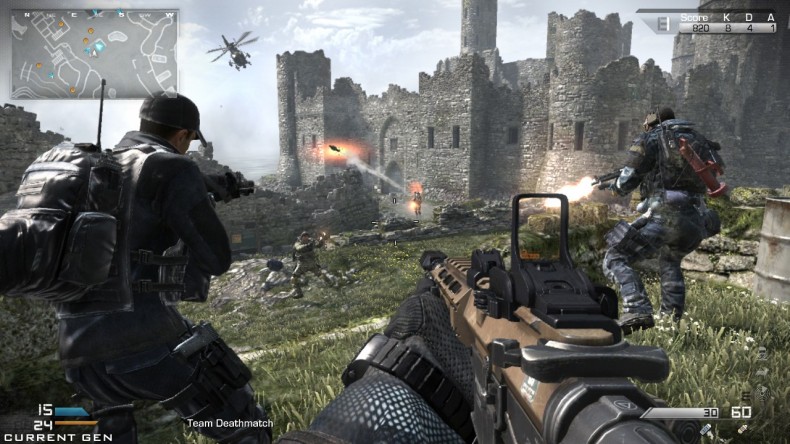 Call of Duty: Ghost players on each of the two next-gen systems have been having quite the different experience after each version of the game was patched. Now usually, patching a game is meant to improve the gameâ€™s performance, and possibly even add some new features to the game, gameplay-wise, performance, and even presentation-wise.

But with Call of Duty: Ghosts, the patches for the Xbox One version and the PlayStation 4 version accomplish two very different things.

When the PlayStation 4 version was patched, Call of Duty: Ghostsâ€™ resolution was bumped up quite a bit, from the last gen-ish 720p resolution to a more acceptable 1080p, keeping the game in line with most launched (and planned-to-launch) PlayStation 4 games. The patch improved the gameâ€™s performance enough to make it somewhat comparable to the PC version of Call of Duty: Ghosts

The patch for Call of Duty: Ghosts on the Xbox One version, however, has a complete opposite effect, deteriorating frames per second down by 15 â€“ 20 fps on many levels, especially when the playerâ€™s trying to at the whole level, ADSâ€™ing, or looking through a sniper scope. There have not been any improvements to the resolution either. Check out the video below for the drastic difference and drop in frame rates.

And quite a few gamers on the Xbox One are still experiencing these issues:

So what do we make of this? Is the Xbox One a harder system to optimize for games? Is the Xbox One team at Infinity Ward doing a poor job of optimizing patches for the Xbox One version of Call of Duty: Ghosts? It remains to be seen. Hopefully, Xbox One gamers wonâ€™t have to suffer through these issues much longer and Infinity Ward releases a proper patch that fixes the previous patchâ€™s issues, and improves upon the base game itself. Infinity Ward have yet to comment on the post-patch frame-rate issues.
4 people like this
Articles, Opinions
Call of Duty GhostsInfinity WardpatchPlayStation 4ps4xbox one

Founder/Consultant Growing up in different countries, Karam has a unique global perspective about gaming. He brings with him that set of eyes and ears that can look at the state of gaming from afar. His gaming loves cover just about every genre, and he is a constant presence on Xbox Live and PSN. Karam is a Systems Administrator by day and lives in Georgia with his wife and three children. By night he transforms into Aye Karamba (Live) or Aaqiloon (PSN), and his virtual aliases live online.
You might also like
Call of Duty GhostsArticles