Can Saints Row IV Kill Its Own Spark? 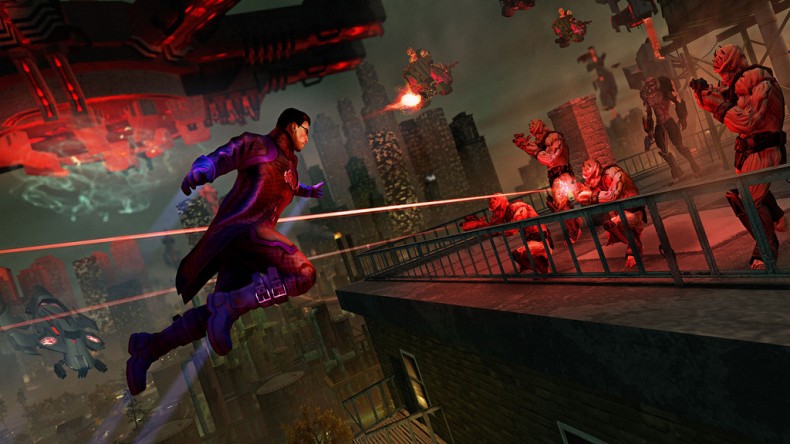 Not that long ago, Saints Row IV was unveiled to the world, generating much ado about the killer sandbox title. Â A trailer showcased plenty to look forward to, although minimal information about the title was actually given. Â Finally, a little over a week ago, a PAX East gameplay video surfaced on YouTube, which you can see below.

It took me awhile to gather my thoughts. Â There was a gun that inflates heads until they pop, a deep weapon upgrade system, morphing aliens that hunt you down, a mech suit, and super powers. Â And no, I didnâ€™t get this confused with a Power Rangers game; this is full on Saints Row. Â Iâ€™ll admit that, at first, I was blown away at how much fun it all looked. Â But then I started to get a little worried…

At some point, it feels like Saints Row has started to rely heavily on gimmicks. Â What was once an obnoxiously idiotic (but still inexplicably awesome) crime simulator has progressively gotten more identifiable by its craziness, separating it from nearly every other sandbox game out there. Â It never takes itself too seriously, which is why the series is a blast to play. Â Whatâ€™s so scary then, you ask? Â Because, young grasshopper, too much of a good thing is rarely ever a good thing.

The unstoppable lead character, improbable story events, the ludicrous Third Street Saints; these are all at the heart of Saints Row. Â But constantly trying to outdo previous efforts by bigger twists and crazier gameplay wonâ€™t necessarily make for a better game; its exactly how a developer can figuratively jump the shark.

Not to mention that, after this fourth installment, whatâ€™s next? Â Volition will once again have to re-raise the bar of the series, meaning what? Â The Saints take over Mars? Â Give the player a Transformer to drive? Â A simultaneous zombie, werewolf, and vampire plague?

Grand Theft Auto, a similar series you might have heard of, constantly attempted to top each previous entry. Â By the time Rockstar got to San Andreas, they decided it was finally time to move in a new direction. Â One realistic, gritty reboot later, we have an award-winning title that was critically acclaimed, Grand Theft Auto IV. Â Saints Row doesnâ€™t have to take this route, and I doubt it ever will. Â But going in the complete opposite direction could kill off this lovable, frantic, tongue-in-cheek sandbox series. Â If itâ€™s any consolation, though, the new dubstep gun is sexy.

Former Contributor Nolan Alber is a college student from North Dakota. He enjoys rescuing puppies from burning buildings and beating up criminals on the streets, and often lies about his interests to make himself look better. Nolan is an avid gamer on PlayStation 3 and PC. He impulse-buys more video games than he can actually play, and is a fan of shooters and fighting games (even though heâ€™s terrible at the latter).
You might also like
Grand Theft Auto 5ArticlesOpinionNolan Alber