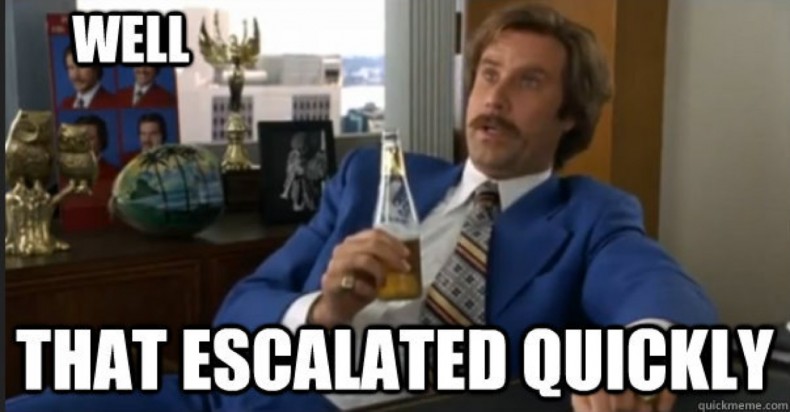 Time for a Reality Check

There was an article the other day about Microsoft stating that the Xbox One was sold out at retailers. People began posting pictures of stacks of Xbox Ones on shelves and links to places were the Xbox One was available to buy. As expected, these comments were all marked as ‘trolling’ and people were bubbled down (on N4G). After a while, these comments were unmarked and the bubbles were returned, which is great and the right thing to do, but it does make you wonder; in what reality is that ever even considered trolling in the first place?

Just because you don’t like something doesn’t mean it’s trolling. Period. Gaming seems to have gotten to the point where anyone who points out or posits a fact about certain news or movements in the gaming world that theyâ€™re not in direct support of is considered trolling. Even if it’s factual and the truth. I constantly hear people saying “you need to be neutral for people to take your opinion seriously”. So let me get this straight, I have to be insincere about my feelings, thoughts and opinions to be taken seriously when talking about gaming?!?!? The best part is, this rule doesn’t apply to anything else, sports, politics, faith, music, food, peopleâ€¦really anything, except gaming. Nobody ever says to you “You like the Miami Heat, so you have to like OKC or else I can’t take you seriously”. No. More often you hear people say I hate the team, that player etc.

So why is gaming so affected when other areas of life get a free pass? I have no idea. But I do know this: people use the word trolling and fanboy as a way to escape a conversation or debate that they have no argument to counter. We are essentially protecting the weak-minded, while punishing those who bring the problems with whatever is being discussed, to light. Am I saying no one trolls or no one is a fanboy? No, I’m not. IMO, trolling is saying, for example, that the “Xbox/PS4 sucks” and things of that nature. There is a big difference between that which adds nothing to a conversation versus someone actually trying to insert some factual tidbits, or at the very least, contributing some intelligently guided tidbits, especially without all the vitriol of personal attacks on the commenter him/herself. Imagine if something, like say….politics worked like that (Editorâ€™s note: it almost doesâ€¦these days mentioning facts in politics gets some people in an uproar). People would be arguing constantly. Ideas are meant to be challenged and put on the spot, but intelligently. It’s literally what drives our progression as a species on this planet. Look at the PlayStation 3 for example; all the criticism thrown at it eventually gave us, along with fierce competition by the Xbox 360, made the PlayStation 4 what it is today.
Look at the Xbox One for example; if no one challenged Microsoft, theyâ€™d be dictating the way you play digital/physical games right now. All those who were okay with Microsoftâ€™s initial plans were the ones who were not doing justice to the rest of the gaming community by not challenging the status quo. The people who spoke up and risked unorthodox retaliation against what was wrong were the ones who saved our asses. This is not called acting like a fanboy; this is called calling out notable people/companies intelligently and spreading the truth. And about being neutral and supporting all systems (like a real gamer), I own a 360 as well. I have since it launched in 2005 and honestly the first few years on the 360 were great. BUT in my eyes, especially after Microsoftâ€™s Xbox One reveal, supporting MS is not an option at this point. How is me supporting a company that just tried to take away my rights as a gamer (before MS succumbed to an explosion of consumer anger and retaliation), and constantly lies to me and many others, make me a real gamer? If anything, I feel like it’s the exact opposite. If you don’t feel the same way as I do, that’s fine. But it doesn’t mean I have to feel the way you do and it doesn’t mean I’m not allowed to talk about it. That would be what you call censorship.

I used to post lists of the PlayStation 4 specs vs. Xbox One specs. This made people very angry. 98% of the replies were personal attacks, the other 2% were stupid analogies about cars. Regardless of this being factual information (which has now proven w/ multiplatform titles) people would say I was trolling. I wasn’t (with those comments at least). I was providing information Xbox fans just didn’t want to hear/believe. Again that doesn’t make it trolling. I was trying to relay factual information to the masses and most from the Xbox One crowd were just not having it. Listening to facts, that is.

Gaming fan culture and exchanges need to change, and quickly. This is not a good path for gaming culture to walk down through. Accept factual information from all sides, and listen, and more importantly, understand them regardless of who is saying it, especially if itâ€™s irrefutable factual information. And never be afraid to supporting what you like speaking up about what how you feel; just make sure that you are reasonable and have proper etiquette when talking, and more importantly, listening and understanding. Facts are facts and no amount of crying, disagreements or personal attacks will ever change that. Be yourself; but also be accepting of proven facts, and be considerate about other people and their views as well. They just might be different than yours.