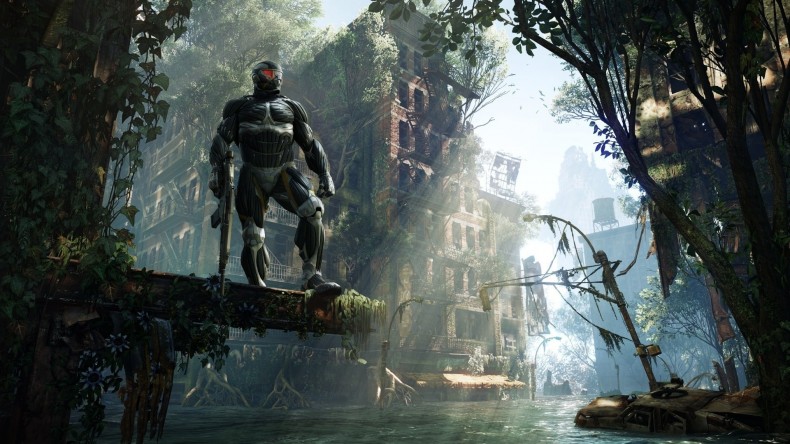 Headshots In Your Hands

Way back in January 2011 after the now President and CEO of Sony, Kazou Hirai, stood up at the PlayStation Meeting in Japan and officially unveiled the PlayStation Vita – or NGP (Next Generation Portable), as it was then known – there was one major design choice concerning Sony’s second foray into the handheld console market that immediately stood out for me while I pored over the published screenshots: dual analogue sticks. As much as I adored the PSP, weird sliding analogue nub and all, the lack of a second means of precision control was a major sticking point even for me.

For my favourite PSP games of all time – Mega Man: Maverick Hunter X and TOCA Race Driver 2; the former is currently available on the Vita PSN Store, so go download it because it’s amazing – this was fortunately not an issue. There were a plethora of other games, however -Â Grand Theft Auto: Liberty City Stories, Daxter and Resistance: Retribution to name some off the top of my head – in which thatÂ extra degree of control and more intuitive means of maneuvering the in-game camera or aiming your weapon would have been extremely beneficial. Many developers of course made the effort to work around this, but theseÂ admirable attempts at circumventing the hardware omission, usually resulted in control schemes that interrupted the flow of gameplay or, worse still, implemented auto aim. Still, it could have been worse…

But now, with the Vita, any qualms players had with their handheld console have been well and truly quashed. For the first time ever, gamers on the go had a device that translated home console controls perfectly into games they could take with them anywhere. And the big genre that I and many others really expected to soar on the Vita? First person shooters. All of a sudden, the notion of being able to sit on the toilet and shoot guys in their alien/terrorist/Nazi (delete as applicable) faces didn’t seem quite so far-fetched. WellÂ in theory, at least, because despite its competition-dwarfing specs and that Godsend of a second analogue stick, the Vita hasn’t exactly been inundated with FPS’s at all, let alone decent ones. Only Killzone: Mercenary has garnered any kind of critical success. Besides that we’ve had Resistance: Burning Skies with its admittedly solid gameplay and imaginative weapons, yet questionable design choices and production values; and the less said about the abhorrent, bug-riddled abomination, Call of Duty: Black Ops Declassified, the better. The dearth of FPS’s on Vita is something that I for one would certainly like to see rectified. I’m not exactly the quickest sharpshooter or consistently skilled soldier in the online arena – join me on Battlefield 4 on PlayStation 4 for proof of that – but I enjoy the genre immensely and I’m inarguably not alone in that regard. It’s no secret that first person shooters are huge business; you only have to read the annual sales figures of Call of Duty and the top twenty charts every week to see that. It’s also common knowledge that the Vita is struggling to gather momentum sales wise save for a significant sales spike coinciding with the launch of the PS4 and bringing in the big guns – pun absolutely intended – could be just the shot in the arm the Vita needs. But for that to work, these games should ideally take some key factors into consideration.

There’s one major blunder repeatedly committed by developers when crafting games on portable systems: they’re not tailored to portable play. It’s all very well and impressive when a team manages to squeeze some massive hours-long epic onto a Vita game card, but people don’t always have hours-long chunks of time to play. Sure, I can sit down for – battery permitting – hours at a time playing my Vita, but that’s when I’m lounging around on the sofa at home. What about when I’m out and about, when ploughing through hours of content in one go just isn’t feasible? The Vita isn’t exactly world renowned for its extensive battery life.

Basically, it’d be cool if a new FPS on Vita took this conundrum into account by giving us something that can either be played for extended periods of time or in short bursts while still being able to turn the Vita off to conserve battery power. What I’d like to stress is that this doesn’t necessarily merely equal a short game with tons of replay value; there’s no reason why a game can’t provide a lengthy experience while still tailoring itself to being played in shorter stints.

Black Ops Declassified stumbled at this hurdle, with Activision and Nihilistic touting the old “perfect for playing in bursts” spiel, only for players to later discover that this equated to the game being comprised of ten missions each between two and ten minutes long – more frequently clocking in around the lower end of the scale – resulting in a single player campaign that could easily be polished off in under an hour.Â There are plenty of existing FPS franchises that boast gameplay ideal for those who frequently only find themselves able to play for short periods of time or just want to fire up a game on their daily commute. My suggestion? Serious Sam. This sort of thing is fun no matter how long you do it for.

Serious Sam doesn’t concern itself with complex narratives or multi-faceted mission objectives; on the contrary, it revels in providing the purest kind of first person shooting action there is. With either short missions or liberal use of checkpoints, its blisteringly fast gunplay against overwhelming hordes of relentless alien opponents lends itself perfectly to either lengthy play sessions or a few minutes of murdering monsters in their droves.Â

What brings people flocking to FPS’s in their millions, ready to splash their cash on the latest title and subsequently every bit as eager to throw more money at additional downloadable content? Multiplayer, of course. And for my money, no game does online multiplayer as well as Battlefield; it eschews the uncivilised lone wolf/headless chicken chaos of Call of Duty in favour of large scale, vehicle infused, objective driven warfare that requires real teamwork and communication if your team is to emerge victorious. Battlefield on PS Vita: about as likely as Call of Duty taking a year off.

I’ll freely admit that Battlefield on the Vita would only realistically be achieved by toning it down somewhat. A lighter player count, less graphical detail and the elimination of the series’ trademark environmental destruction might seem like they’d all add up to a diluted experience, but I’d personally overlook these concessions if the right developer were to take the helm on Battlefield Vita and make every effort to ensure it strikes the right balance between making sacrifices to suit the hardware limitations and preserving that distinct Battlefield flavour.

The Vita is capable of handling multiplayer well, as it proved with last year’s Killzone: Mercenary. Despite shaving down the supported number of players, Guerilla Cambridge’s intelligent map design went a long way to ensuring that the series’ multiplayer atmosphere remained as intact as possible and there’s no reason why the right team of developers given the time and resources – something EA isn’t exactly lacking – couldn’t work the same magic on Battlefield.

Oh, and if you really want to promote communicative teamwork, EA, then package Battlefield Vita with a mic and headset. SOCOM: U.S. Navy SEALs Fireteam Bravo for PSP did it and that game was boss.

Back in November last year, Media Molecule released what is without a shadow of a doubt the Vita’s greatest exclusive game in the form of Tearaway, and the single biggest thing that really made it stand out for me was that it was clearly built from the ground up with the Vita in mind. This wasn’t a game that had been shoehorned onto the hardware with awkward touch screen controls bolted on; every single component had been carefully thought through until they formed a cohesive and thoroughly entertaining whole. A Media Molecule developed FPS would be the best thing ever.

What I’d love to see is a FPS developed by the same creative geniuses behind Tearaway and LittleBigPlanet that pushes boundaries and challenges genre conventions, utilising every feature of the Vita’s hardware in ingenious and intuitive ways that completely shakes up what we think a FPS should be like. Although an all new franchise would be preferable, if an existing IP were to be developed for Vita and bring us a refreshing new take on the FPS, then the most obvious choice would be BioShock; Ken Levine has been vocal for a long time now about the possibility of a BioShock game appearing on Vita and a collaborative effort between him and Media Molecule – whether it concerns BioShock or something new entirely – could bring about something truly special.

If you’ve played Killzone: Mercenary, then you know first hand how visually impressive Guerilla Cambridge’s blockbuster FPS is; it’s the most detailed and realistic looking game on the Vita to date and a shining example of what’s possible on Sony’s handheld when in the hands of the right developer. It might not be the most original or innovative game ever made, but its core shooting mechanics, touchscreen implementation and online multiplayer are all spot on. But what if there were to be another contender in the battle to be crowned the most technically astounding portable FPS? Crysis has always been a technical masterpiece.

If there’s one studio that regularly raises the bar in terms of visual prowess and goes that extra mile to squeeze every last drop of potential out of a console, then it’s Crytek. The German developer worked wonders on Crysis 2 and Crysis 3 last generation, while Ryse: Son of Rome sits head and shoulders above every launch title not just on Xbox One but on PlayStation 4 as well in terms of sheer jaw dropping visual excellence. So if anyone can turn heads and really make the Vita sing, you’d better believe that Crytek – if ever given the chance – would have a damn good try.

Crysis on Vita wouldn’t have to reinvent the wheel; it may not be to my tastes – I’ve always found its fairly dull narrative and black and white illusions of tactical choice as major turn-offs, personally – but Crysis has a more than moderately sized following. As long as it maintained the formula that has made it so popular and showcases the power that’s lurking under the Vita’s hood, Crysis on Vita could provide Sony’s struggling handheld with a major boost.

I’ll level with you: I just really love Duke Nukem and I waited fifteen years for Duke Nukem Forever only for it to leave a sour taste in my mouth; it represents the most overwhelming sense of disappointment I’ve ever felt after finishing a game. Â So I really, really want Duke Nukem on Vita. I’ll even settle for a Duke Nukem 3D port.

Former Staff Writer Mark hails from Cardiff in the UK and his interests include videogames (obviously), Marvel Comics and playing Pathfinder with his wife. Yeah, his wife. You WISH your wife was that much of a nerd. He also has an unhealthy obsession with Sonic the Hedgehog, which has resulted in him listening to the Sonic Generations soundtrack on a loop since he bought it. He no longer has any neighbours.
You might also like
articlesArticlesFeaturesMark Reece