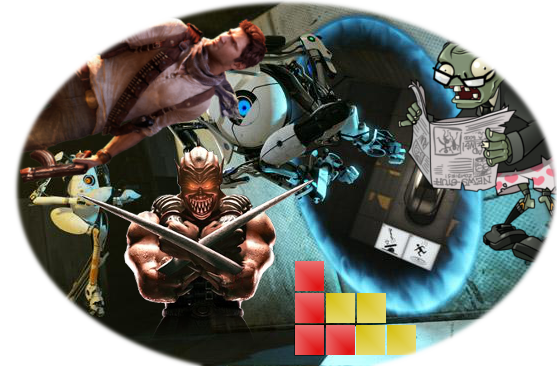 Every once in a while, a video game developer will boldly go where no other game has gone before.Â  They take one completely unique genre, rip out the defining characteristics that are its heart and soul, and surgically attach it onto a game youâ€™d never expect.Â  And every once in a while, like the games listed above, it totally rocks.

Usually, the success of these games spawns clones and essentially moves the industry in a more progressive direction.Â  Genre crosses have a ton of potential, and I have three in mind specifically that would be amazing.Â  Unfortunately, though, the universe doesnâ€™t like its peas mixed with its porridge; so itâ€™s very unlikely weâ€™ll ever see them.Â  But oh well, hereâ€™s hoping!

First of all, if you are unfamiliar with the rather secluded titles of NBA Street, NFL Street, and FIFA Street, the gameplay can best be described as the illegitimate lovechild of a proper sports simulation and hallucinogenic drugs.Â  And yes, it was as awesome as it sounds.Â  Check out this video to get a feel for the craziness that ensues:

Combining heavy RPG elements into a jock-happy world may seem like an exercise in stupidity, but sports games are much closer to their anti-genre than you think.Â  Take Madden 13, for example; the franchise mode allows the player to:

If that sounds familiar to all the Final Fantasy hounds out there, it should.Â  The actual gameplay of sports titles may revolve around scoring points while white players sit on a benches, but plenty of RPG features would fit in seamlessly if they were fully fleshed out.Â  Adding in a cartoony vibe (like the gameplay of Street) would allow character progression to remain as extravagant and unique as it is in RPGs, without sacrificing core gameplay.Â  Give me a perk that makes opponentsâ€™ ankles literally break off when I do a crossover, and Iâ€™m sold.

The fact that I care about sports titles and role-playing games so much that Iâ€™d want them together already puts me in a very select group of gamers.Â  And by â€˜select groupâ€™ I mean â€˜me, myself, and I.â€™Â  The game would take such a risk at releasing into a microscopic market, it has little chance of surviving outside of an independent title.

â€¦the tactics-heavy Risk with the delightful squad-based skirmishes of SOCOM.

Strategy games are a lot of funâ€¦ for the right customers.Â  They cater to a crowd that likes to outsmart their opponents in due time.Â  While the subgenre of RTS (real-time strategy) games bring more action to the table, they still require patience, planning, and a hell of a lot of time to get good at.

This is where a tactical shooter would fit in perfect.Â  Think about it like this; you control several different groups of soldiers and lead them into a tactical position over enemy squadrons, exactly how most current strategy games are already set up.Â  However, instead of ordering your friendlies to spray their weapon wildly at foes to diminish their health, both players are transported into their respective squadsâ€™ shoes to engage in combat.Â  A battlefield shifts into existence and you take the role of a commander in a third-person perspective, where each player attempts to command their squad to victory and eliminate the otherâ€™s squad.Â  The winning team takes the space, and any squad soldiers lost during the scuffle are dead for the remainder of the match.

A game along these lines would have two advantages: Â Firstly, strategy newcomers that have a background in shooters wouldnâ€™t get completely embarrassed by a veteran, making the game more accessible to everybody.Â  Secondly, it would break up the monotonous gameplay many associate with strategy titles.

Well, it could, but probably never on a grand scale.Â  A single round of any strategy game could potentially last hours depending on how the players play.Â  If these games also included a deathmatch for every single skirmish, youâ€™d be looking at two-three hour matches on average for conservative players.Â  Unless the amount of squads per player is reduced to somewhere under five, the accessibility of this title would drop immensely.

â€¦the open freedom of Saints Row or Grand Theft Auto, but have snippets of every single other genre tossed in just for good measure.

Just imagine this series of events;

Youâ€™re fresh off a spree of running over hookers and stealing cars, when you decide to break up the murderous pace a bit. Â Setting a waypoint to a local bar, you head over and start a Saints Row-type activity: â€œHeadbanger,â€ as this particular minigame would be known as, encourages you to earn some extra cash by playing with your band, â€œThe Blood-Curdling Aardvarks.â€Â  You dust off that old Rock Band controller resting in the corner of your living room, and suddenly your sandbox adventure morphs into a music/rhythm escapade, ending with you failing a Metallica song six dozen times.

After accepting that you have no future playing the plastic guitar, you switch over to your arcade stick and exit the bar.Â  This time youâ€™re in the mood for a little more action-oriented activity.Â  You sprint across the street to an illegal underground fight club, where dark, gritty versions of Stone Cold Steve Austin and Liu Kang are looking to go a few rounds.Â  In combat that is an amalgamation of Street Fighter, Tekken, UFC Undisputed, Persona Arena, Double Dragon, and Twisted Metal, you take each of them down for some delicious prize money (which you will later use to build your own city from the ground up).

When the repetitive grind of getting combos wears on you, though, you decide to walk back out into the street.Â  But â€“ GASP! â€“ the city is now in the middle of a zombie apocalypse!Â  You call up three of your closest friends, invite them to join your game session, and together you scavenge for supplies and wreak havoc on the undead.

Oh, and this all happens in the span of about twenty minutes.

Take your pick; the excruciatingly enormous amount of man-power the game would take to put together; a budget that would make the United Statesâ€™ debt look like a bar tab; a longer development time than Duke Nukem Forever (assuming thatâ€™s possible); or maybe just that fact the human race would die out, because no guy would ever put down this game long enough to reproduce.

We all know how crazy this concept is, which is exactly why itâ€™ll never happen.Â  As long as I was making a fictional list of video games, though, I figured Iâ€™d go out with a bang.Â  Oh, which reminds me; the game would also include a â€˜hot coffeeâ€™ modâ€¦ if you know what I meanâ€¦

Former Contributor Nolan Alber is a college student from North Dakota. He enjoys rescuing puppies from burning buildings and beating up criminals on the streets, and often lies about his interests to make himself look better. Nolan is an avid gamer on PlayStation 3 and PC. He impulse-buys more video games than he can actually play, and is a fan of shooters and fighting games (even though heâ€™s terrible at the latter).
You might also like
open world