It’s been over a decade since the initial release of the critically acclaimed Knights of the Old Republic, a Star Wars masterpiece developed by BioWare. Since then, the strong replayability element of the game has continually pulled in even more geeks and gamers like a tractor beam. With its nearly flawless mechanics and revolutionary concept at the time, many RPG titles still don’t come close to its grandeur.

What Knights of the Old Republic proved is that a linear plot can be influenced to such an extent by the actions of players in certain situations and their responses in dialogue with characters in main quests, side quests, and even the player’s own rag tag party, can lead to progressively larger choices that will ultimately end up deciding the fate of the galaxy.

For more about Knights of the Old Republic, watch this spoiler-free review. Be warned, you’ll feel the excessive need to play it after watching.

Due to the overwhelmingly positive reception of the first game, a sequel was developed and released by Obsidian. It almost succeeded in living up to the legacy set by its predecessor, but soon after the game released, one flaw in particular became very apparent towards the end of the game: it was rushed to meet its release deadline. Although this didn’t have a profound effect on the gameplay experience, it certainly left out some extra qualities that could have enabled it to perhaps even surpass the original game. 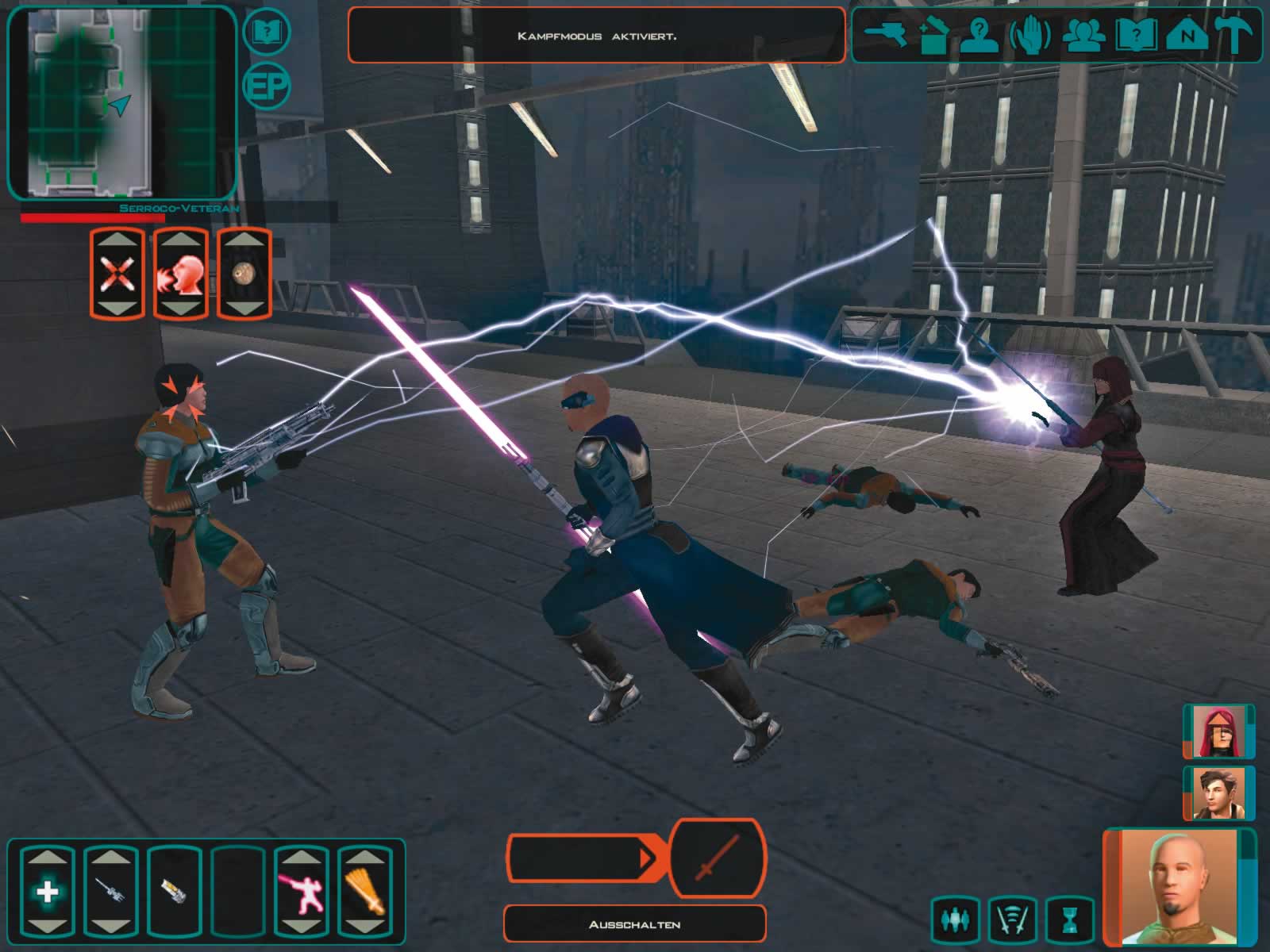 Force Lightning has always displayed much potential for some shock therapy.

But before I get carried away, the real focus here is actually the potential for a KotOR III; so yes, I’m telling you to go and play Knights of the Old Republic and its sequel, The Sith Lords. It’s definitely worth it, and after you’ve finished, you’ll be begging for a third game like so many others. But there is one more issue to address. The MMO simply called The Old Republic. To say the game is an issue is a little too much. The Old Republic garnered a lot of positive feedback and boasting a phenomenal rate of new subscribers. It even won the Guinness award for the most dialogue voice lines ever to be in a game (standing at over 200,000 lines done by only a few hundred actors).

After a while, though, it rapidly started to lose subscribers. I’d just like to put into perspective just what a colossal impression The Knights of the Old Republic made on gamers and non-gamers alike; an MMO with hundreds of hours of content more than the classic KotOR, including better graphics and featuring plenty of PvE scenarios as well as PvP, has less of a replay value than a single player game. How is that? What should have been a KotOR III of sorts has turned into a let-down, with many fans voicing their displeasure at the turn of events concerning Revan, a key figure and plot central of the first KotOR game, which changed him a bit from a fabled war hero to a crazed renegade with a lightsaber.

Simply put, it’s the small things that made all the difference in KotOR. It managed to be different, and yet keep that popular Star Wars feel in every atmosphere. In addition to that, players could feel more intimate with their character, like it’s really them behind the face of the protagonist, making choices that influence not only themselves, but the lives of their party members and the galaxy for that matter. In the Old Republic MMO, with thousands of other players running around and completing the same quests, defeating the same enemies, it felt like that typical scenario of a rebellious Jedi Padawan; insignificance on the grand scale of things and the feeling of being held back.

In KotOR, players have the freedom to make and break as they please. Their potential is unlimited, and their power is amazing. Dialogues with NPC’s felt really engaging, and the sensation of acquiring a lightsaber was so thrilling. Then, I’d like to meet the person who’s managed never to laugh once at the assassin droid, HK-47’s dry, matter-of-factly sardonic humor.

So, what would a KotOR III essentially consist of? Imagine this: remember the canceled Star Wars 1313, that was to put players into the shoes of a bounty hunter operating on the capital planet of Coruscant? What if the element of freedom was taken to its limit by hauling in all the successful qualities of the first game? Keep the choices of defecting to the Dark Side, or redeeming oneself in the Light Side, but add a greater emphasis on the shades of grey in between. Then, add the extensive option to customize one’s own starship that will serve as a base of operations of sort.

You can view demo clip of the (sadly) cancelled Star Wars 1313 below:

What we’re sitting with so far will be a rogue born and raised on some random planet, discovering he has Force powers. Also, since Revan took the spotlight for one of the Old Republic era’s most powerful, let the continuation of his tale be the setting, and the rogue will be discovered to be an acquaintance of some sort to Revan and a renegade Jedi Order. With the added customization options and greater influence in the galaxy’s way of things, what if players could not only craft their own lightsaber and go either Dark or Light Side, but also focus on the non-Force user side of things, like having the freedom to deal with the everyday choices of civilian life? Maybe you want to end up in a local security force, or negotiate on the black market, being able to craft even ranged weapons, and discover new aspects of the Force that lends itself to a greater awareness of things non-Sith or Jedi. You would be able to do any of that.

The intimacy with the character will surely be a trait that people would want to have back, but the option for co-op with a friend or two could always be open. Slicing up enemies with a lightsaber and pretending you’re an ork on a rampage, or feel like the Rambo of Star Wars and use the Force to see enemies through walls for those extra epic sniper shots. When you’re done, you can step back into solitude and feel like you’re back in KotOR, with even more freedom, and a greater impact on the universe you know and love, set in an artifact of your own design with even more replay value than ever before. Such is my idea for KotOR III, and it’s a game we’re all still hoping will come to life.

Anything you’d like to see in particular? Speak your mind, my apprentice!

Senior Staff Writer Rudolf is a Journalism graduate who has an obsession with video game collectorâ€™s editions, which is matched only by his objective of moving to Canada and firmly establishing himself as a games journalist. His taste for adventure can only be satisfied by action-adventure games, sizzling steaks and dreams of gliding through the air on a snowboard.
You might also like
biowareArticlesOpinion