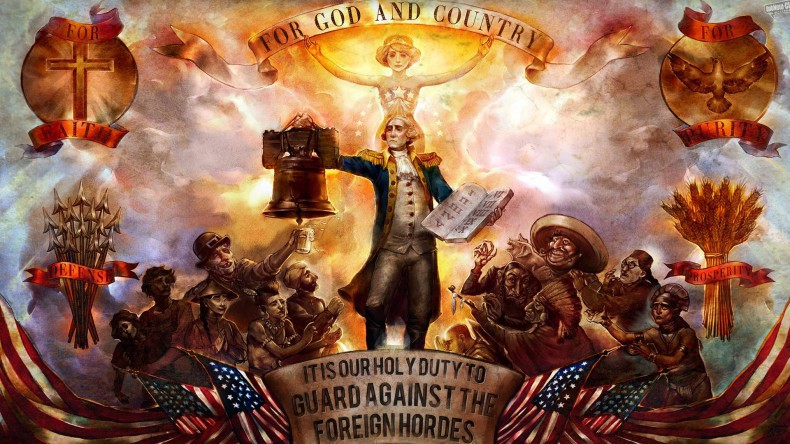 Bioshock Infinite  is the sequel to 2007’s unexpected hit Bioshock  and continues the spirit of the game. Both are about a fantastic city that is built around a corrupted ideal. But where the original was an achievement in storytelling and masterful execution, Infinite  is much less outstanding. The game suffers from the same problems that many large name games do. While the game does boast such positives as fun and action centered gameplay, a stunning visual and level design, and some truly great moments (the Comstock House section immediately comes to mind), other and more poignant areas of the game fall far shorter.

At no point while playing Bioshock  did I stop and think, “Gee, I wish there was a spunky female sidekick to incessantly babble at me.”

Those of you who wanted the opposite were not disappointed by Infinite. Your companion, Elizabeth, will stop at no end to annoy you with whatever mundane observation about the environment she is having at any particular moment. Her character starts as a naive, sheltered girl and moves to embittered idealist, but to call her struggle a character arc would only be true in the simplest definition of the term. At all points she is a very simple character and really only makes that one shift.

She’s not the only character who is ill-defined. Fitzroy, the rebel leader, is an angry anarchist. That’s it; she receives no other distinguishing characteristics. The game also can’t seem to decide how it wants the player to feel about the Fitzroy and the rebels. The game is very definite that the society of Columbia is in the wrong, but the rebels are much more murky. The game repeatedly shows how poorly those of the lower class are treated, but then they’re also portrayed as bloodthirsty savages in the next scene.

If the game is trying to make a statement about extremism it falls flat, as the dichotomy it sets up is ultimately one between order and chaos with no in-between, suggesting that the game is advocating some kind of nihilism. Most characters are given a similar treatment. Fink, for example, I thought was going to be interesting. He was a scumbag, but he was also a schemer. He had more going on than he was letting on and he..oh wait, he dies before he really gets any screen time. The Lutece Twins were the only characters that really had much going for them, although most of their story is told through the hidden voxphones so the player will only know it if they are willing to do some searching.

Bioshock Infinite  is definitely a very action-driven game, and while the gunplay is rather thrilling, it adds several features that beg the question, “Why bother?” The iconic skylines are definitely one; the game often prompts you to use them as you fight, but the problem becomes 1) There are too few to make it practical and 2) Actually fighting on them is impractical. The game only particularly puts skylines in areas where it seems more effective to just use cover instead. The only area of the game that I found it more advantageous to use the skyline was the very end of the game, which took place in an arena with very little cover and it allowed me to cover the entirety of the area quickly to defend my objective. Otherwise, areas just didn’t contain them or were unnecessary. And actually committing to fighting on the skyline was a nightmare, either you go so fast that you’re completely disoriented, or you slow yourself down to a crawl to line up your shot and become a sitting duck.

Also on the list of lackluster combat mechanics is Elizabeth’s ability to summon things from other dimensions. While it can be useful for quick healing or ammo, its uses beyond that are pretty limited. Trying to summon a Mechanized Patriot typically ended in failure. Assuming it survived for more than a few seconds, it typically had the AI of a lead brick. This would have been a great excuse to introduce some sort of co-op: the player can summon alternate Bookers (other players) to help them accomplish their objectives. As it is, it’s just a grab bag of panic button items.

Finally are the accessories that Booker can find and equip. There aren’t many to be had, and a large amount of them are centered on fighting on the skylines. Forgetting about those, there’s only one or maybe two of each category that are actually worth using. It seems like something that was added as an afterthought to make the game seem more like a classic RPG, but it comes across as half-assed.

The game’s central premise revolves around Elizabeth’s ability to open portals to other dimensions. It’s the reason that Booker is sent to get her, the cause of her quasi-deification, and the central driving force of the plot. The game, however, takes this ability as cart-blanche to just change the story around as it sees fit. Item isn’t there that you want? Let’s just dimension hop to one where it is there! That guy is dead in this dimension? Not in the next one over! It’s a very lazy excuse to make things happen without having any sort of reasoning behind it.

Things happen differently in different dimensions; forget all the work the player did or any semblance of continuity, just hop to another dimension when this one has run its course. It not only allows for lazy story writing, but insists it. It allows writers to make things happen without doing any of the story crafting that would normally be necessary for a coherent narrative. The only way it could be lazier or more gimmicky is if they added time travel, which they then proceed to do. The alternate dimensions are all on different timelines allowing Booker and Elizabeth to go willy-nilly wherever they please with no thought on how it effects what is going on around them. Ultimately, it causes the plot to fall apart and lots of nonsensical things to happen. The story loses its driving force as the main characters just hop from dimension to dimension accomplishing petty tasks.

The dimension hopping is ultimately what sets up the terrible ending, but it’s not the only thing. It starts to go down hill when Booker finally confronts Comstock. What should be a huge and emotional confrontation instead falls flat. Comstock is built up to be this almost mythic figure and controller of masses, but in actuality he is just a whiny old man. The situation quickly devolves into Comstock and Booker shooting at each other in an almost farcical way. Booker brains him, Comstock dies, and that’s the end of their epic confrontation. It carries none of the weight that the confrontation with Andrew Ryan had in Bioshock. Instead it’s just a confusing cap to the last 15 hours of your life.

So what’s next? A thrilling final boss battle? Maybe we’ll finally get to duke it out with Songbird, that awesome battle we’ve been waiting for the whole game? Not quite, instead you get a glorified escort mission. But Songbird’s in it, right? Kinda. You get to control him, by which I mean you point at things and Songbird smacks them around and then proceeds to take a five minute smoke break before coming back for subsequent rounds. It’s a disappointment, it really is, as all you do is gun down waves of mooks and protect a point on the map. That’s the end game.

But then, when all is said and done, Elizabeth has her full powers unleashed, becomes master of the multiverse, and they explain everything. Kinda. Elizabeth gives a long speech about infinite realities and converging timelines and stories repeating (the only thing I took from it was that I was duped into buying the same game twice) and then we find out that Booker is Comstock, because alternate dimensions and stuff can just happen. Elizabeth then proceeds to kill Booker before this news has a chance to sink into the player and the game ends.

But how did Booker become Comstock? Good luck figuring that out because I can’t. Booker supposedly became Comstock after he became a born-again Christian because he felt bad about all the murder and racism and all that jazz. That’s fine, I believe that. But to say that man then turned around and said, “I feel bad about all the racism and murder, better found a religion and city based on racism with the intent of murdering everybody” is such a large jump that it is nigh incomprehensible. There is also no build up to this revelation. We get some scant info (Booker and Comstock both had trouble pasts, Comstock is a lot younger than he should be, etc), but nothing that could be called foreshadowing.

Trying to figure out the timelines and dimensions is a nightmare and nothing really adds up. In the end, it seems like a last minute stunt pulled for shock value and to make people remember it as being really deep. In reality, it touches on no issues very well (besides that racism is bad) and the ending comes off more like a prolonged deus ex machina, trying to piece together things that never fit in the first place.

I enjoyed playing Bioshock Infinite, but only when I didn’t think about it too hard. The combat was fun and I really got a kick out of the Vigors and enemy design. I just couldn’t help but shake my head when Elizabeth would talk or Booker would say gruff things in a gruff voice because he’s a gruff man. Great combat, great visuals, but a story that is at odds with itself on what is actually happening. Bioshock Infinite has all the hallmarks of lazy writing, but there is a solid game at its core. I definitely look forward to more installations in the series, provided they stick with the concept and try and emulate the predecessor more. Evan has been a dedicated gamer since 1995 when he got his first console (a Sega Genesis). A graduate of Shippensburg University, Evan spends most of his time writing about gaming, literature, and nerd culture in general. XBL: Eftsoons PSN: HideousToshi Steam: HideousToshi LoL: Eftsoons
You might also like
2K GamesArticlesFeatures