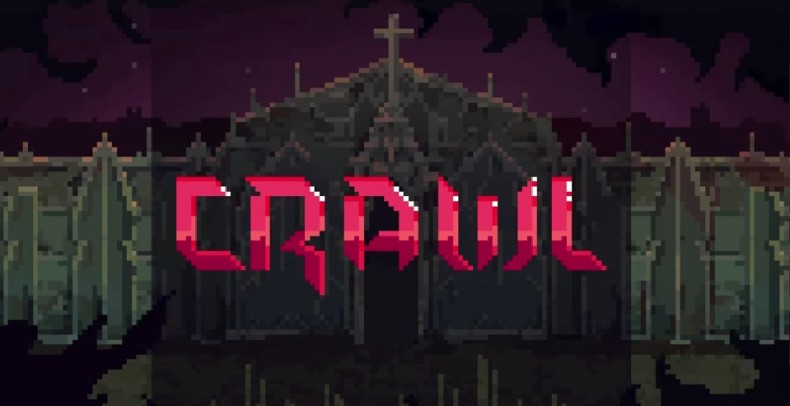 Let’s make friends out of enemies.

A four player local co-op, Crawl is a game constructed of beautiful pixel art that hopes to bring a frantic and fresh take on the dungeon crawler, while still being easily accessible. While each game may only last around 30 minutes, randomly generated dungeons insure a fresh experience every time it’s played. Each round, one player will be selected as the hero while the other three are apparitions who can take control of traps and monsters.

Both heroes and monsters gain experience; while the hero goes the traditional route, (health, damage, and loot) monsters will evolve.

As monsters pound away at the hero, they gain vitae that can be used to evolve the creatures down multiple paths. Slugs, spiders, one eyed flyers, gnomes, and dark knights are just a few of the types available to steal the flesh of your hero friend. Â But remember, as you and your fellow monsters chip away at his armor, make sure to land the killing blow to become the hero that earns the glory.

There are still a lot of questions to be answered, such as: can experience carries between games, how much loot will be available to heroes, and, most importantly, could the Unity basedÂ Crawl make its way to consoles?

With 14 years of programming experience between the two men of Powerhoof, Crawl is in great hands. Make sure to put it on your radar for a 2014.

If you are interested in the two man team behind the game, check out more about the independent Melbourne studio at their blog, facebook page, and even twitter. Even better, check out some of their experiments.

One last great piece of news, the game has been greenlit by the community!

0 people like this
Articles, Features, Slider
crawlGreenlightHead Full of SteamLinuxMacPCpowerhoofSteam

Editor-in-Chief - A graduate from the University of South Carolina, Corey likes to ignore his paying jobs for video games. Playing since the NES, games have played a big role in his life and family. He hopes one day writing and art can be a career rather than a hobby.
You might also like
GreenlightArticlesCorey Kelley

SKARA Gets the Greenlight on Steam