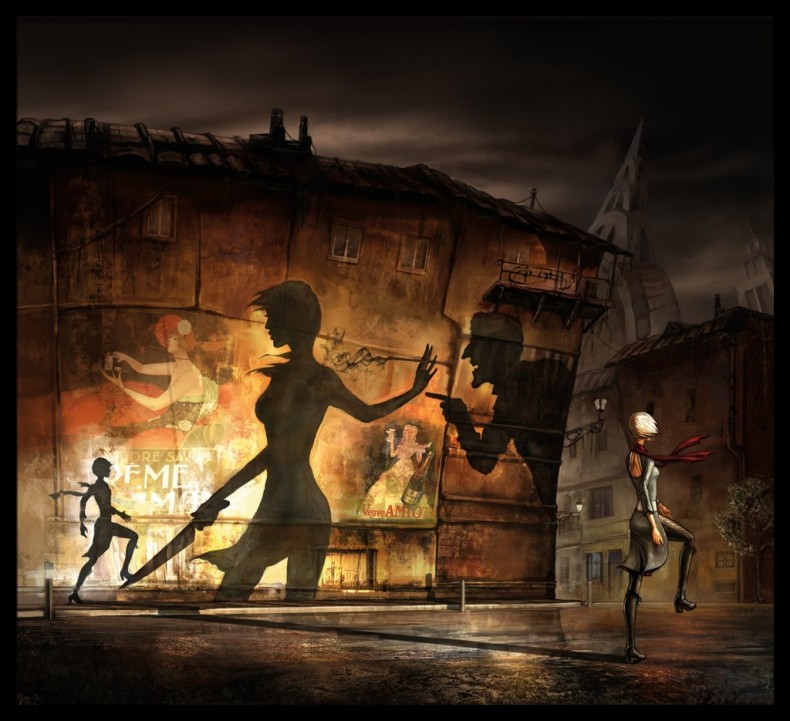 Those of you who keep up with the indie scene may be familiar with Contrast, the charming and intriguing soon-to-be platformer by Compulsion Games. Though many gamers have had their eyes on the title for quite some time, itâ€™s still maintained an air of secrecy. Guillaume Provost and Sam Abbott of Compulsion found some time to sit down and answer a few of our questions.

First off, thank you for taking the time to speak to us! Can you tell us about yourself and the team?

So, weâ€™re a small team of 8 guys and girls, based in Saint Henri in Montreal.Â  I started Compulsion four years ago, and have slowly built up a team to raise money for and work on Contrast (our first original game).Â  Weâ€™ve been working full time for 2 years on Contrast, and weâ€™re looking forward to release!

Contrast is a puzzle platformer in which you explore the life of a little girl, Didi. You play as her imaginary friend, Dawn, and you must use your special abilities to help Didi uncover the truth about her family.

The gameplay features a lot of light manipulation and shadow use. How do these work?

Dawnâ€™s main ability is to approach a wall, in 3D, and shift into the wall and become your shadow.Â  You can then move on the shadows in 2D, and use this to reach areas that you couldnâ€™t get to in the 3D world.Â  You can also move objects and lights in the real world, to change the 2D shadow landscape.Â  You choose when to do this, so the game is about using this ability to switch between the 3D and 2D worlds to solve our puzzles.

What were some of your biggest influences when conceptualizing Contrast?

In terms of video games, we were heavily inspired by the original Portal, in particular by the way that it challenged people to think differently about movement.Â  Limbo and Bioshock also played roles in expanding how we think about gameplay and narrative (the importance of sound and drawing your own conclusions).

In terms of movies/visual style, we were influenced by Dark City, Tim Burtonâ€™s films, and Panâ€™s Labyrinth – creepy, ethereal characters, in a world very close to our own.

Can you tell us about Dawn and Didi? How do you personally feel about the representation of women in games, and is this something youâ€™re consciously trying to change in Contrast?

Didi is a pretty adventurous girl, around 9 or 10 years old, who tends to spend a lot of time alone.Â  You play as her imaginary friend, Dawn, so youâ€™re usually reacting to whatâ€™s going on in Didiâ€™s life.Â

As for women in games, we like the trend towards including more interesting female characters in games.Â  However, we didnâ€™t really set out to do that ourselves â€“ we just wanted to create unique and creative characters.Â  Dawn is unusual because she was conceptualized, designed and animated by women â€“ she has a femininity and style all of her own.

Itâ€™s been said that the playerâ€™s choices will impact Didiâ€™s future, and that light reveals â€œwhat stories remain in shadow.â€ In previous interviews, you werenâ€™t able to talk much about this because things hadnâ€™t quite been finalized. Are you able to speak more about it now, and does this mean there will be an element of player choice?

Yes, we can talk a bit more about it now.Â  This has two aspects â€“ first, in some cases, you literally shine lights on narrative scenes to advance the narrative, and in others the player interacts with the narrative elements themselves.

For the second, we wanted to create a narrative context where the player would feel a part of the story as it moves forward, and in doing so we originally penned multiple endings for the player to experience.

However, during focus testing, we felt that one of the two endings provided a more meaningful and rewarding conclusion to the story line, so we decided to focus on that. Â Although having choice is always an interesting tool in game narration, I think listening to our feedback from players and providing the â€œrightâ€ outcome outweighed it.

The setting is unique and nice to look at. What were the biggest inspirations for the gameâ€™s look?

We really liked the idea of a setting that is like our own but is a little bit more magical â€“ German expressionism, deco, early 20th century Europe all played a part in our unusual architectural style.Â  Vaudeville and film noir combined to create our atmosphere â€“ an era that never really existed, full of intrigue, shadows and illusions.

Whatâ€™s your favorite aspect of the game so far?

Well, itâ€™s my baby, so I like all of it!Â  But I think Iâ€™m most happy with the universe and style that weâ€™ve created â€“ itâ€™s an really interesting setting, and has so much potential to tell great stories.

What do you want gamers to get from playing Contrast?

Weâ€™d like them to come away with a sense that theyâ€™ve just been part of a new adventure â€“ and hopefully, theyâ€™ve had a good time too.

How long will the game be, and when can we anticipate release?

The game runs around 4-5 hours right now, depending on how quickly a player picks up our mechanic.Â  We are still in limbo in relation to release â€“ we had mentioned May previously, but weâ€™ve had some opportunities come up that have influenced our plans (in a good way!).

How would the team handle a zombie outbreak, and do you think youâ€™d all manage to survive?

Well, we hired an intern for the summer, so itâ€™s likely that heâ€™d play the bait while we ran for safety.Â  Weâ€™d give him the office nerf guns though, so that he has at least a shot of survival.

(Itâ€™s not a great shot though.Â  Sorry Jake.Â  It was good knowing you, buddy.Â  Your Dota 2 skills held our team together.Â  Good luck.)

Founder/Consultant Growing up in different countries, Karam has a unique global perspective about gaming. He brings with him that set of eyes and ears that can look at the state of gaming from afar. His gaming loves cover just about every genre, and he is a constant presence on Xbox Live and PSN. Karam is a Systems Administrator by day and lives in Georgia with his wife and three children. By night he transforms into Aye Karamba (Live) or Aaqiloon (PSN), and his virtual aliases live online.
You might also like
compulsion games