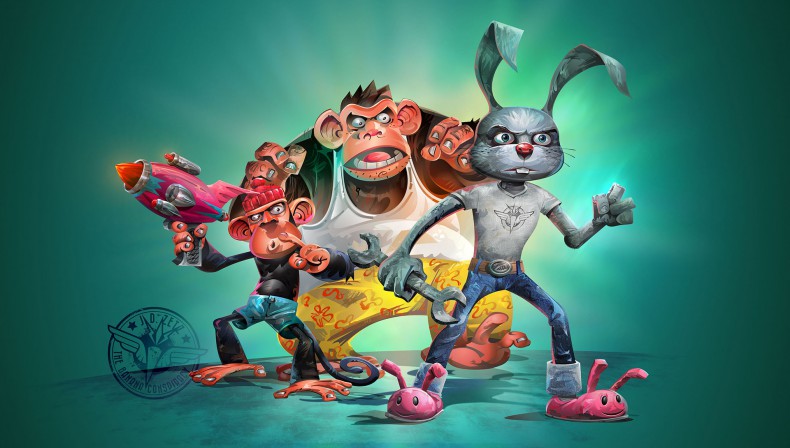 Out of all the indie game developers out there, TripleClaim games – founded in 2012 – is definitely one company to keep an eye on.
Made up of individuals from Sarajevo, Bosnia and Herzegovina, TripleClaim is known for their quirky style of animation and the intuitive nature of their gameplay. Recently, Dejan Omasta, Technical Director for TripleClaim, gave Spawnfirst an interview about what the company is like and where they plan to go in the future.

1. How did your company get started?

TripleClaim Game Collective started as an after work hobby between a couple of friends. At the time we worked for a movie studio on 3D feature film production. We clicked and found that we really love games as a platform to tell stories, entertain, and challenge players with art, music, animation, and programming. This after work hobby slowly started to get more and more serious and we just decided one day to take a leap and quit our jobs, dedicating ourselves to the TripleClaim Game Collective.

2. What challenges has your company faced? How does an indie company get by alongside such big name companies?

Of course there are many challenges for small and starting game studios, that is expected. Every beginning is hard and if you keep moving forward no matter what, you realize that only the first 100 years are hard. After that it really is a piece of cake!
At this point in time it’s much easier for indie game studios than it was when it all started, because we have online communication. With the world and we can exchange ideas, find like minded people, and work on projects outside our usual scope.
This global interconnection gives us so much, and of course as an indie studio we don’t have a censure marketing department that can say to us what can or can’t go, we don’t need to be mainstream. We can be original if we want, and we are free to try things that could get you fired in big name companies. (or so I’ve been told.)

3. What is it that makes your company special and different from all of the other indie developers out there?

I think each truly indie company is entity for itself, it’s a ship on the open sea. It could be a pirate ship or a smuggler.
Each ship is unique. It’s a ship constructed by its crew and they know their ship’s every plank and nail. Each crew member is special. A different individual whose voice is heard in a small Indie studio, not lost in the crowd. Each voice has an influence on ship operations in different ways. Ships can meet, travel together for some time or form a fleet. Anything can happen.

4. What are your inspirations when making games? Is there a certain style you try to embody or any previous games you try to emulate?

We draw our inspiration from everyday things. Watching, listening, learning, and experimenting. We don’t rely much on anything specific, our art and games are our original concepts. Conceived and inspired by everything around us that we value.

5. What do you hope players take away from your games?

We hope to establish a connection with players through our games and give them entertainment value, great art, great gameplay, and something to look forward to. Something to challenge them. We want to share our ideas with players and show them what we think, and how we see things. Getting feedback from them will help us to grow and change in our own way, but together with our players.

6. What kind of feedback do you get from fans?

We often get really awesome comments regarding art, and the look and feel of our games. Of course we value every comment so much, and can discuss each one extensively to try and see the players point of view.

7. What’s next for your company? Any upcoming releases or games still in the works?

We are working on two game projects that will soon be published that are, as of right now, top secret.
After that we will publish our small and fun game, Bananaz In Space. W are also preparing and working on pre production of J.D. Zetz, Banana Conspiracy that will be full 3D game with really fun characters.

8. You have a massive budget and total leeway on your next game: what kind of game would you make?

If we tell you this, then you would not be surprised when that happens.

We have two coffee machines, for a small studio that shows real commitment to work.

10. What is the future of TripleClaim? What are the plans for the company?

We plan to publish games that are in the pipeline, and work on some really fun new ones that are in brainstorming right now. We are also preparing some great 3D apps that are not directly related to gaming, more commercially oriented apps as a part of marketing campaigns. And perhaps in a couple more years we can take a few days vacation time.

A big thanks goes out from everyone here at SpawnFirst, not only for the interview but for the work that you’re putting out. Keep up the great job, TripleClaim.

Evan has been a dedicated gamer since 1995 when he got his first console (a Sega Genesis). A graduate of Shippensburg University, Evan spends most of his time writing about gaming, literature, and nerd culture in general. XBL: Eftsoons PSN: HideousToshi Steam: HideousToshi LoL: Eftsoons
You might also like
indieArticlesFeatures