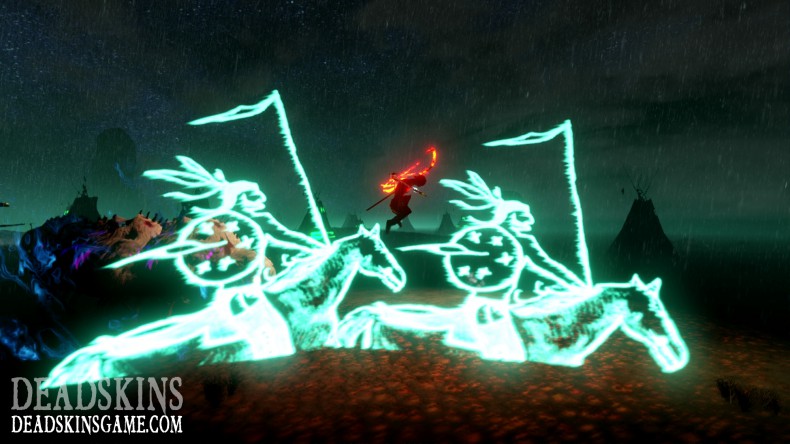 The Kickstarter for Deadskins can be found here.

Deadskins  is a first-person shooter (FPS) featuring a few side-scrolling levels. The concept for Deadskins  was originally thought up by Chris Garnaas, a former make-up artist in the movie industry.

Deadskins  revolves around portals to the spirit world. As you enter the portals and complete the levels, you gain an animal’s spirit power. The goal is to achieve Spirit Warrior Animal Status. A new tattoo will appear on the character, and light up when in use.
Playing as a character whose tribe has just been massacred of mysterious origins, Shamans from multiple tribes have agreed that you are the last hope for Mother Earth. As you begin your adventure, the Deadskins, ancestral spirits, begin to rise and attack the tribes left on earth.

A main feature for Deadskins  is the Zombie Animal mounts. Each mount has a different ability, and these are the “spirit animal” abilities you come to control throughout the game. Buffalo, Eagle, Deer, Bear, Moose, Horse, and Mammoth are so far the abilities available in the game, with plans for a Sabertooth Cat mount in the future. 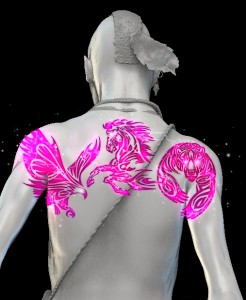 We got in contact with Chris Garnaas for an interview regarding the game.

What’s the coolest thing about Deadskins?

It was intended to be the weapons at first, just like Halo.  But summoning animals from the dead and riding them around as power spirit vehicles is just too awesome!  I can’t wait to play war party deathmatch games.  Or to play “Capture the Scalp” while riding around in a giant redwood forest on zombie horses and buffalos that shoot lasers from their eyes and rockets from their horns! This game has all sorts of animals planned.  Especially the kind found in tar pits!  And all animal vehicles will take damage like the cars in Grand Theft Auto.  As they get hit, their bones begin to shatter more and more, and they become more difficult to control.   Also, the weapons are pretty rad as well.  Imagine launching lightning across the map, turning an enemy into a glowing pincushion with rapid-fire arrows, throwing exploding skulls, or chucking tablesaw tomahawks! And it goes on!

If Deadskins  isn’t looking to reinvent the FPS experience, are you looking to improve what is currently in place?

Well, actually I stated that I don’t want to “reinvent the wheel” of game mechanics.  In which I mean, with Deadskins, I’m not trying to design any groundbreaking mechanics that spins the world of video games on its head.  Not every new game needs to do that.  Old school games are still fun and great mechanics never change.  Just as practically every video game designer before me did, I’m taking my favorite game mechanics and twisting them around.  I’m also crossing genres by adding a side-scrolling aspect to the game along with Myst-like puzzle levels.

This is a fantasy story set in a fictional spirit world.  And since I enjoy a enjoy a good horror story, you might never know when the environment in Deadskins  will turn nightmarish. The experience should be taking center stage and I want the player to feel as if he was transported to another world.  Which is why playing this game inside the Oculus Rift is going to be a lot more intense and immersive than most other current FPS games now.

To make sure the user gets that experience, Deadskins  eliminates the on-screen HUD so that the player feels as if they are being transported out of the “game” and into the world of the dead – the Spirit World.

My friend and I would spend hours playing Time Crisis  and I just loved the shield/cover mechanic.  I thought it would be a great idea to put the HUD information on the Buffalo shield itself.  That way when you are in “cover” mode, you can see your radar, health and ammo indicators without any “HUD clutter”.  In third person gameplay, the shield is placed on the player’s back and easily readable.  Attaching the HUD to the player makes the experience more visceral and you are no longer reminded every second that you are looking at a game.  But the shield is destructible.  It has limited durability and if lost, the HUD is lost.  Health is then monitored with an audio cue of the player’s heartbeat and change of rhythm.

You use Call of Duty, Halo, and Left 4 Dead  as examples of how the combat will work. Which one do you think Deadskins  follows the closest in terms of mechanics?

(If I mentioned Call of Duty, I didn’t mean to.  It’s meant to be Gears of War.)

Deadskins  definitely follows Halo  the closest, more specifically the multiplayer combat. You will see that from its deathmatches and Big Team Battles.  Or you can play the single player campaign to experience the story.  Just like Halo  did, Deadskins  will showcase fantastic vehicles and well-balanced weapons.  It was done so well that I was very much addicted from Halo  1 through 4 (Halo 2  is the best!).  I’m just using a successful model of game play to introduce my story of the Deadskins.

Deadskins  is a lot about America in the 1700s. Are you working to keep the cultural significance of that time, or is this mostly a work of fiction?

The year is really just to signify the timeline of the earth’s age.  Deadskins  is a zombie horror video game and is entirely a work of fiction.  Other than specifying a time period, I’m not drawing parallels to reality or history.  But because the game primarily takes place in the Spirit World, it needs a convincing reality to serve as a foundation.  So I chose to set it in a fictional past of the North American continent when it was mainly inhabited by tribal people.

This in an LSD inspired nightmare.  It’s not factually based on any particular native tribe, mythos or Indian legend. However, it is definitely inspired by them.  The story is like a trip to Wonderland, Oz, or the Matrix.  Once inside, all bets are off.

This story involves Native Americans though because it really centers around Mother Earth.  She is dying from unknown origins and because Native Americans are thought of as the stewards of the land, they make the perfect heroes.

What has been the biggest challenge in designing Deadskins?

Finding a Lead Programmer.  This game was created with the Unreal Development Kit Engine 3, which uses a very specific coding structure unique to that software.  Finding a programmer who will work with it has definitely been the biggest challenge.  The game is practically fully designed.  The mechanics just need to be implemented properly.  I’m creating what code I can, but the game desperately needs a dedicated programmer who gets inspired from this.

Are you worried that people will get upset over your use of zombie Native Americans?

As an artist, I can’t worry myself about what every person thinks or I would never get anything done.  As a socially and culturally conscious human being, I’m not sure how anyone could get more upset over zombie Native Americans (and how they are portrayed in my game) than zombies from any other ethnic group.  No one is immune from turning into a zombie, no matter what race you are.  Deadskins  is a work of fantasy set in a fictional Spirit World.  It’s not real.  And its portrayal of the living people is very respectful to any indigenous tribe.  Deadskins  utilizes all of the things that fascinate me about native cultures and then electrifies it.

In Deadskins, you get to battle alongside the Great Spirit and your ancestors of old—against the threat of human extinction and the death of our planet.  You also get to communicate with animals and share their powers and abilities in order to rescue Mother Earth from a great plague of Eevil.  It’s a story of hope—I don’t think there’s anything cooler than that.

Alana lives in the Great White North, where Polar Bears rule and Maple Syrup is next in line for the throne. During those frigid Canadian winters she is granted more then enough time to explore the lands of Azeroth, play through the next great indie title, or practice hitting fellow gamers with green shells. When she isn't doing any of the above, you can find her practicing the accordion, attempting to juggle, or taking care of the exotic animals and plants she keeps(that are not really meant for the Canadian climate).
You might also like
indieArticlesFeaturesAlana Fearnall