Lock Picking in Games, or Breaking and Entering Realism 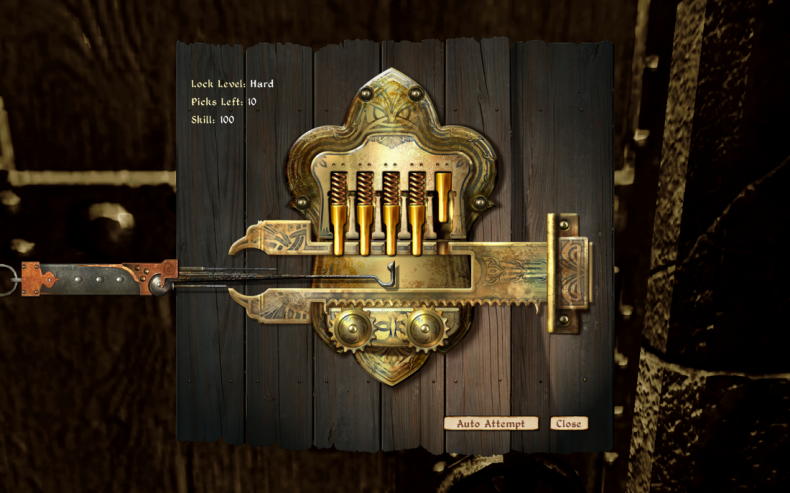 First off, I’d like to clarify that, yes, I do have some experience in picking locks (Lock Sports). No, I do not know everythingÂ there is to know about them. Pin and tumbler locks however, I know a great deal about, and these are the locks that are represented in games when lock picking is a viable skill.

When it comes to the whole subtlety thing in video games, I find that lock picking is sometimes the most…uninteresting part of the game. Some titles have surprised me, like ThiefÂ  (we’ll cover that later), but all in all I find myself looking at the lock picking mini games thinking “this could be better” or “why did they waste money making this”. Examples of great lock picking mini-games are the ones found in Oblivion,Â Thief, or Risen 2.

What I generally look for when I’m playing these mini games is realism and immersion. Now I know that’s a lot to ask from a small segment of a normally much larger game, but I would like to feelÂ like I picked the lock, be it through controller vibration, realistic tension, raking, or single pin picking. Just so you know what I’m talking about I’ll give you a quick rundown.

Tension is paramount in successful lock picking, needing light, medium, or high tension could mean the difference between setting pins, or over setting pins.

Raking is a term used to describe moving a pick across the length of the lock, against the bottom of the pins, hopefully setting as many as possible. This requires a lot of luck and some skill.

Single pin picking, which is primarily shown in video games, is one of the most advanced methods of picking. It requires a great deal of concentration, knowledge, skill, and sensitivity.

One of the best examples of lock picking in video games, in my opinion, is from Risen 2 :

Raking, tension, and single pin picking are all incorporated, although you do get a cut away view of the lock, removing the challenge of picking blind (that is, picking without seeing the pins).Â A cut away view does give its own educational purpose by teaching the intricacies of tumbler locks and how moving through the lock randomly will set, over set, and unset pins.

Assassin’s Creed IIIÂ set me on a small amount of a tangent. I’ve heard that people enjoyed the lock picking in the game immensely, but I’d have to slap them with a fish if they said it to my face. Why go through the trouble of finding the tension point and the set (I assume binding) pin, only to break the damnable thing open with brute force a second later?!

Make it look like you know what you’re doing and they’re convinced.

Now that my little rage out has concluded, onward to the great lock picking mini game in Thief.Â  Unfortunately, you only get the real feel of manipulating those pins when you use focus mode. Otherwise you are spinning the pick in circles until you find the sweet spot. Believe it or not, that’s not how it works with pin and tumblers. It led me down to an extent, but I found myself racing to see how fast I could pick a lock, which made me realize that the game was simple when not in focus mode, but entertaining enough that I still felt I was accomplishing something.

Isn’t that the point? A feeling of accomplishment? Not just a small game that is tedious and in the way, but an actual challenge that makes it feel like opening that special something was worth it, that you worked for it and deserved passage to what was on the other side? Yes, yes that is EXACTLY the point. Now why can’t we make more mini games like that?

Some mini games that involve a lock to bypass are a lot more futuristic or creative, games like BioshockÂ  (where you align the tubes with the glowy liquid and sterf) or Mass Effect Â where you need to hack a door or computer in order to pass. Not conventional lock picking, but very entertaining and challenging, and as I’ve said before, that’s exactly the point. 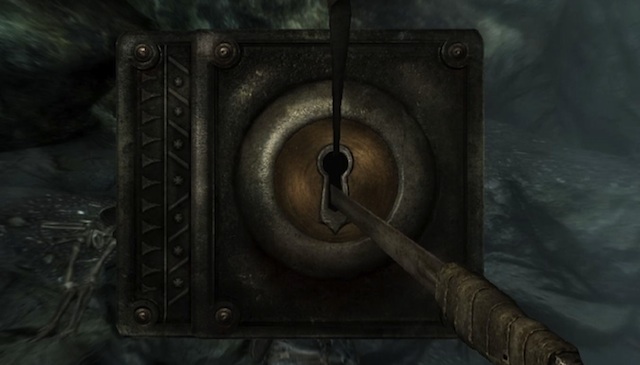 There are many games where breaking and entering is barred with a skill roll or mini game challenge, and most fall below the bar. The games I mentioned are the titles that exceeded expectations.Â If I were to list the games that have failed me I’m sure this feature would be A LOT longer (maybe I’ll write that article later and call it “Lock Picking in Games: Barbarian Magic”).

In conclusion, I would like to state what inspired me to rant in the first place: the lack of immersion in mini games, especially lock picking. I know that most funding is spent on programming, graphics cores, writing, producing, advertising, and merchandise. Is it too much to ask for a mini game that makes me feel like I am in a character’s shoes? Like trying to pick a lock in the nick of time to evade some guards, or escape consequence forÂ  some kind of nefarious crime I had committed? Moments like hacking into a robot A.I. in TitanfallÂ  to gain its assistance (click and wait…how exciting) or trying to hack into a door to access a room before someone dies or…something…I guess… YOU GET MY DRIFT. There is little excitement, and I believe that something as simple as adding a small amount of realistic gameplay to something like picking a lock can change the entire feeling of a game.

Staff Writer Luke "FoxJester" Cobham can be seen in the wild helping other folk with their various plumbing problems and disasters. Commonly you will see him wade into a vast sh*t storm in order to save the others drowning within. Less frequently seen however, is when the majestic FoxJester is hidden in his man cave playing numerous video games, or beating people senseless with large bladed weaponry, in which he has been training with since 7 years of age. Video game Journalism however, seems to be this creatures true calling, throwing news, opinion pieces, and reviews at Spawn First as if he were a crazy poop throwing Jabberwocky. Oh, and he's Canadian.
You might also like
OblivionArticlesOpinion