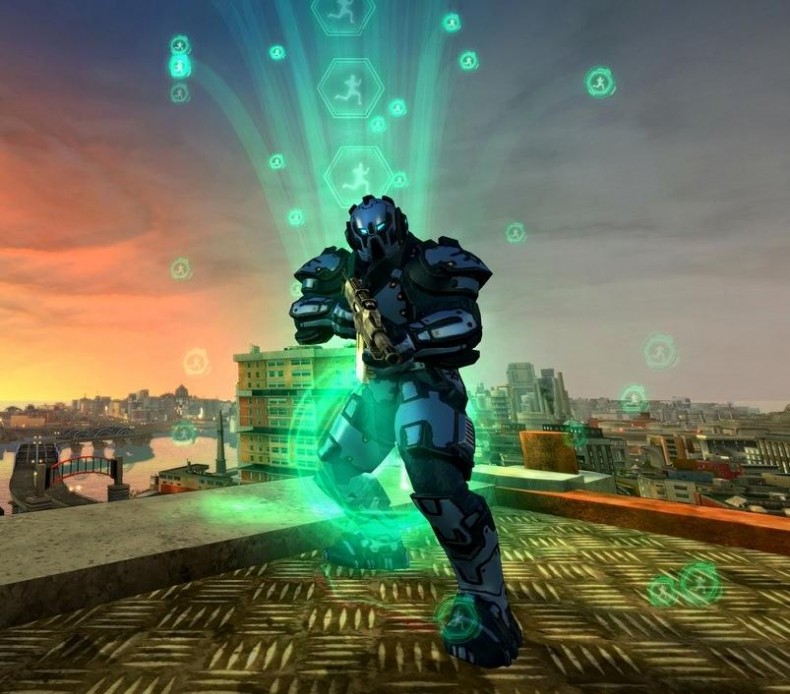 A few weeks ago, I re-downloaded my digital copy of InFamous with one specific, platinum-colored goal in mind.Â  With 85% of the trophies already collected, I decided to spend my weekend tearing through the entire game one last time to pick up those last few achievements.Â  The process was, to say it shortly, very arduous.Â  Hunting down every last blast shard nearly had me in tears, especially after I realized I had accidentally crossed off one of the shards I didnâ€™t collect, which meant I had to meticulously re-scour the entire island until I was able to find the damn thing.

When I unlocked the Casey Jones trophy (you get it for killing several enemies while riding on a train), which happened to be the last I was missing, I let out a sigh of relief.Â  The platinum trophy notification popped up on my screen, and the virtual goodie was added to my collection.Â  It looked great next to the shiny Uncharted 3 platinum, and there was a surge of self-satisfaction.

So what did I do next?Â  Well, after spending close to twelve hours on the game over a two-day weekend, I promptly exited InFamous and deleted it off my system forever.Â  I was sick of the sight of Cole McGrath, of Empire City, of reapers and dustmen and Kessler.Â  And if I never see another blast shard again, itâ€™ll be much too soon.

Get the HELL away from me with that!

InFamous, however, is one of the greatest titles I have ever played.Â  After receiving a free copy from Sonyâ€™s Welcome Back program of 2011 (which took place after the infamous PSN outage), I was instantly enthralled with Coleâ€™s superhuman struggle. Â The game actually made me feel like a super-powered freak, and the storyâ€™s twist stuck with me for weeks.Â  In fact, I was so absorbed in the gameâ€™s universe and lore that I bought InFamous 2 the day it released for digital download.

I adored InFamous like a lover.Â  Sure, I had never fallen asleep with it in my arms, but thatâ€™s only because I didnâ€™t own a physical copy.Â  Like a jealous ex-boyfriend that wants to win back your girl, though, the platinum trophy split up our unwavering love.Â  A grinding push to secure every last trophy completely destroyed my enjoyment of the game and, to some degree, I regret ever admiring that 100% completion.

While achievements still play a big role in my gaming experience, I wouldnâ€™t peg myself as a dedicated trophy hunter.Â  InFamousâ€™s platinum was just the second of its kind in my collection (behind Uncharted 3), and right now I have just over a thousand of bronze, silver, and gold combined.Â  My PlayStation Network friendâ€™s list is bare (my list of real friends is even slimmer), which means I have virtually nobody to brag to.Â  For all the effort I put into scooping up trophies, I have no tangible item or to show for it or prowess to hold over others.Â  I constantly ask myself exactly what the hell Iâ€™m trying to accomplish by staying up until three in the morning to find collectibles or beat a ludicrously hard difficulty.

Spec Ops: The Line, which was featured in Marchâ€™s PlayStation Plus update, held the honor of hosting my third platinum.Â  Once again, I found myself meticulously slogging through a game in an attempt to crack off a few achievements, even when it was a game I had enjoyed initially.Â  Maybe I was just trying to cope with my lack of physical awards and medals in real life.Â  Or perhaps there is a subconscious feeling of completion for reaching 100% trophy collection.Â  Whatever the case, Spec Ops: The Line met the same fate as InFamous.Â  Iâ€™m sure it feels used and cheated, as it was a great game that I took advantage of for a platinum.Â  Iâ€™m sorry, Spec Ops, but I hope we can still be friends.

If youâ€™re wondering if Iâ€™ve learned my lesson yet, the answer is, quite simply, â€œno.â€Â  Another game I feel very passionately about, BioShock Infinite, is in my sights for a fourth platinum trophy.Â  I had no problem with 1999 mode on my second playthrough, meaning there are just a few oddball trophies left to collect.Â  Hereâ€™s the catch, though: Iâ€™m going to have to go through the entire game to collect these.Â  While I wonâ€™t object to seeing this amazing game for a third timeâ€¦ well, I just hope I donâ€™t decide to cram it all into a single weekend again.

Only time will tell whether or not my obsessive hunt for trophies will kill the ecstasy I have over video gaming.Â  Sometimes I ache to go back to an age where simply beating a game was enough of an achievement.Â  I suppose I could easily ignore these tacked on rewards, but being commended for hitting 69 enemies in the testicles, or delivering presents to a girl during a zombie apocalypse, or surviving several minutes with the cops hot on my tail â€“ these situations create a meta-game to the standard experience.Â  Hunting for trophies can feel like a full time job, for sure.Â  But it can also feel like a sweet (albeit extremely trivial) accomplishment.Â  Hereâ€™s a depressing thought to leave you with, though; isnâ€™t every single life accomplishment, in the end, rather trivial?

Former Contributor Nolan Alber is a college student from North Dakota. He enjoys rescuing puppies from burning buildings and beating up criminals on the streets, and often lies about his interests to make himself look better. Nolan is an avid gamer on PlayStation 3 and PC. He impulse-buys more video games than he can actually play, and is a fan of shooters and fighting games (even though heâ€™s terrible at the latter).
You might also like
CrackdownArticlesOpinion