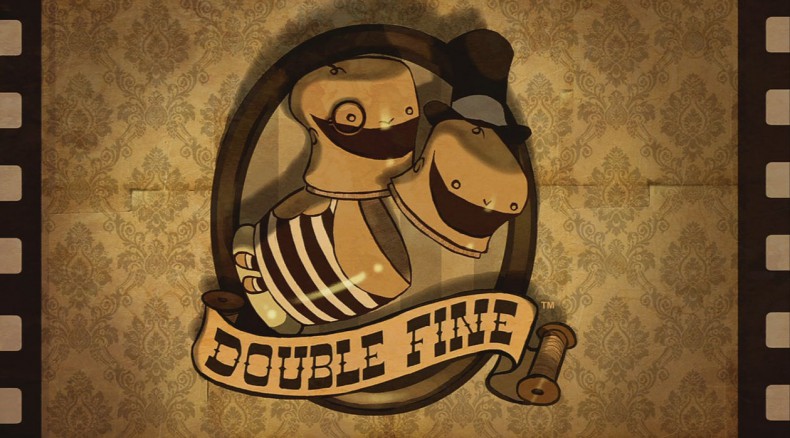 For the longest time you could do no wrong. In my eyes, Double Fine was the pinnacle of what I saw being good about video games. The scripts and jokes were flawless, the characters lovable, the gameplay intuitive and challenging. But it’s been a long time since I was absolutely floored by a Double Fine game. I think Psychonauts  was the last time I ever walked away from a game absolutely flabbergasted at what could be accomplished in this medium. The time since Psychonauts  has not been so kind. There have been plenty of Double Fine releases that I have enjoyed, but none that approach what made the old ones great. The Cave  was certainly funny and had great style, but the puzzles were easy and the game was repetitive. Costume Quest  was similarly well written and a lot of fun, but the battle system never evolved and the “puzzles” seemed shoehorned in and equally simple. I don’t know if these simplified puzzles are pandering to mainstream audiences or if it’s just a company getting complacent, but Double Fine used to be known for its challenging and quirky puzzles and offbeat humor, not one or the other.

I’m still conflicted about Broken Age. I guess I just wanted more. To me, Broken Age  just seems like a repackaging of nostalgia (although, to think I would get anything different from Kickstarter is ridiculous in hindsight). Broken Age  was a glorious revelation, that fans no longer needed to be constrained by the whims of Triple-A game executives. To not only achieve the funding goal, but to surpass it by so much and so quickly was a testament to how beloved Double Fine is and the quality of work they are known to put out. The end result was certainly a thoughtfully crafted point-and-click game with an all-star voice cast and compelling soundtrack, but those elements seemed to fade and become superficial as the game wore on.

I understand that the original goal of the project was to emulate the classic adventure games that were the foundation of Double Fine, but that’s all it did. It was a fun-filled romp down nostalgia lane, but at the end of it I was left scratching my head and wondering how the gaming industry, or even just Double Fine, was any different as a result of the game. I guess I was thinking that the game would be a point-and-click adventure with something more. Some gimmick or innovative story idea. I’m honestly not sure why one of those things didn’t exist. Double Fine is known for those kind of innovations and you aren’t exactly strapped for cash.

I’m not raging at Double Fine; I still love them. It will take more than a few good games with slight missteps to shake the zealous fervor of my fandom. If anything I’m just kind of disappointed. What I want is a Psychonauts 2  (not literally, more like a spiritual successor). I want a game that’s going to include challenging gameplay, intriguing puzzles, inspired level design, a well-crafted story with the classic Double Fine humor, and a cast of lovable characters to bring it all to life. Looking at Double Fine’s past, I don’t think this is too much to ask.

Nostalgia is all well and good, but if that’s what a company has become reliant on then it is a shadow of its former self. New ideas need to be produced and barriers need to be pushed. To me, it seems like Double Fine is currently just treading the same water over and over again because it’s what they know and people are willing to throw money at it. I just want to say to Double Fine: I am no longer willing to just throw money at it. I want more, and I know that you’re the company that can give it to me. I believe in you as a company, as game designers, as people. I’m hoping your next project after Act 2 of Broken Age  is released will be something memorable, something that’s a return to the Double Fine I know.

Evan has been a dedicated gamer since 1995 when he got his first console (a Sega Genesis). A graduate of Shippensburg University, Evan spends most of his time writing about gaming, literature, and nerd culture in general. XBL: Eftsoons PSN: HideousToshi Steam: HideousToshi LoL: Eftsoons
You might also like
Broken Age