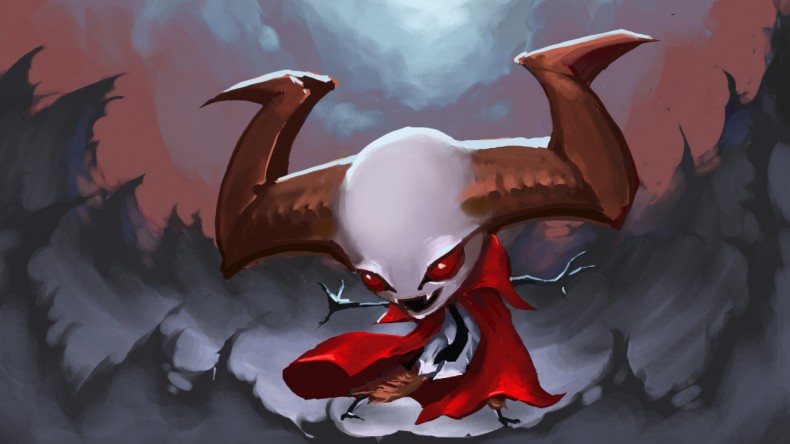 Indie games are a growing genre these days. In an industry that’s been dominated by blockbuster games created by well-known developers, it’s a refreshing change of pace to see smaller devs with big ideas get some of the spotlight. Recently, I had the distinct pleasure of interviewing one of these indie heroes, Tyler Hunter, about his upcoming game, Rack N Ruin.

Can you give us a brief synopsis of the plot and what the player can expect to experience as Rack?

Rack N Ruin features a story centering around a little demon wizard named, Rack. He’s this interdimensional invader who hops around the galaxy from planet to planet bringing about their demise and eventual total destruction. Heâ€™s the servant of a dark lord named Ruin, who seeks to control the universe. Â While Rack is pretty good at what he does, he fails to grasp the concept of conquest vs turning the planet into a smoldering asteroid belt. Fed up with Rack’s constant string of failures, Ruin gives Rack one last shot before he is cast into the void. That last chance is the where the game takes place.

So the experience is a top down action adventure game where you run around an innocent world wreaking havoc. The world is fairly open to explore, filled with secrets, puzzles, and lots of good guys to slaughter. There will be a progressive story, and a whole slew of NPCs who will interact with Rack as he roams across the world. Along the way there will be a series of large dungeon levels that will each have a unique theme and locale. These will be the set piece experiences which will feature new puzzle mechanics, abilities, epic boss encounters, and key story moments.

Rack N Ruin is a top down adventure game, which in a way, reminds us a bit of Zelda, but inversed (playing as the antagonist instead of the protagonist). Do you think this is a fair assessment, and if so, how does it vary from the Zelda games and how is it similar?

Itâ€™s similar in structure to a Zelda game. You have a world map you can explore that is filled with all the usually goodies Â towns, caves, secrets, deserts, etc. The experience is progressive, so each inch of the game is designed, thereâ€™s no random generation.

Mechanically its plays a bit differently. Rack is a wizard, his magical arsenal can make quick handy work of most enemies from a distance. So the combat is much more hectic and arcade like in feeling. Enemies will be much more aggressive and will come in substantial numbers. Nowadays we can really put a lot of enemies, bullets, and objects on the screen so there is a play style thatâ€™s not typically found in Zelda games. Itâ€™s more Binding of Isaac mechanically speaking, but in larger rooms with a variance in enemy numbers/sizes.

The tone of the game is quite different, itâ€™s got a more Disgaea vibe when it comes to the comedy and writing. The game’s story is being viewed from the point a slightly mad arsonist demon. This will give the whole experience a unique and zany vibe.

How did you come up with the idea of Rack N Ruin? What is the inspiration for Rack and the circumstances in Rack N Ruin?

I’m actually in the process of writing a dev blog about Rack’s design and influence. Thereâ€™s an archetypal villain type that fits Rack’s description. Heâ€™s equal parts Kefka, the Joker, Black Mage, Invader Zim, and Darkness. I’ve always liked villains who are simply bad because itâ€™s fun, and have no end goal in mind. Because that would mean an end to what they love doing, wreaking havoc and creating chaos. So Rack just likes to continue destroying, and amongst the endless expanse of the universe, he sees no end in sight.

I love top down action adventure games, and I wanted to make one that featured a wizard as opposed to a sword wielding warrior. That seemed to fit the whole collect artifacts, solve puzzles trappings of the genre. I also didn’t want to make it your typical run of the mill save the world kind of quest. So I hatched a plan to make a likeable villain who is caught in a dilemma. Thus Rack was born on a sketch pad.

Was it difficult conceiving a game where you play a character that is set on malice and committing wicked acts (however comical), instead of being the hero?

I think its actually a bit easier. Games often use combat and killing as a primary mechanic. Â Its often silly how we have these perceived heroes who run around the world and commit what is basically genocide of the “other side”, loots everything they can find, and in the end retires to some kingship. Seems more like a bad guy. So the story is usually: here are all these bad guys, kill them because youâ€™re good, and save the day. But when youâ€™re a villain and lack a moral code, the killing is just part of the process. Then you get to explore the individual motivations of a character that aren’t typical. It gives the story so many new angles it can go in, that coming up with ideas is fairly simple.

What do you think makes Rack N Ruin stand out from other indie games? Why should people play this game instead of other similar games in this genre?

There are actually very few games like Rack N Ruin. And even less so that feature such a high level of visual hand-crafted polish. Most of the top down games that are being made are roguelikes. I actually set out to make Rack N Ruin because there really isn’t a HD 2D top down game that is a full featured adventure. I love the Binding of Isaac, but that’s a rogue like and not a progressive story driven experience. That whole feeling of exploring a large world is really the aim of RNR, and all the strange things you might find along the way.

When Â I started Rack N Ruin, I felt that there just weren’t enough hand painted high resolution games. Â There are a few, and most notably are the games from the company Vanillaware who are a large inspiration for the visual style in Rack Â N Ruin. So visually Rack N Ruin is very unique.

The game is also unique in that in centralizes around a unique character that has his own story and personality with in the game. The tone and ideas of the game’s story are really a thing unto themselves.

One of the biggest hurdles Indie developers have is getting the word out about their game. The Indie market, since its rise in popularity, has become highly saturated. What steps have you taken to expose your game to the masses?

This is totally true, and even more so when you consider the fact that we have a very small team on an ambitious project. Itâ€™s almost impossible to find the time to post on forums, update the blog, chat on Twitter, Tumblr, Facebook, Reddit and so forth. On top of that, emailing press, making trailers, a website, screenshots, and on and on and on. Itâ€™s almost a full time job in and of itself. So we have been working with a PR representative from BeefJack to help promote the game as the Greenlight campaign goes up. Along the way we are going to be running promotions, and shipping builds to Let’s Play people so everyone can see the game in action. As we get closer to release, we have some cool ideas that we think will get everyone excited about the game.

What are some benefits you see about being an indie developer?

Creative freedom is huge, as well as being free from the design by committee environment that dominates the large development studio. That has a lot do with why thematically Rack N Ruin is such a unique game. Â Itâ€™s the raw vision of one artist.

What were some obstacles or conflicts that arose that your team had to overcome?

I think with an ambitious project like this, the biggest obstacle is finishing it, and making sure that its a good game when itâ€™s done. Thatâ€™s a massive obstacle, itâ€™s like trying to make something that would usually take 20 people a year with a whole lot more money, but instead with 3 in 2 years on shoe string budget.

Thanks again to Tyler Hunter, for taking time out from his already stacked schedule and answering our questions! For more Rack N Ruin news, make sure to check out the website, follow Tyler on Twitter, and like the Facebook Page. Rack N Ruin is projected to be released March 2014.

SpawnCast Co-Host/Creative Co-Director Brian is member of the University of Mary Washingtonâ€™s class of 2012 and graduated with a BS in Computer Science. He has been gaming since the first day he held an original GameBoy in his hands and hasnâ€™t stopped since. He now plays mostly shooters and RPGs on his Xbox 360 but will occasionally work in some sports or fighting games when heâ€™s in the mood. He is also a huge fan of playing marathon sessions of Legend of Zelda when the opportunity arises.
You might also like
indieArticlesInterviews