Saints Row IV and the Art of Stealing Thunder 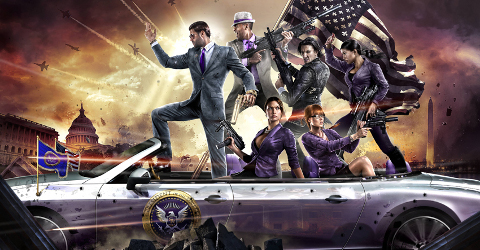 And they should, because the games release less than a month apart.

So, let the battle of the fanboys ensue!Â  Saints Row IV (which releases on August 20 of this year) will no doubt be looking to swipe a few sales from GTA loyalists and casual gamers alike, and thereâ€™s a good chance they will.Â  Volitionâ€™s combination of borderline-psychopathic action and tongue-in-cheek humor turned out to be a recipe for an insanely good time.Â  And it doesnâ€™t hurt that they give you the ability to configure your own protagonist with nearly limitless options.Â  Unless GTA Vâ€™s already-released main character models change drastically in the next few months, you probably wonâ€™t be playing as an overweight, huge-breasted purple zombie lady when it launches on the 17th.

Volition rounded up a whole truckload of hype with a new trailer last week, as well.Â  In typical Saints Row fashion the trailer advertises super powers, UFOs, presidency, and so much more wrapped up in ADD-friendly clips of about half a second each.Â  In response, the internet had this to say:

Well I imagine it was something like that.Â  Thatâ€™s what the internet is like these days, isnâ€™t it?

Meanwhile, Rockstar managed to beat a pulse into the dying GTA V hype by releasingâ€”drumroll, pleaseâ€”screenshots.Â  While the screenshots didnâ€™t show any gameplay or new mechanics and were generally pretty insignificant overall, they did look beautiful.Â  Especially the picture of a delightful San Andreas sunriseâ€”itâ€™s so lifelike Iâ€™m tempted to plaster it over my bedroom window to wake up to every morning.Â  Wait, maybe itâ€™s a sunset.Â  Or solar flaring striking the earth. Iâ€™m not good with weather.

Itâ€™s probably a safe bet that both games will be ludicrously fun and consume more of my time than my actual life does.Â  With a monthâ€™s head start, itâ€™ll be interesting to see how Saints Rowâ€™s sales stack up to the legendary Grand Theft Auto series. Â With hardly any coverage thus far on either game, weâ€™ll just have to wait patiently for more kickass, adrenaline-pumping, curiosity arousing trailers andâ€”erâ€”screenshots.Â  So for the next few months I strongly encourage you to get out past titles of both series, strap on your jetpacks, load up your rifles, and drive over bystanders on the sidewalkâ€”because weâ€™re in for a rambunctious and belligerent fall.*

Former Contributor Nolan Alber is a college student from North Dakota. He enjoys rescuing puppies from burning buildings and beating up criminals on the streets, and often lies about his interests to make himself look better. Nolan is an avid gamer on PlayStation 3 and PC. He impulse-buys more video games than he can actually play, and is a fan of shooters and fighting games (even though heâ€™s terrible at the latter).
You might also like
Grand Theft Auto 5ArticlesOpinionNolan Alber