Sonic the Hedgehog On Vita Part Two: What I Want 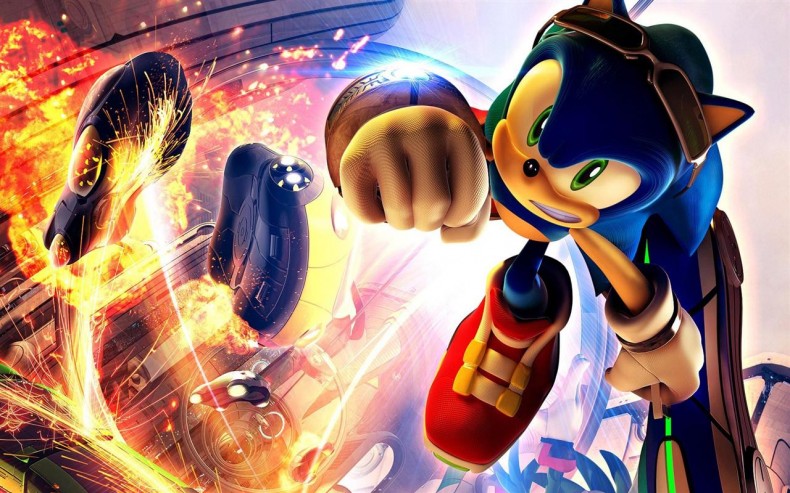 The three-game exclusivity deal between Sega and Nintendo renders the chances of a new Sonic the Hedgehog title coming to the Vita in the near future extremely unlikely. However, because I’m such a tragic fan of Sega’s mascot, I can’t help but ponder what form an installment on my go-to console of choice might take were it to ever happen. I already detailed some of the past Sonic games I’d like to see ported over (because that’s the best chance we have of seeing Sonic on our OLED screens before 2015), but what if Sonic wasn’t currently confined to Nintendo systems? What might Sega have up its sleeve? Time for some good old fashioned speculation! Hurray! Sonic Rivals and Sonic Rivals 2 – a pair of PSP exclusives – represent yet another misstep on the part of Sega concerning Sonic. On one hand they’re refreshingly old school, as there’s no free-roaming adventure nonsense and the action takes place entirely on a 2D plane; but then there’s the fact that the core gameplay mechanic – racing to the end of the stage not just against the clock, but against an opponent as well – is shoehorned into each and every facet of the game, even (or especially) where it shouldn’t. For example, the boss encounters see you manically attempting to cause enough damage to defeat the boss before your rival can do the same, which just isn’t fun; and the one on one battles between your character of choice and your rival perform the less than admirable miracle of transporting the player to a nightmarish alternate reality in which Super Smash Bros. was coded by a team of cack-handed, computer illiterate monkeys. And nobody wants to live in a place like that. Also, the physics are a bit off; the amount of forward momentum you feel like you should have is drastically out of sync with how much you actually have, especially when attempting to jump forward. It just doesn’t feel right.

However, the core idea behind Sonic Rivals is rock solid, putting a neat twist on the Sonic school of platforming and also bearing the distinction of being one of the few Sonic the Hedgehog games in which multiplayer has been implemented successfully. So by discarding the less desirable sections, focusing on the racing aspect and tweaking the physics, Sonic Rivals 3 could be a cool little Vita exclusive. Zen Studios and Sonic Spinball would surely be a match made in Heaven.

After Sonic initially bounced his way through the Spring Yard Zone in Sonic the Hedgehog in 1991, it took less than two and a half years for Sega to do the obvious thing and release a game in which Sonic moved exclusively around levels set out like gargantuan pinball machines. With Sonic the Hedgehog: Spinball, Sega served up a brilliant stopgap between Sonic 2 and Sonic 3, taking a fan favourite aspect of the Sonic mythos and crafting a full game around it.

If an announcement regarding Sonic Spinball 2 were to miraculously materialise, there’s only one studio I’d want on development duties: Zen Studios. Those guys know pinball inside and out, having spent years meticulously honing their craft; they’re also experienced in melding pinball together with a diverse and eclectic selection of existing franchises, such as Star Wars, Plants vs. Zombies and various Marvel characters and properties. So if there’s one developer more than capable of revitalising Sonic Spinball by lavishing it with visual flare and little nods to past events in the Sonic chronology while nailing the pinball physics, it’s Zen Studios.Â Sonic Adventure 3 would benefit hugely from using the modern era segments of Sonic Generations as a template.

Sonic Adventure and Sonic Adventure 2 are certainly two of the most polarising Sonic titles. Their introduction of untraditional gameplay elements like shooting, treasure hunting and – ugh! – fishing and the former’s free-roaming questy bits are aspects that have been met with almost unanimous disdain; on the flipside, the fast-paced Sonic – and in Adventure 2, Shadow – segments along with the idea of interweaving narratives culminating in an epic finale have done more to win players over.

Should Sonic Adventure 3 ever see the light of day, I’d like to see it take those aforementioned latter points into consideration, perhaps starring the trinity of Sonic, Shadow and Silver – a la 2006’s Sonic the Hedgehog – while drawing upon the gameplay from the daytime sections of Sonic Unleashed and the modern era segments of Sonic Generations in terms of gameplay; levels that dynamically and fluidly transition between edge of your seat super-fast 3D sections and more skill-focused 2D platforming. There’s no reason why each character can’t play distinctly either. All three possess unique abilities; it’s merely a case of finding ways of implementing them without affecting that all important flow and momentum. Sonic Generations proved that a Sonic game can work even when it isn’t confined to a 2D plane and it’s high time Sega learned to capitalise on and build upon that game’s success. This scene actually makes me pine for Sonic 3 & Knuckles HD Remaster. If only!

Another way for Sega to use the stellar work they did on Sonic Generations would be to go all out with the all but perfect classic Sonic sections and develop a game consisting solely of those. I’m talking full on old school Sonic in 2D, only with gorgeously rendered levels that take full advantage of whatever hardware – so Vita, hopefully – they’re running on. If Sega were to start work on Sonic 5, adhere to those simple guidelines and resist the urge to experiment with new mechanics – which would inevitably balls everything up – they’d have a game on their hands that would surely be everything Sonic the Hedgehog 4 should have been and so much more.

And that’s that! Whether any of my suggestions for either ports of past Sonic games or all new installments will ever come to fruition and put in an appearance on the Vita is anyone’s guess at this point. Seeing as the Wii U is current massively under-performing, youÂ can be sure that once their deal with Nintendo expires, Sega will be eager to get exposure for their spiky blue mascot back on the up and so a debut on the PlayStation 4 and Xbox One is all but inevitable. I just hope the Vita isn’t left out in the cold; it could inarguably benefit from more exposure itself and if Sega makes a show of getting their most high profile IP onto the handheld, with any luck other third party developers and publishers will follow suit.

Former Staff Writer Mark hails from Cardiff in the UK and his interests include videogames (obviously), Marvel Comics and playing Pathfinder with his wife. Yeah, his wife. You WISH your wife was that much of a nerd. He also has an unhealthy obsession with Sonic the Hedgehog, which has resulted in him listening to the Sonic Generations soundtrack on a loop since he bought it. He no longer has any neighbours.
You might also like
ArticlesFeaturesMark Reece