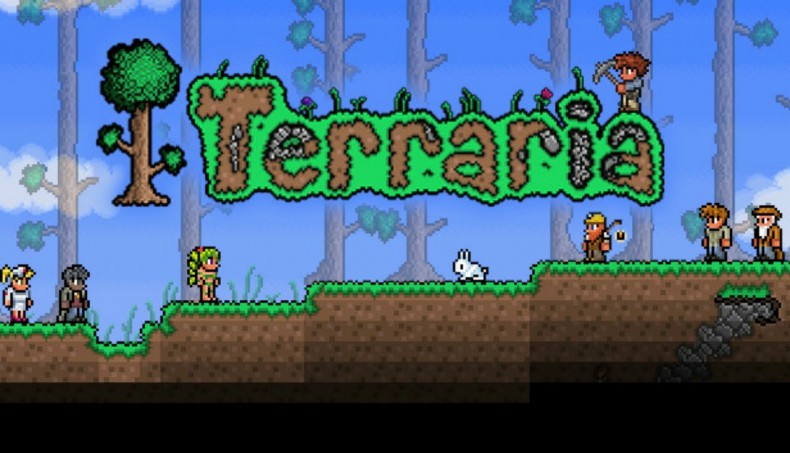 Indie games have been gaining mass amounts of popularity over the past couple of years. It seems everyone who considers gaming a hobby has at least tried an indie title. Some of my personal favorite titles include the Mutant Blobs series, Thomas Was Alone, and Hotline Miami.

So, for this weeks SpawnStaff picks, I decided to ask the staff what their all time favorite indie title was: The open world crafting genre is fairly new, with two major pioneers; Minecraft and Terraria. As much as I enjoyed Minecraft, I doubt any game could come close to beating Terraria‘s creativity and ability to get everything just right. Terraria added in NPC’s, customizable characters, different tiers or armor, dungeons, end game content, and most importantly: bosses. If you haven’t spent all of the night phase killing the ‘Eye of Chutulu’ just to see how many times you can do it, you are doing something wrong.

If Terraria has one problem it’s that the game can’t be enjoyed on your own. Although its a great multiplayer experience, most people are unwilling to pick up the game as they “Already have Minecraft“. Either way, it’s the type of game you will log at least 100 hours into. For only 10 dollars on Steam, that seems like a good deal to me. Project Zomboid is the post-apoclayptic zombie survival-horror game you’ve always wanted, but more than likely not aware that it exists. While it is still an early-access indie title, it plays very much like a finished product. Taking a Diablo-like top-down perspective, you customize a character, with traits, and are dropped into one of two maps. You can do sandbox or survival modes at varying difficulties and with sandbox you are able to customize what type of zombies are in the world, what traits they have and even when water and electricity go out. What happens next is up to you.

You can travel the entire map, but there is no “main map” that lets you know where you are at. You have to remember each location and where you are going. You are limited sight wise to what your character can see, so you know the area around you, but you can’t see zombies or inside buildings unless you are looking in that direction. Every building can be entered, looted and made into a safe house. You can board it up, build wooden extensions and start a farm. You have to make sure you keep drinking and eating while getting enough sleep, and avoid getting sick while treating other injuries properly. In my opinion, it’s the best zombie apocalypse simulator and not to be missed for $14.99 on Steam. It’s available for PC, Mac and Linux. One of the best things about the indie gaming industry is the freedom from the rigid tropes of structure and genre that holds so many of the larger gaming companies hostage. This also tends to mean that games that get made are closer to passion projects rather than just a job given to a bunch of bored developers who’d rather make anything else. And that love shines through, in every game from Transistor to my pick for this week’s article, Drinkbox Studios metroidvania (or should that be mexicovania, am I right guys?) game Guacamelee.

Gucamelee just oozes joy and love and attention to detail, from the brightly colored world to the catchy and thoroughly enjoyable in it’s own right soundtrack, to the collection of colorful characters which populate it’s hub towns and boss stages to the knowing humor that adds another level of enjoyment to the already rather lovely backgrounds (Loco Lobo brand tequila anyone?). Beneath all of the great game design and delightful aesthetic there’s a solid foundation of gameplay to back it all up. Guacamelee is a 2D brawler at heart, its tight controls and simple but addictive combo system make it an absolute delight to play.

The argument about video games being art usually relies on games with limited interactivity and unlimited pretension. But Guacamelee is not just art, but beautiful art at that. The fact that it was made by a small team of people without the backing of a large corporate empire makes it all the more wonderful, if not surprising in that regard. Guacamelee is a great game, regardless of its ‘indie’ stats, and the stigma that might carry. Not just a great indie game, but a great game, full stop. Anyone that knows me knows I’m super selective with the indie games I play. I’m way more of a AAA game guy, however, when I do play an indie game, it has to be something I find to have an interesting premise, a gorgeous non-pixelart style and provide me with a unique experience I can’t get from a AAA game. With those caveats in mind, my choice is Brothers: A Tale of Two Sons.

For me, no other game is as co-dependent on mechanics and story as Brothers: A Tale of Two Sons. What at first seemed like a novel approach to controls quickly becomes so inseparable from the story game director Josef Fares has told that it becomes nearly magical at the emotional climax. Few games have affected me the way Brothers did. I highly recommend this to everyone. It’s that good. Explosions, biceps, more explosions, and famous action heroes in majestic 8-bit glory. All of these things are what make Broforce my favorite indie game of all time. It crazy, simple, and fun to play, both by yourself and with your bros. The main premise of the game is that your bros have been kidnapped and its up to you to rescue them. Your army of bros is made up of action heroes from the 80’s, 90’s, and 2000’s, but with the word “bro” crammed into the name somehow. For example, the Broforce version of John Rambo from the Rambo series is named Rambro, and Will Smith from Men in Black is called the Bro in Black. Each bro has their own, character-specific weapon and ability; Rambro has a SMG as his primary weapon and throws grenades as his special, while the Bro in Black’s primary weapon is the Noisy Cricket and uses the Neuralyzer as his special.

As you rescue bros, they become playable and serve as your lives. When a bro dies, a new one gets tagged in, so you have to adjust the way you play depending on which bro you have out. This allows for great variations in gameplay throughout a level. The levels themselves are full-on sandboxes, allowing you blast new paths out of the platforms, which allows for infinite ways to approach a level. Oh, did I mention explosions, BECAUSE EVERYTHING EXPLODES AND ITS AWESOME! Who doesn’t love explosions?! I sure do! So if you like explosions, being an action hero, and crazy mayhem and fun, do yourself a favor and pick up Broforce NOW. I never expected to be as in love with Flower as I currently am, honestly. It seemed at initial face value to be a little too simple for my tastes, and the sort of experience that would only hold my attention for a fleeting moment. But damn, does that game still have a fierce hold on me years after it was first released on PS3, and well onto it’s perfectly appropriate return when the PS4 launched last November.

Right off the bat, the game is easily and without question still one of the most visually stunning games currently available, and the gyroscope-heavy controls are still as fluid and easy to get the hang of as ever. While the basic idea behind Flower is still as easy to understand as you might remember (Restore the balance of nature! Environmentalism! Yeah!), it’s not that that makes me want to pick up the game so much, it’s the fact that it’s essentially become my go-to gaming happy place. Having a bad day? Go float around the first level for a while, and start to feel the zen flow in to your soul. Trust me when I say that after spending a little while riding the wind, you’ll feel way better afterwards. So there you have some of the SpawnStaff’s favorite indie games, let us know what yours are!

Senior Staff Writer Karl has been an avid gamer since the days of the original PlayStation, it's a passion that took ahold of him at a young age and one that never let go. When he isn't playing games he's usually writing about them, or listening to The Killers. Metal Gear Solid is quite possibly his favourite gaming series of all time, having only initially purchased a PlayStation 3 to be able to experience Metal Gear Solid 4.
You might also like
Guacamelee!ArticlesFeatures