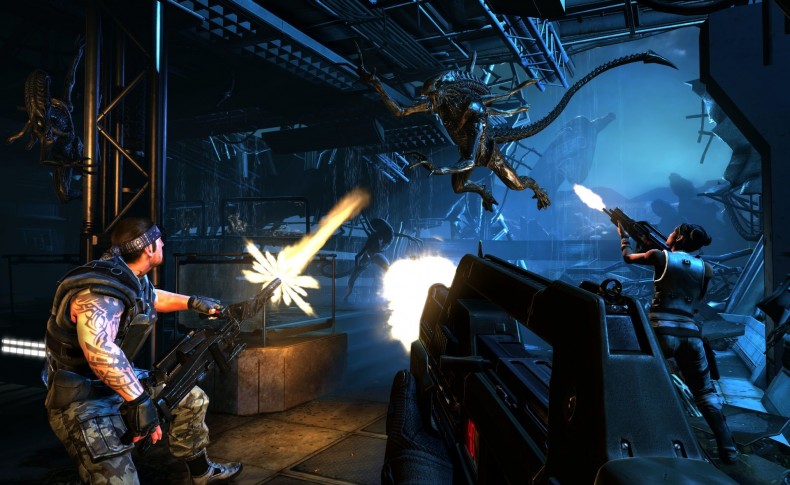 A Legacy of Trash

Yet again, another movie tie-in game keeps up the fine tradition of keeping the subgenre terrible whilst setting the bar for year’s worst movie-based game; that game is Aliens: Colonial Marines.Â  This game is so bad and made so many waves amongst the industry, that the developers are still trying to pin the blame on each other.Â  One thing is for certain though, they are all responsible for giving anybody within hearing range of this game a powerful headache.

Let’s start with the story: there is none.Â  The game merely places you in one iconic Aliens location to the next with the only two objectives being survive and defeat the evil corporation Weyland-Yutani.Â  For those of you who don’t know, the WY is an evil corporation hell-bent on subjugating the aliens in some sort of vague plan to take over the galaxy.Â  I can only assume that the people behind this business share a company picnic with employees of the Umbrella Corporation as they exchange hilarious stories of their misadventures and trademark business strategies.

The only attempt at telling a story happens when Hicks, a character from the films who just happens to die in one of said films, miraculously appears alive and well in the game.Â  In a horrendous attempt to fill this Grand Canyon of a plot hole, Hicks merely says that it is too long of a story.Â Â  This is not how to fill a plot hole, this is merely covering it up with a thin piece of plywood and asking the audience to walk across it.

If anything should be non-existent besides the story it would be the atrocious dialogue, particularly with the support character O’Neal.Â  Every line is forced into the players ears with a rusty ice pick and it doesn’t help any that the acting is just as bad.Â  To be fair, if the developers and writers aren’t making much of an effort, then why should the voice actors.

The only explanation for story is that the developers searched for Aliens fan fiction on the internet in an attempt to save money and after finding the most “coherent” story, paid the writer with a lump sum of $100 and an industrial-sized box of Hot Pockets. When players get the first whiff of the rotting gameplay, the first thing that will catch the player’s attention is the weapons.Â  Every weapon in the game is practically useless because they have no power behind them and they are extremely inaccurate.Â  Even the sniper rifle with an enhanced scope couldn’t hit the broadside of a barn even if the barrel was pressed up against its wall.

Strangely the most accurate guns from a distance are the four shotguns which, strangely enough, are only different cosmetically.Â  Something tells me the developers don’t know how this weapon actually works in reality.

Based on my experience, I couldn’t tell you how many times I would fire the pulse rifle directly at an advancing alien only to hit the creature about three to four times and have the rest of my ammo hit the wall behind it creating an alien-shaped cutout.Â  After the Alien punched a hole in my character’s face and performed the Captain Morgan pose on the corpse in victory for the umpteenth time, it became quite apparent to me that the game is unreasonably difficult when playing solo. This is because every enemy in the game has an ability that can kill the player with a single hit; especially the Weyland-Yutani commando’s grenades.

In a normal FPS, when an enemy manages to land a grenade in your lap, the player usually has enough time to run or find Jesus before the grenade blows them to kingdom come, but here the grenade indicator flashes once and then eviscerates the player.Â  It is unfair that these enemies can throw a grenade from across a large room and land it perfectly at your feet every time.Â  Apparently the prerequisite for hire as a Weyland-Yutani PMC is to have played for the New York Freaking Yankees.

Even without the insta-kills, regular attacks tear through armor and health almost as quickly.Â  Players can find armor packs around the environment but it doesn’t really help all too much considering the soldiers body armor is comprised of dirty aluminum foil stapled to cardboard.

When you have finished playing the campaign as a form of penance for whatever misdeed you committed, you can continue your self-punishment with the multiplayer.Â  In the MP, players can struggle with the weapons and controls with other people who also wish to share their misery.Â  What makes Aliens stand out from other multiplayer shooters is that one team takes the marines for a round and the others play as the aliens.

This sounds cool in theory, but gets old quickly upon the realization that the aliens play just as bad as the marines, and attack just as inaccurately.Â  The camera makes it quite difficult to figure if the alien is within gouging range and most of the time ended with the creature bullying the air.

The number one of the cardinal sins in multiplayer gaming for me, and will forever and always be, is spawn killing.Â  Every game I averaged about five to six spawn deaths per round because the terrible programming would throw me directly in front of an enemy player.Â  At this point I think the game has been doing everything in its power to offend every gamer on the planet.

The only positive thing I can say about this game, is every person who plays it will have a unique experience with one of the possibly hundreds of glitches found in the game.Â  I found some amusing ones as well.Â  At one point in the game, I watched a drunken alien attacking a wall.Â  Another was when I blew up an alien in the middle of my squad and watched his arm twirl around in the air like a sadistic game of spin the bottle. While I don’t believe good graphics equates to a good game, I was actually impressed with the graphics of the game…until I realized that I was not playing a game on my old PlayStation 2.Â  The textures are of poor quality even after they have finished rendering, the effects and animations are stiff and unconvincing, and for some reason so much of the game is blurry.

Everything more than three feet in front of the player’s vision is covered in a blue haze, the HUD details blur into the background, and worst of all, the iron sights of every weapon are also blurry.Â  Wait, hold on a second.Â  No wonder why all the gunfire is so inaccurate, the big badass space marine left his trifocals at home.

Painful, but Could Be Worse

Aliens: Colonial Marines is terrible and anybody looking for a good game based on the franchise would probably have better luck looking for actual alien life outside of Earth.Â  It’s offensive, stupid, and painful to play, yet there are still two more games that are far more painful to play.Â  After this and Duke Nukem Forever, I can’t wait until next year to see what other beloved franchise Gearbox will desecrate.

Former Contributor Chris West is a graduate of Texas Tech University where he earned his BS in Electronic Media in Communications. Chris has been passionate about games since he was a kid and today prefers games with a strong narrative. He also has a soft spot for horror games, legitimately scary games mind you, and any game claiming to be challenging, Dark Souls for example. When he isn't playing games, he is pursuing his other passions: music and photography. Chris can play both guitar and bass and then take high quality pictures of the performance with his camera. In the end, Chris enjoys writing about his passions and ideas, when he isn't destroying his friends in Call of Duty.
You might also like
Aliens Colonial MarinesArticlesOpinionChris West