Worth a Play – The House of the Dead: Overkill 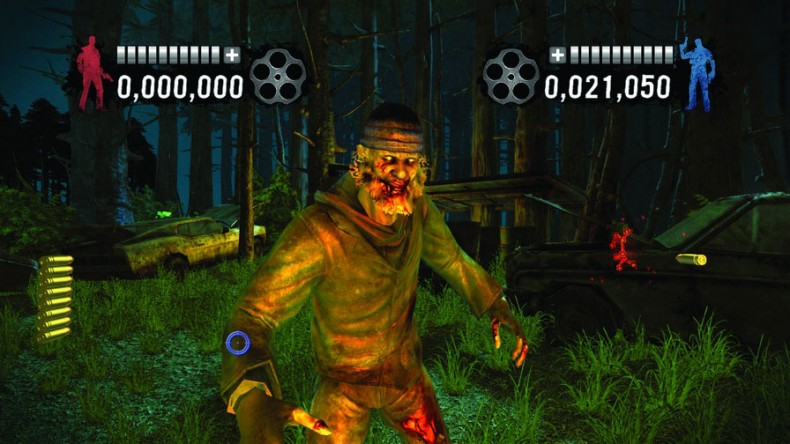 The last Worth a Play feature was on the subject of Spec Ops: The Line, a dark, harrowing, morally compromising take on the current American military shooter, which didnâ€™t aim to satirise the genre so much as eviscerate it. Itâ€™s the kind of game that demonstrates how gaming has matured as a medium over the years from the domain of brightly coloured plumbers to an art form that is capable of telling stories that can make even the most desensitised teen weep openly. So what game could possibly follow that you ask? What intelligent critique of modern culture will be exalted in the following paragraphs? Well how about a grindhouse themed on-rails light gun shooter for the Wii? No wait, come backâ€¦

As mentioned above, House of the Dead: Overkill (hereby referred to Overkill, because Iâ€™m lazy) is heavily influenced by grindhouse and exploitation films. The story follows two protagonists, renegade playboy cop Isaac Washington, and a badass but inexperienced Agent G in their quests to stop the evil Papa Caesar, who is causing people and corpses to become hideously mutated into creatures resembling zombies, and a whole host of worse things. Itâ€™s worth noting, before we go any further, that the writing in this game is absolutely stellar. The actual plot is fairly linear, with Washington and G chasing Papa Caesar across the fictional town of Bayou city and its environs, covering such typical horror staples as evil laboratories, creepy circuses and spooky swamps. And by spooky, I mean gross and full of zombies. But itâ€™s the dialogue that really shines in this, Washingtonâ€™s foul mouthed outbursts at the ridiculous situations and enemies and Gâ€™s acerbic put downs make it feel like the best worst buddy cop film never made. The other voice actors play their parts well; Papa Caesarâ€™s speech about sweet and sour sauce is probably one of the funniest little tirades in gaming dialogue history. And it really is funny, delivering consistently hilarious and intensely quotable lines throughout. I wonâ€™t list them here to save the laughs for later, but safe to say, if you donâ€™t find yourself even a little enmirthed (probably not a real word) by this game, then youâ€™re probably dead. Or a zombie.

The house of the Dead franchise started life in the arcades of old, where hard working boys and girls would save their pennies, and eschew the likes of the po faced Time Crisis and bizarre minigame-in-a-box Point Blank to shoot zombies, save civilians and generally suffer like G did. Overkill continues that fine tradition, shifting the action to your Wii and television, presumably because of all the complaints thereâ€™d otherwise be about all the profanity. That is to say, it functions pretty much like any light gun game youâ€™ve ever played. You point your Wiimote at the screen, using the corresponding cursor to line up a shot and press the B button to fire away. The game moves on rails, from one shooting gallery to the next, giving you a short amount of time to shoot all the enemies before youâ€™re either whisked away or get your face torn off. You can shoot the occasional power up to restore lost health or trigger bullet time, called MoFo time, or collect slightly hidden collectables that either unlock concept art, or more importantly increase your score. Each level ends with a protracted boss battle against some large and hideous foe, with attack patterns to memorise and weak spots to target.

Score is the most important factor in any arcade style experience, and Overkill is no exception. Every zombie you destroy nets you points, which then affords you the chance to best the gameâ€™s, or your own, high scores. It also translates into in game currency which you can use between each level to upgrade your weapons and unlock new ones. These range from the standard pistols to shotguns, assault rifles and even the fabled Handcannon. In keeping with the low budget movie vibe, each level is themed like a grindhouse film, complete with poster on the level select screen, awesomely corny title, (Ballistic Trauma anyone?) and some suitably low frequency voice over in the intro for that real exploitation feel. It is worth noting that the Wii is not a hugely powerful machine, graphics wise. And Overkill by no means taxes its graphical capacity. But this is intentional. The environments are dark and grimy, with the Wiiâ€™s lack of power making the especially fake looking blood effects resemble genuinely bad special effects. Itâ€™s also worth noting the game plays with its own continuity sometimes, with objects and people moving position as the cut scenes switch between camera angles. Itâ€™s a nice touch and it helps cement the gameâ€™s aesthetic very nicely. Other than that, the character and enemy designs are pretty good all round, from the regular zombies to swamp creatures to two headed circus freaks all getting their moment in the spotlight, before being summarily obliterated by our badass protagonists.

The soundtrack is also stellar, the funky tunes making the monster hunting all that more enjoyable when you can nod your head and tap your toes to the beat. In particular, the gameâ€™s main refrain, Dim Sum For Papa, is up there with the Legend of Zeldaâ€™s Lost Woods and the original Mario theme for the title of most catchy videogame tunes. Feel free to google it now, and see for yourself. You can thank me later.

Thereâ€™s nothing especially fancy about Overkillâ€™s multiplayer. Itâ€™s exactly the kind of two player co-op youâ€™d expect from a game like this. But it does make the whole experience a lot more fun, so I can heartily recommend getting yourself a pal before you spend your evening blasting the undead into bloody pieces. Itâ€™s worth it just to have someone to quote lines to afterwards, and then fall about laughing.

Honestly, I donâ€™t have much in the way of bad things to say about this game. It can be a little buggy in places, leading to a full console restart on a couple of occasions, but that only happens very occasionally. Itâ€™s too short, but like all the best things, leaves you wanting more. The short playthrough time is probably a good thing really, thereâ€™s nothing worse than a joke you get bored off. Some of the jokes could almost be considered a little offensive in places too, but as long as you take all the dialogue with the large pinch of salt that is definitely required youâ€™ll find yourself in stitches, for almost all of the all too brief running time. Completing the game the first time unlocks Directorâ€™s Cut mode, which offers extended versions of each level, and the MiniGun weapon, for the zombie killer who needs things done in a hurry. And as mentioned above, finding collectables in the game unlocks concept art and the usual type of McGuffins found in games for the obsessive collector.

Itâ€™s also worth noting that there was an HD remake released on the PS3, with tuned up graphics, extra levels and 3D support. Although it fits with the schlock horror styling, itâ€™s worth noting that the old-school red-blue 3D is awful and essentially renders the game unplayable. The tuned up graphics too, take something away, the smooth lines and improves textures taking away some of the originalâ€™s VHS grime. They even seem to have removed some of the originals deliberate continuity errors too, which is an amusing if detrimental touch. The new levels are a nice touch though, giving you some insight into what Varla Guns and her sidekick Candi Stryper (yes, those are their stripper names. And their real names too, apparently) got up too while she wasnâ€™t outbadassing the boys. It also supports PlayStation Move controls, but how could it not?

Why itâ€™s Worth a Play

House of the Dead: Overkill is a delight, pure and simple. In an age when games seem obsessed with po faced realism, and on a console famous for its family oriented content, itâ€™s nice to see a game this unconcerned with censorship, pandering or consistent object placement get made. And while it didnâ€™t quite get the recognition it deserved, it remains, in my opinion, one of the three 3rd party reasons to own a Wii. What are the other two you ask? Well thatâ€™s an article for another timeâ€¦

2 people like this
Articles, Features
Headstrong GamesOverkillSEGAThe House of the DeadWorth a play

Staff Writer Reuben is a student, a nerd and an all round SpaceBadass. When heâ€™s not playing games in his free time he reads anything he can get his hands on, is an aspiring stand-up comedian and makes gaming videos on Youtube. He decied to try writing because it was neater than leaving all of the words in his head, where they were liable to clutter the place up. Heâ€™s owned every iteration of the Pokemon franchise (he usually chooses the Grass starter, except Chikorita, because why would you?), completed Borderlands 2 more times than can possibly be good for his mental health and owns a worryingly large collection of gaming reference t-shirts. He usually plays both PS3 and Xbox 360 games, but is probably going to jump to PC for the next generation. He hopes to contribute as much to SpawnFirst as he can, and he feels really stange about writing in third person. He may also have over written his bio. Xbox Live: CruelCoffee, PSN and Steam: RoboFish_MkII
You might also like
OverkillArticles