Worth a Play – ‘The Amazing Spider-Man’ 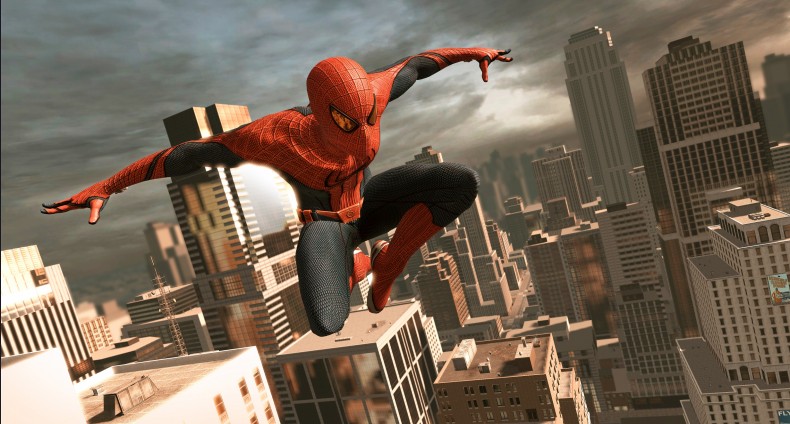 Most of the levels take place inside the Oscorp building, but you’ll also find yourself in the sewers of New York and on occasion fighting extravagant enemies on the streets of the city. Mission objectives are fairly varied so you won’t get bored having to do the same things over and over. There are 12 chapters to complete, and most of them take just under an hour to finish depending on how quickly you run through them. There’s plenty more to do once you’ve finished the main story if you like collecting… collectibles.

Some levels allow you to take a stealthy approach but this mechanic doesn’t really work that well. When you take to a ceiling it’s easy to lose your bearings as the camera changes to a very up-close almost first-person perspective and the movement controls become inverted, unless you move the camera back behind Spidey, which is really annoying. As a result of this I hardly ever opted to use stealth and I got through the game just fine. 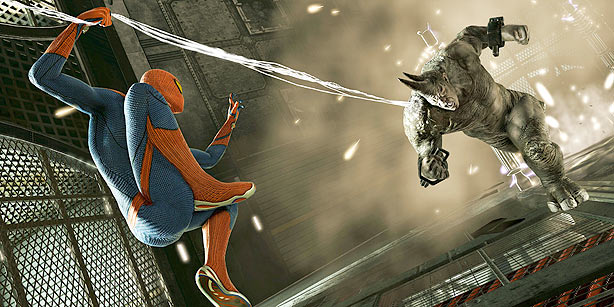 Traversing the city is fast and fluid. The camera is placed closer to Spider-Man than ever before so you can really get a sense of speed when swinging around the city. Something I found disappointing was the fact that whilst web swinging, after reaching the end of an arch you will automatically spin a new web and continue onwards. I used to enjoy just hanging from a web and creating my own momentum by swinging back and forth but now that’s no longer an option. It’s not a big deal, and swinging around the city is still incredibly fun, but it would have been nice to be able to deactivate automatic web swinging in the options.

In addition to web swinging you can traverse the city with the ‘Web-Rush’ feature, which is basically a fancier version of the web-zip from previous games. Simply tapping RB will send you flying somewhere in the general direction that you’re facing, however if you hold down RB then time slows down and you get a first-person view of all the available perches Spidey can currently reach indicated by a glowing Spider-Man outline. When you combine web swinging with the precision of web rushing, traversing the city becomes a real joy. 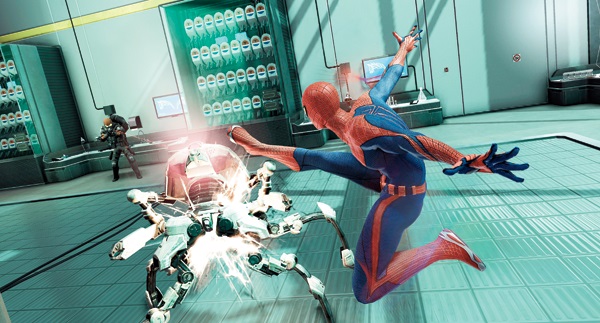 The combat system is derivative of Rocksteady’s Batman series, so if you’ve played those games you should feel right at home. Attacking and countering builds up your combo meter. When it’s high enough you can perform special attacks. The higher you build your combo meter the more XP you will earn. XP is used to increase your level, which in turn allows you to improve various different aspects of Spider-Man, from getting better, stronger attacks to increasing your health.

As much as I love Rocksteady’s Batman series one problem I have is that controlling Batman feels slow and sluggish, essentially like you’re controlling a walking tank. With Spider-Man being much more agile, combat seems to flow better. If you start to take too much of a beating you can web-retreat out of harms way to heal.

There’s plenty of post-game content when you’ve finished the main story. Lots of side-missions are scattered throughout the city, which can range from simply stopping a mugging to helping the police in various ways (for example, stopping a car chase); pretty typical Spider-Man stuff. If you just want to swing around the city then lots of comic book pages are spread around for you to find. Once you reach a set milestone of comics collected you can go to the extras menu and read the comics you’ve found. In addition to that, there are even extra costumes for you to unlock, which is a nice touch as most games would make you pay extra for such content these days.

Many will say that Treyarch’s Spider-Man 2 was the last truly great Spider-Man game. While there have been many games starring the web-head since then, they just failed to live up to its legacy of what a Spider-Man game should be. That said, this is a valiant effort on Beenox’s part, and if you’re a Spider-Man fan then The Amazing Spider-Man is definitely worth a play.

Senior Staff Writer Karl has been an avid gamer since the days of the original PlayStation, it's a passion that took ahold of him at a young age and one that never let go. When he isn't playing games he's usually writing about them, or listening to The Killers. Metal Gear Solid is quite possibly his favourite gaming series of all time, having only initially purchased a PlayStation 3 to be able to experience Metal Gear Solid 4.
You might also like
PCArticlesFeatures