Worth a Play – MadWorld 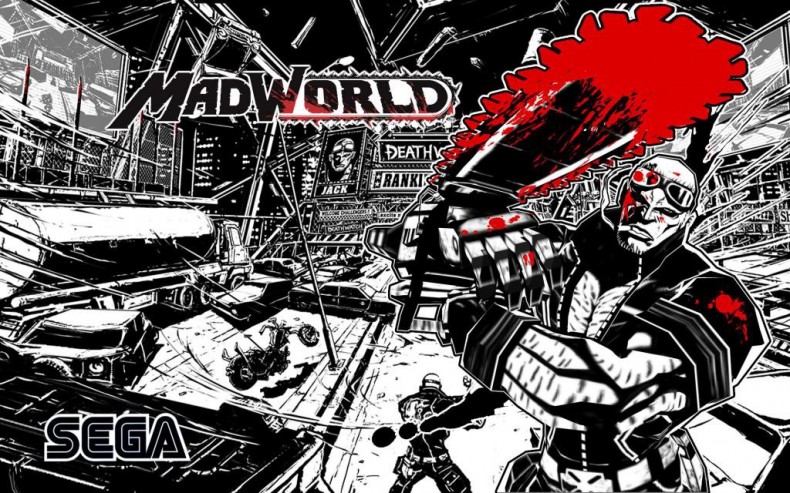 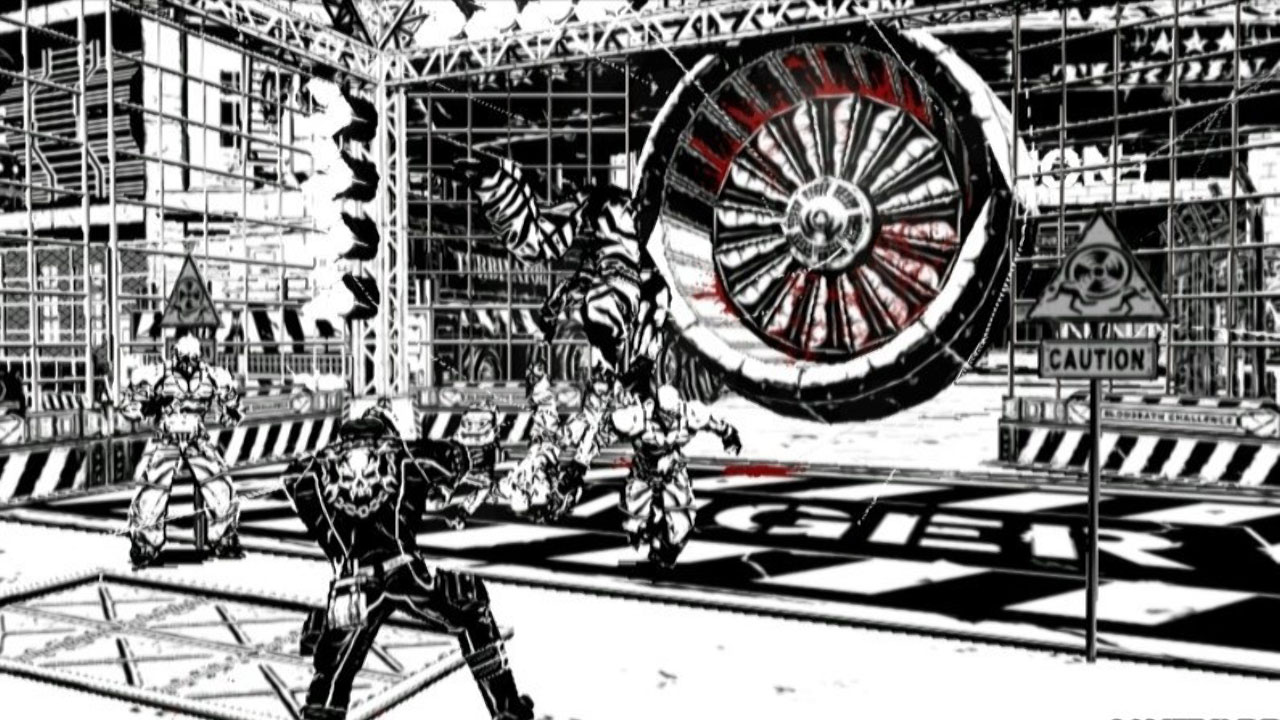 MadWorld takes place in a warped version of present day America, in Varrigan City, which may or may not be (but which totally is) New York. A shadowy terrorist organisation called The Organisers takes over the city, seize control of the communications towers, blow up the bridges in and out and release a deadly virus onto the populace. However they offer the terrified citizens a chance to save themselves from the hideous plague.Â  Theyâ€™re offering a cure, a free immunisation for anyone who doesnâ€™t want to bleed from every orifice and then die. The catch? In order to be given this life saving antidote, you have to kill someone. Anyone. Any way you like, preferably messily. But thereâ€™s a catch to becoming a murderer, aside from the obvious moral compromises. Once youâ€™ve killed, youâ€™re officially a contestant in the greatest game of gladiatorial combat ever conceived: DeathWatch. The goal of DeathWatch is simple. Kill or be killed. The more violent, deranged and over the top your kills, the more points youâ€™ll earn and with them the right to challenge the top ranked players in a bid to become champion. This, as itâ€™s revealed, was the true plan all along. The city is wired with cameras, broadcasting every violent confrontation to an audience of the obscenely rich. They in turn, take bets on the outcome of various fights, sponsor their own players, MadWorldâ€™s Killer Elite, with weapons, medical supplies and anything else they would need to bring the pain to the lower level murders, thugs and general neâ€™er do wells serving as their cannon fodder. So far, so totally badass, right?

But the spanner in this particular works is one Jack Cayman, a bounty hunter ostensibly tasked with extracting the Mayorâ€™s daughter, who is still trapped inside the besieged city. However, it quickly becomes apparent that Jack has motivations beyond simply wanting to rescue the princess. Heâ€™s got his own history with DeathWatch, a dark and shadowy past filled with chaos and bloodshed. Although given heâ€™s got a chainsaw for an arm, thatâ€™s hardly surprising, is it?

The mechanics of MadWorld are simple to learn, difficult to master and oh so satisfying to execute. Each level is a wide open, if limited, sandbox in which the player has total freedom to run around and cause mayhem. Itâ€™s populated entirely by vicious murders, run of the mill baddies for jack to brutalise for points. MadWorld is a game built around old school, arcade scoring derived from the level of violence you inflict on your enemies. Punching a peon in the face will net you a few points. Bisecting him with Jackâ€™s built in chainsaw a few more. But for the really big points, you need to utilise the various environmental hazards about the place. For example, to milk the maximum of points from a single goon, pummel him about the face, then slam a tire over his head and shoulders to trap him. Once youâ€™ve got him subdued, take a road sign, fence post or nearby piece of rusty pipe and slam them through his head. Or better yet, use all three of them. Then pick up the hapless and presumably nearly dead goon and slam him repeatedly on a spike affixed to a nearby wall. Or even better, you can throw him at a group of his buddies, knocking them all under the wheels of an oncoming train. All this is controlled by a mixture of traditional button mashing, and Wiimote based motion gestures that add another layer of stomach churning satisfaction to the proceedings.

Earning all those violence points unlocks a variety of things through the level, from extra weapons, to health items (onions) and my favourite element of MadWorld, the minigames. These are simple, and even by the standards of MadWorld, incredibly violent. They range from, â€˜How many enemies can you throw into a jet engine in 90 secondsâ€™ to â€˜use a baseball bat to hit enemies into a dart boardâ€™. Theyâ€™re challenging, worth tons of points and so very unbelievably fun. You also need to reach a certain pointâ€™s quota so unlock the boss of the stage, a huge set piece battle against one of the (metaphorically) colourful characters, each with their own unique style and mechanics.

The graphical presentation ofÂ MadWorld is an integral part of the game as the over the top violence. Black and white comic book visuals, heavily splattered with gallons of crimson blood, itâ€™s like Sin City if Frank Miller watched too much anime and action films. Each of the 5 â€˜worldsâ€™ has its own unique aesthetic, from the scenery to the enemy design to the boss battle at each levelâ€™s climax. The character design is particularly spectacular; Jack Cayman should be one of gamingâ€™s most iconic characters, and each of the bosses, from roller skating cowboy to werewolves to remote control robotic behemoth. The particular standout is the DeathWatch reigning champion the Black Baron. A cheesy cartoon pimp, a combination of every terrible stereo type you can imagine, who is in addition to being possibly the most offensive caricature in gaming, is also the funniest semi-antagonist in gaming history. At the start of each minigame, the Baron, accompanied by his dominatrix girlfriend Matilda, showcase the mechanics of the upcoming murderthon. Usual this takes the form of the silent but violent Matilda using her other half as a guinea pig to test whatever terrifying contraption theyâ€™ve put together. Heâ€™s always fine by the next level though, proof that you canâ€™t keep a good pimp down.

The soundtrack is also absolutely stellar, an albumâ€™s worth of atmospheric rock/rap tracks that complement the sadistic crunches, pops and screams that occur as a result of Jackâ€™s campaign of carnage. The other truly memorable thing about the game, audio wise is the commentary. Players are treated to the full DeathWatch experience, getting narration and banter from commentators Howard â€˜Buckshotâ€™ Holmes and Kreese Kreeley. Theyâ€™re voiced by comedian Greg Proops and voice of Bender/Marcus Fenix/Jake the dog John DiMaggio. These two are my other favourite things about the game; their profane, abusive and surprisingly charming conversations about the playerâ€™s progress lighten the otherwise oppressive tone of the game considerably.

The multiplayer is a little disappointing, compared to the rest of the game. Two players compete in the various minigames from the main games, to earn high scores. Thatâ€™s it really. Like I said, disappointing.

There arenâ€™t many issues with this game. The graphics style is a little distracting at first, and in some of the later levels the two tone backgrounds can become a little hard to navigate, but itâ€™s hardly a game breaker. Also, some of the motion controls can be a little unresponsive which can be rather frustrating at times, especially when engaged in a QTE in the middle of a boss battle. This seems especially problematic to vertical slashing motions. Iâ€™m looking at you â€˜The Shamansâ€™.

Sadly there arenâ€™t many of extras to the game. Itâ€™s a little short and thereâ€™s not a lot to do once youâ€™ve completed the story, except go back and re-complete the previous levels to improve your high scores. A new game plus mode would have been wonderful, but I guess you canâ€™t have everything.

Why Itâ€™s Worth A Play

MadWorldÂ is truly a one of a kind game. A ridiculous over the top example of how much fun a game can be when you stop trying to impress people with your seriousness and dedication. Much like Overkill, itâ€™s a title that has absolutely no place on the Wii and is all the more wonderful and brilliant for it. So if youâ€™re over 18 and looking for an excuse to murder some fools in glorious monochrome, get MadWorld, get your chainsaws, and get to killing. And remember kids: winners donâ€™t do drugs. They immolate people instead.

Staff Writer Reuben is a student, a nerd and an all round SpaceBadass. When heâ€™s not playing games in his free time he reads anything he can get his hands on, is an aspiring stand-up comedian and makes gaming videos on Youtube. He decied to try writing because it was neater than leaving all of the words in his head, where they were liable to clutter the place up. Heâ€™s owned every iteration of the Pokemon franchise (he usually chooses the Grass starter, except Chikorita, because why would you?), completed Borderlands 2 more times than can possibly be good for his mental health and owns a worryingly large collection of gaming reference t-shirts. He usually plays both PS3 and Xbox 360 games, but is probably going to jump to PC for the next generation. He hopes to contribute as much to SpawnFirst as he can, and he feels really stange about writing in third person. He may also have over written his bio. Xbox Live: CruelCoffee, PSN and Steam: RoboFish_MkII
You might also like
Platinum Games