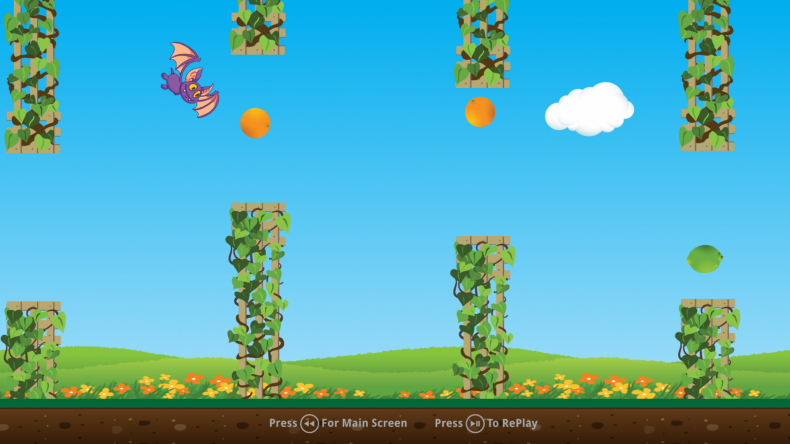 Despite the many ragequits and subsequent rise of therapy tutorials, the wild popularity of the game Flappy Bird is something not soon to be forgotten. While its return on iOS and Androids is now almost nothing more than wishful thinking, a dark horse has emerged in the form of a game built off the same engine, called Flappy Fruit Bat. Crave Creative Games is excited to announce that the game will be available for the Amazon Fire TV.

Many people would of course like to know that the actual differences are between Flappy Bird and Flappy Fruit Bat, if any. First and foremost is the blatantly obvious difference between the winged specimens. After hundreds upon thousands of death, the dear bird that flew to its death into pipes so many times must have finally flittered for its last time before plummeting, and reincarnated as a Zubat. Not really. On a a slightly more serious note, there are a number of differences in the form of improvements that have been added in Flappy Fruit Bat that makes it slightly more rewarding to play.

In Flappy Fruit Bat,Â the medals awarded for certain score thresholds are still present, but to make the gameplay more engaging and easier to focus on, pieces of fruit have been added in the open spaces between the garden hedge sets, kind of serving as an underlying bread crumb trail and a guiding beacon for each new set. The bat also flies continually to the right side, with players required to tap the screen at the right moments for the bat to fly. Time it wrong, and it will collide with the garden hedges. Wait too long, and gravity will embrace it.

Flappy Bird may not be coming back, but players can enjoy a similar experience and relive the joys and pains of the addiction to the game.

Senior Staff Writer Rudolf is a Journalism graduate who has an obsession with video game collectorâ€™s editions, which is matched only by his objective of moving to Canada and firmly establishing himself as a games journalist. His taste for adventure can only be satisfied by action-adventure games, sizzling steaks and dreams of gliding through the air on a snowboard.
You might also like
amazonFlappy bird