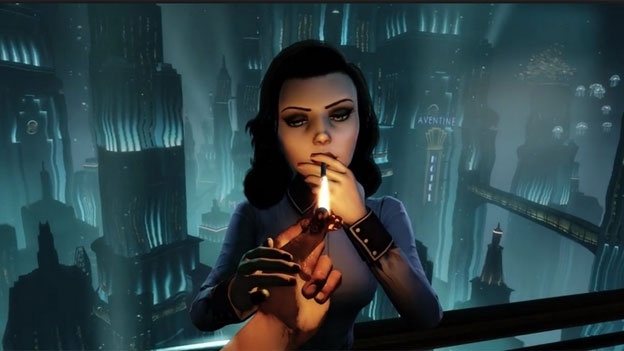 Irrational has finally announced details about the DLC that will be available to BioShock Infinite Season Pass holders. In these DLCs will be challenge maps and also new story content which will be set in Rapture (where both BioShock and BioShock 2 were set).

Available as of today is the first piece of DLC, Clash in the Clouds. This DLC will be a combat-focused set of challenges which can be found throughout Columbia. It alsoÂ includes four challenge maps; The Ops Zeal, Duke & Dimwit Theatre, Emporia Arcade and Raven’s Tomb. There will be 15 waves per challenge map and eachÂ wave will have an objective.Â Leaderboards will also track yourÂ score on each map, whichÂ you can then compare to your friends.Â For you non-Season Pass holders, Clash in the Clouds will cost a reasonable $5.

A nice addition to Clash in the Clouds DLCÂ is the Columbia Archaeological Society, which is an in-game museum. Players will be able to explore the museum and view concept art, behind-the-scenes videos and much more.

A two-part story titled Burial at Sea will also be arriving to BioShock Infinite, which will make up theÂ remaining two pieces of DLC which will come with the Season Pass. Separately, each part will cost $14.99. The first part will be set in Rapture on December 31st, 1958, the night before the fall of Rapture. Players will take on the role of Booker DeWitt. In the second part, Elizabeth will be playable, howeverÂ barely anyÂ details have been given.

Regarding Burial at Sea, BioShock creator, Ken Levine told IGN in an interviewÂ that: â€œItâ€™s really a story of Booker and Elizabeth again, but set against the backdrop of pre-fall Raptureâ€.

Former Staff Writer Mark is an Irish student passionate about games. He enjoys playing sports such as soccer and rugby, but loves playing video games at any time possible. Mark plays mostly on the Xbox 360, but also plays on the PC from time to time. He is a multiplayer manic and also loves to delve into deep storylines within RPGs.
You might also like
bioshock infiniteBurial at SeaDLC