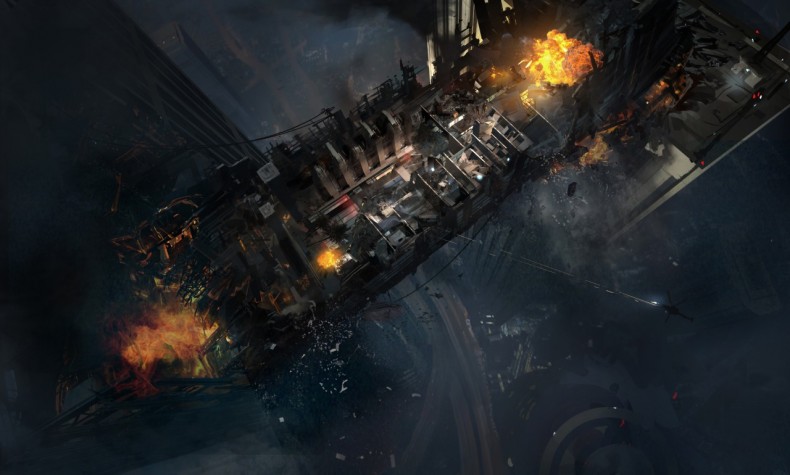 Similar to Call of Duty: Black Ops 2, Call of Duty: Ghosts will have a bonus map available to players who pre-order the game. The multiplayer bonus map, named Free Fall uses map events that will change the environment during the match. According to Infinity Ward, Free Fall â€œdrops players into a shattered skyscraper on the brink of collapseâ€. The map event will most likely be the crumbling of the skyscraper, which willÂ ultimately changeÂ the landscape of the level. Activision described the map saying: â€œSideways staircases climb into the night sky, elevator shafts run along the ground, and what were once windows now form a terrifying glass floor, hundreds of feet above the city streets. Free Fallâ€™s close-quarters combat and frenetic action are then thrown into overdrive as the ruined skyscraper continues to fall throughout the match. With every drop, the accompanying shockwaves cause further destruction, disrupting sightlines and constantly evolving paths and chokepoints as the map changes in real-time.”

If you want Free Fall, you’ll have to pre-order Call of Duty: Ghosts which releases on November 5th, 2013.

Former Staff Writer Mark is an Irish student passionate about games. He enjoys playing sports such as soccer and rugby, but loves playing video games at any time possible. Mark plays mostly on the Xbox 360, but also plays on the PC from time to time. He is a multiplayer manic and also loves to delve into deep storylines within RPGs.
You might also like
Call of Duty GhostsDLC