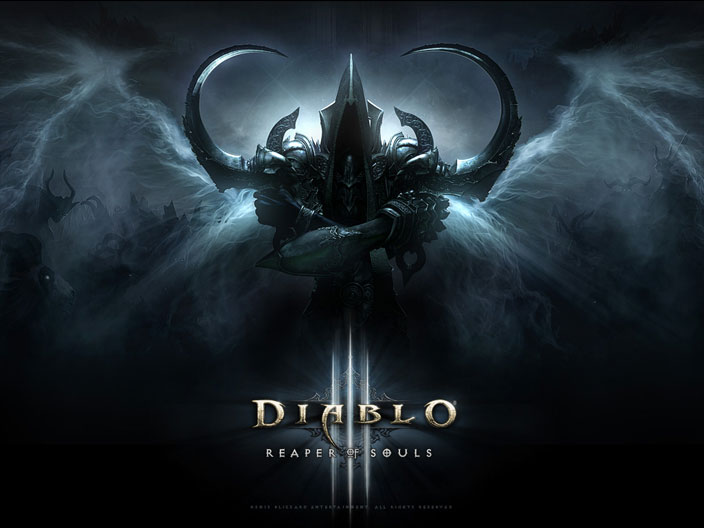 SpawnFirst is live from Dragon Con 2013 and bringing you live updates as we get them.

One thing is for sure, Blizzard knows how to rock an opening cinematic. Â Blizzard’s new Diablo III expansion “Reaper of Souls” offers enhanced gameplay, better loot, a new class, and updates that will please Diablo fans. Â As Alex Maberry, the senior producer on Diablo III, says, Diablo is about heroes that are larger than life, starts from meager beginnings, and characters who achieve godlike status. Â RoS offers a new villain: Malthael, death himself, a fallen angel of wisdom whose goal is to end eternal conflict by wiping out the blight that is humanity. Â He intends to wipe out the city of West March and then Sanctuary. Â Your mission? Â Stop his plans.

Blizzard promises what they call Loot 2.0, and another player class, the Crusader, a natural tank with a tower shield and flails. Â Blizzard is also upping the player cap to 70, which will impact all of your Diablo III characters.

You can expect Westmarch to be a dark, post-apocalyptic wasteland. Â Malthael’s death angels are setting up soul crucibles to turn people into reapers for Malthael’s army. Â There are new enemies too: the seraph, a ranged malevolent caster; a summoner of the dead who appears weak but slows you down as he raises up an army around you; the Punisher, whose name is appropriate to the punishing attacks he levies down upon you; and the death maidens, fallen angels who do Malthael’s bidding.

The new class is the Crusader, a member of the Paladin order. Â At the end of Diablo II, the Crusaders pushed east on a secret mission, but they have returned to combat Malthael. Â Blizzard sought to set up a new class to fulfill whatever lacked in the existing Diablo III classes, which led them to a mid-range melee crusader with tower shields that are more than just for defense. Â The Crusader can wield almost any weapon, but his primary is the flail. Â He is, in essence, a war machine made human, according to Maberry. Â Among his attack moves are the shield bash, which smashes the enemy in the face, pushing him back, the fist of heavens, which shows off the crusader’s ranged attack, and the falling sword, which changes the crusader into a bolt of holy energy. Â Overheard at Dragon Con? Â “That’s going to get abused.” Â The Crusader will be playable from level one after the new expansion.

Among the other changes that RoS offers is more legendary items with more interesting affixes. Â Smart drops are also a feature: when an item is dropped, it has a higher chance of being aimed at your class, which is designed at potentially impacting your build and the way you play. Â As part of their preparation and testing for this update, Blizzard ran a playtest with a level 40 paragon from start to finish. Â The old looting system was ineffective: at random, 256 white items were dropped, 399 blue, 275 yellow, and only one legendary. Â In Loot 2.0, 73 white items, 266 blue, 83 yellow, and 6 (!) legendary. Â In addition to this, the mystic artisan is back, and she has the power to transmogrify or enchant your items. Â The transmogrify effect offers you the opportunity to change an existing item into the physical appearance of any other of the same item you’ve ever possessed (no more problems matching up your gear). Â The enchant effect allows you to re-roll the stats on your items– at your player level.

They also want to change the endgame in a strategy they call “Endgame for everyone, more ways to play, loot, and stay.” Â One of the ways they’ve done this is offer a loot run, which is a 15-20 minute dungeon. Â The dungeon draws at random from environments all over the game, with randomized weather and lightning and monsters. Â At the end of every loot run is a monster with something cool to be dropped.

Another addition is Paragon 2.0: while historically Diablo has done this behind the scenes, players will now be given points with every paragon upgrade to be spent on whatever skill or ability you see fit. Â The level cap will be gone, and it’s account-wide, which means you’ll be able to spend those points on whichever character you want. Â All of these new mechanics will be available in an upgrade pack prior to release of the expansion itself. Â Only the Crusader and Act Five will be restricted to the expansion. Â You can also look forward to more follower side quests, though the followers themselves will not be fundamentally impacted by the update.

As for PvP, it’s something Blizzard is looking at but probably not for RoS. Â According to Maberry, they want it to be a deep and meaningful experience– and something fun. Â While Diablo III is available on Xbox 360 and PS3 on Tuesday, the 4th of September, we can’t look forward to RoS on consoles any time soon. No release date yet on RoS, either; as Maberry said, “It’ll be done when it’s done.”

“No one can stop death.” — Malthael

Former Staff Writer Alice is a novelist, Shakespearean actress, and gamer who once survived emergency surgery in Bangladesh, but still finds most video games more exciting. She still has recurring nightmares about Uninvited (from 1986) thanks to an early childhood playing games on an ancient Mac. She's played Mass Effect more times than most people should own up to and is eagerly awaiting her very own episode of Intervention, which will likely be the Best. Episode. Ever. She also occasionally speaks German, but only when it's most inappropriate.
You might also like
BlizzardDiablo IIIPC