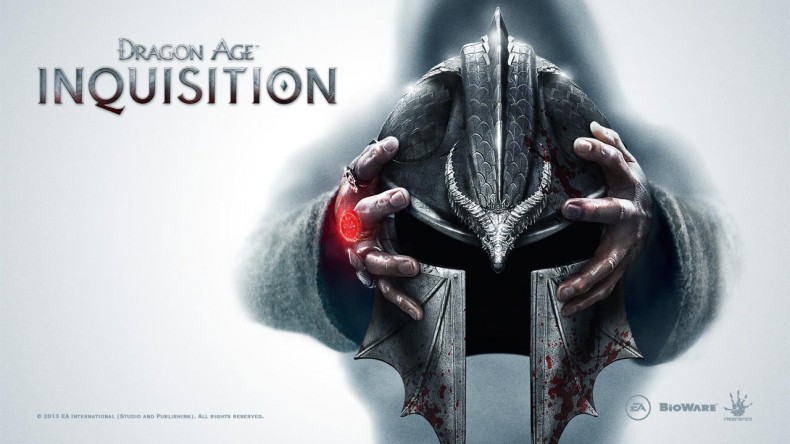 The one thing that can sum up BioWare’s Dragon Age: Inquisition, the worthy and exciting follow-up to BioWare’s sometimes-disappointingÂ Dragon Age 2? Â “Shut up and take our money.”*

There was something weird about the Dragon Age session at Dragon Con before it began. Â The panel before it, a Dishonored: Behind the Scenes, had barely just began when we arrived, to be greeted by a line that had already looped back onto itself. Â Among those already in line was a group of Dragon Age cosplayers, all perfectly coordinated (imagine the indignity of two Morrigans showing up at the same event!), and everyone waited patiently for an hour-and-a-half for an hour long session. Â Â As one organizer noted, “We didn’t even line these guys up until a few days ago!” (some last-minute fan-tweeting got them to Atlanta), and the room filled easily an hour before the panel was scheduled to begin. Â The excitement and emotion in the room was palpable. Â David Gaider, the senior writer on the Dragon Age series, and Aidan Scanlan, the Director of Design at BioWare, opened with a few absinthe stories that involve Obsidian’s Chris Avellone and probably need to stay at Dragon Con, and then they asked, “Did everyone see what happened earlier today at PAX?” Â (Those of us at Dragon Con know that most of us have almost no internet on our phones at any given time– the answer was, resoundingly, no.) Â Great, Gaider and Aidan said. Â We’re going to show you. Inquisition takes place a couple of months after Cassandra’s interrogation of Varric inÂ Dragon Age 2, which make its events concurrent to DA2. Â War is plaguing the land, and magic has broken the skies. Â You play the Inquisitor, the leader of the Inquisition, looking for truth and seeking to settle unrest in all of the land. Â Inquisition looks to be pretty immediately a BioWare game– in the best of ways. Â Its beautiful landscapes resemble the best of Bethesda’s Elder Scrolls IV: Oblivion, its quippy companion characters are purely BioWare, and its emphasis on choice, though primarily only alluded to, is one made famous by BioWare. Â Crestwood is the first set piece introduced by BioWare, and they tout it as being both bigger than anything in Dragon Age 2 and yet not as big as the biggest land in DGI. Â As you run through the flowered hills, you come over a crest to see a rift in the sky that resembles the aurora borealis but is startlingly more sinister.

BioWare, as always, is focused on player choice, but Inquisition takes on a more strategic view– you, as the Inquisitor, choose the path of the Inquisition, and, subsequently, the tenor of it. Â You have spies and agents working on your behalf all across the land, various assets you can use to determine the future of the Inquisition. Â This seems at first blush to be far from the binary paragon/renegade choices of this writer’s favorite game, but instead seem to spread beyond immediate choices to the far-reaching implications of a nation-wide war. “Think about the adventure,” BioWare says. Â Gone are the health potions of yesteryear, and the future is fewer potions and no more healing after combat. Â Combat is no longer relegated to single instances– strategy has to become part of the conversation for Dragon Age players.

An example of this offered by BioWare is in sending men to save a village or sending them to bolster a keep– the long-term implications of both of these will play out in different ways. Â The choices you make will open up and close off areas of the game. Â When asked if this would necessitate many playthroughs, Gaider noted just that this would become an issue of balance for BioWare in the next year of development.

So what else is new? Â One of the most exciting additions is a playable qunari race, both as female and male (which was met by much applause in the Dragon Con room).

Another significant change is one of strategic and Â tactical combat; as in the prior two games, both the player-character and the companions are controllable in combat, but Inquisition offers a more strategic command of combat situations. Â A new top-down view and an ability to completely pause and plan actions while in combat offer the player the option of orchestrating and better using all of the abilities of your characters. Â One particularly impressive demonstration of this came in capturing a keep– Cassandra, now a companion character, batters down the doors of a keep controlled by cultists, and your mage companion rushes to freeze some archers, enabling you to take down an entire bridge with a few waves of your two-handed sword. Â But beware of your enemies: you could very well wander in to a situation where you aren’t leveled to be able to beat your attackers. Â Walking away from combat is also an option– to return later, better weapons, better abilities, better skills in tow. All along the landscape are caves woven seamlessly into the gameplay; no load screens, says BioWare. Â These are open for exploration but not required. Â Dragons will also feature heavily, and there are several scattered throughout the game, all with their own unique challenges. Â All are optional, but all are designed to stretch the player to their limits. Â In one example of this, a dragon flying overhead scorches the earth with a river of flame.

As part of your grand Inquisition plan, as you take over keeps to enable you to try to fix what’s wrong in the land, you can customize those keeps– will you have it a haven for spies, a center of commerce, or a military stronghold? Â You may also seek to build monuments that enhance the Inquisition’s standing, or you may cap vents that block off poisonous gases, opening up new areas.

And your companions? Â Lots of romance, says Gaider (though he makes no promises about who are romance options). Â Additionally, rather than the companion-driven dialogue moments of DA2, Inquisition shifts back to the player-driven companion interaction of Origins— think the base camp. Â And as for returning friends, Varric and Cassandra feature heavily in the preview, and we can probably expect to see many more familiar faces along the way. Â Sandal’s prophecy will also be discovered in Inquisition. Â

And don’t worry, says Bioware, it won’t be a Dragon Age game without ugly mage hats.

A new import system will also allow players to customize the world of their Inquisition game by making large or small choices prior to gameplay. Â Alistair or Loghain as a Grey Warden? Â Who was on the throne at the end of DAO? Â This is designed in part to offer the players a chance to see how the world is impacted by various choices without necessarily playing through DAO and DA2 again to facilitate those choices. Â BioWare acknowledges that their import system is faulty, so don’t expect to be able to import full saves from either earlier game.

Dragon Age: Inquisition is planned to be out in fall 2014, but based on what we saw here at Dragon Con, you may as well start salivating now. Â BioWare looks to have a masterpiece on their hands.

* Courtesy of one many excited fans.

Former Staff Writer Alice is a novelist, Shakespearean actress, and gamer who once survived emergency surgery in Bangladesh, but still finds most video games more exciting. She still has recurring nightmares about Uninvited (from 1986) thanks to an early childhood playing games on an ancient Mac. She's played Mass Effect more times than most people should own up to and is eagerly awaiting her very own episode of Intervention, which will likely be the Best. Episode. Ever. She also occasionally speaks German, but only when it's most inappropriate.
You might also like
biowaredragon agedragon age inquisition