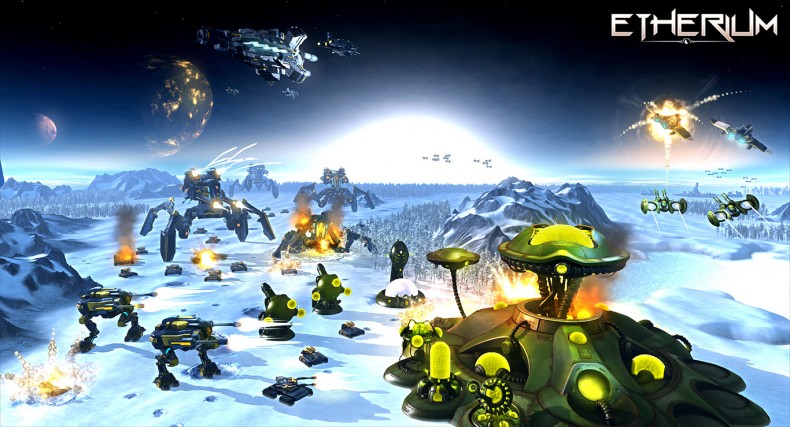 If you are a fan of Real Time Strategy game play, EtheriumÂ  may be something to watch out for. It boasts decent graphics (More like something from Borderlands , cartoony), fast paced game play, with solo campaign and multiplayer. Although this doesn’t look like any kind of StarCraftÂ  killer, It does look promising, unfortunately there isn’t a release date or pricing available as of yet, that’s something to keep an ear out for.

Etherium is actually a mineral/resource that is hard to find, and only held on a handful of planets. The 3 races are competing to take control of this substance, in order to be the largest super power. Each race has it’s own strengths and weaknesses, but you need to pick one to play when you start the game, just like other RTS games. No Halo race/faction changing for you.

“While the first video only showed a single faction-the Consortium-and the sand planet Serenade, today’s trailer reveals all three playable factions locking their troops in battle on two more of the six planets that will serve as battlegrounds. The ice world Arctis and the volcanic planet Pilo both provide environmental challenges and unique climatic events. The first battles promise to be quite intense, and one thing is for sure: the Consortium, the Vectides and the Intari are in for a large-scale conflict!”

The solo campaign in Etherium isn’t linear: you decide how to annihilate your enemies. You grab minerals, build armies, either get taken by a faster opponent, or take them yourself with an army comprising of numerous units: infantry, tanks, aircraft, and even gigantic Colossi (Hello Starcraft); “real machines of destruction!” tech research allows you to unlock new units and upgrades, access new structures, and use new special skills.
“Etherium has a unique and dynamic weather system that has a direct impact on your strategy. Use a sandstorm to approach the enemy base unseen, or mount a rearguard attack by crossing a freezing river. Each of the 7 planets has diverse environments, and varied terrain that will force you to adapt your
strategy: arid desert, swamps that impede tanks, icy worlds, island archipelagos…”

Staff Writer Luke "FoxJester" Cobham can be seen in the wild helping other folk with their various plumbing problems and disasters. Commonly you will see him wade into a vast sh*t storm in order to save the others drowning within. Less frequently seen however, is when the majestic FoxJester is hidden in his man cave playing numerous video games, or beating people senseless with large bladed weaponry, in which he has been training with since 7 years of age. Video game Journalism however, seems to be this creatures true calling, throwing news, opinion pieces, and reviews at Spawn First as if he were a crazy poop throwing Jabberwocky. Oh, and he's Canadian.
You might also like
Announcementsnewsvideo