Fans Irate at Not Being Able to Try Xbox One UI 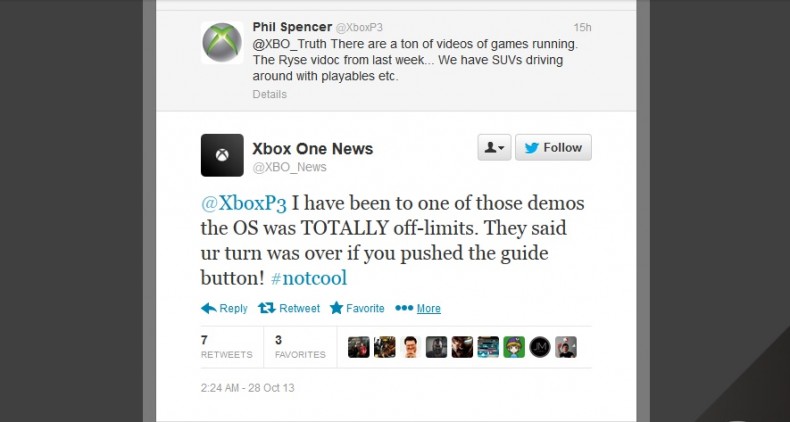 Some really interesting pieces of news have been coming out as of late. Most recently, with the apparent bombshell of OS and Xbox Live issues, that came in via Dodd Scientifics, Phil Spencer has been receiving some prettyÂ interesting feedback from fans who have attended the Xbox One Tour.

@XboxP3 I have been to one of those demos the OS was TOTALLY off-limits. They said ur turn was over if you pushed the guide button! #notcool

It seems like the attendants did not want the guests to just go into the Xbox One UI to mess around, possibly because that part of the functionality of the Xbox One is not ready to be fully revealed to the general public. Some speculation becoming popular is the that the UI and other functionality is still being worked on to address current/previously existing issues, and the last thing MS needs is for the wrongs hands to get into the system. The below statement on Twitter by rep Albert Penello aren’t helping Microsoft’s case either:

@Srkuse82 It's an excellent representation of the real UI. There are a lot of logistics and licensing issues doing a direct feed.

Whichever way it works out, it would be bad PR for Microsoft. (Personally, I’d say to the attendees to only play and do what they are allowed to). Microsoft will open up the UI either on launch, or at some other media event when it’s ready to be shown. Have some patience, fellow gamers!

Founder/Consultant Growing up in different countries, Karam has a unique global perspective about gaming. He brings with him that set of eyes and ears that can look at the state of gaming from afar. His gaming loves cover just about every genre, and he is a constant presence on Xbox Live and PSN. Karam is a Systems Administrator by day and lives in Georgia with his wife and three children. By night he transforms into Aye Karamba (Live) or Aaqiloon (PSN), and his virtual aliases live online.
You might also like
Phil Spencerxbox oneXbox One Tour

Phil Spencer Takes Over as Head of Xbox