Flappy Bird Gets a Makeover by eBattalion 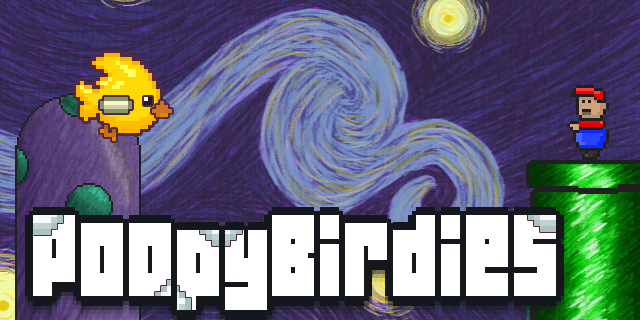 As you may now, Flappy BirdÂ  is a hit; challenging people with the prospect of pushing a singular button to achieve height, in order to pass obstacles, and defeat the constantly moving level.

Now, eBattalion has launched their own version of Flappy Bird, but with poop, and Mario’s that laugh at your inevitable failure. Originally called “Flappy Birdies”, it has now been dubbed “Poopy Birdies“, How Quaint.

Aside from the usual flapping, and hitting things, you also get a feature of (as I have been mentioning) floating piles of poop which you can “absorb” in order to give yourself “ammunition” (wink wink) to take out those pesky Mario’s that are running around the level… By pooping on them…

Other features include Yoshi’s Island inspired artwork, competing against your friends high scores, funny extras and plenty of bronze, silver, gold, and platinum medals to be won. (In the game of course)

Oh, did I mention that it’s free? I guess not, well, now I have. I’m sorry Flappy Bird, but your poopy brother just knows more about me. Being a plumber myself and all.

Staff Writer Luke "FoxJester" Cobham can be seen in the wild helping other folk with their various plumbing problems and disasters. Commonly you will see him wade into a vast sh*t storm in order to save the others drowning within. Less frequently seen however, is when the majestic FoxJester is hidden in his man cave playing numerous video games, or beating people senseless with large bladed weaponry, in which he has been training with since 7 years of age. Video game Journalism however, seems to be this creatures true calling, throwing news, opinion pieces, and reviews at Spawn First as if he were a crazy poop throwing Jabberwocky. Oh, and he's Canadian.
You might also like
Flappy birdnews