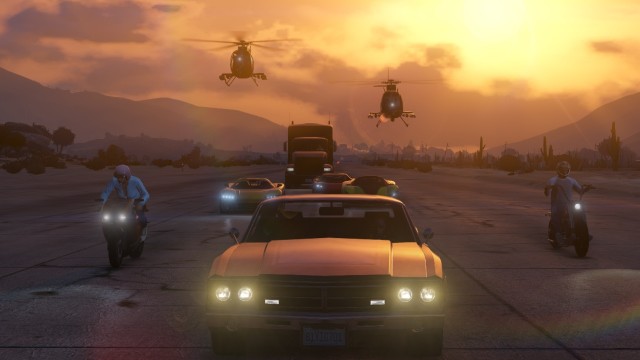 According to some information found on the forum at Opa-Ages.com, a pre-order downloadable copy of Grand Theft Auto 5 can be found through an exploit in the PlayStation Store.

Initially verified on GTAForums by forum frequenters, this downloadable pre-load is around 18 gigabytes in size, and already has been downloaded by various people (along with pictures proving that they were able to).

And before you would-be piraters start frenzying, you still wonâ€™t be able to play the copy since the pre-order lock is still active on the downloaded file.

Sony or Rockstar have yet to comment on the pre-loadÂ leak, but be sure that this exploit will be locked down and fixed before the sun comes up.

ThoughÂ this pre-loadÂ leak definitely doesn’t fix the issue of a full PS3 version of the game now floating out in the wild, awaiting possible hundreds of thousands of downloads/torrents if a hack is found to bypass the pre-order lock on the files.

At this point, anyone wary of GTA 5 spoilers would best be served by keeping their eyes and ears far away from gaming forums and other places where spoilers might be discussed openly. Just a word of warning.

Founder/Consultant Growing up in different countries, Karam has a unique global perspective about gaming. He brings with him that set of eyes and ears that can look at the state of gaming from afar. His gaming loves cover just about every genre, and he is a constant presence on Xbox Live and PSN. Karam is a Systems Administrator by day and lives in Georgia with his wife and three children. By night he transforms into Aye Karamba (Live) or Aaqiloon (PSN), and his virtual aliases live online.
You might also like
Grand Theft Auto 5