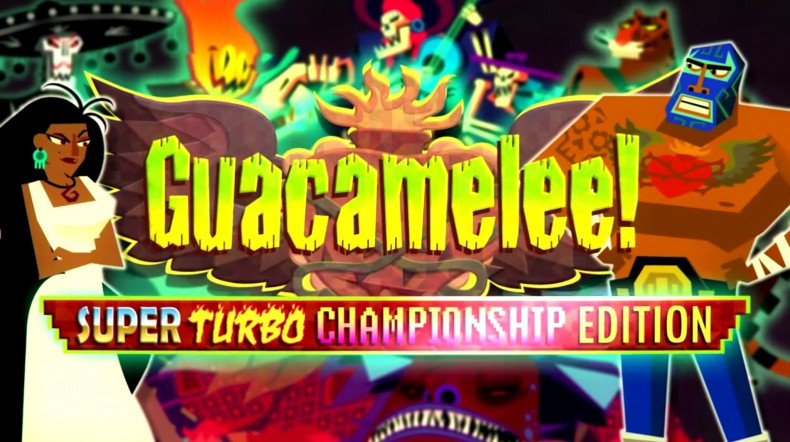 Guacamelee!, the Luchador-heavy indie platformer that came out for PS3 and Vita last April, is officially heading to PS4, Xbox One, Xbox 360, and Wii U on July 1 in the form of a “Super Turbo Championship Edition” with loads of new features, levels, and boss battles thrown into the mix.

Matthew Johns, Production Assistant from developer Drink Box Studios on Sony’s official PlayStation Blog, had this to say about the updated release:

Guacamelee! Super Turbo Championship Edition has all the great action from the original game, including both the costume and the Infierno DLC and we’ve added a bunch of new content to enhance your Guac experience.

We’ve also added a new boss, El Trio, A.K.A “Terrible Trio.” They are a three-headed skeleton in charge of assembling Carlos Calaca’s army of skeletons from a skeleton factory inside a volcano. El Trio Appears in a few areas in the game to throw new enemy prototypes in your path and a few new puns as well.

When it hits July 1, Super Turbo Championship Edition will be $14.99.

Hi! I'm Tony. I'm 26 years years old and Currently living in Fayetteville, North Carolina. I've been a gamer for the Majority of my existence, stretching as far back as the SNES days. I currently own a PS3 and a PS4, but am open to anything and everything. literally, I'll pick up a controller and play anything once. I'm also pretty much the biggest and most well rounded nerd you'll ever encounter, with a love for sci-fi/fantasy/comic book everything. I also, love music, literature, and art. I guess you could call me creative! When I'm not indulging myself in any of the above things, I'm a freelance photographer, focused mainly on concerts and events and big events around NC, and a writer who writes about the people involved in said events. I'm also about to be writing a bit for gamereviews.com so yeah, hit me up if you want to know more!
You might also like
Guacamelee!ps4Wii U