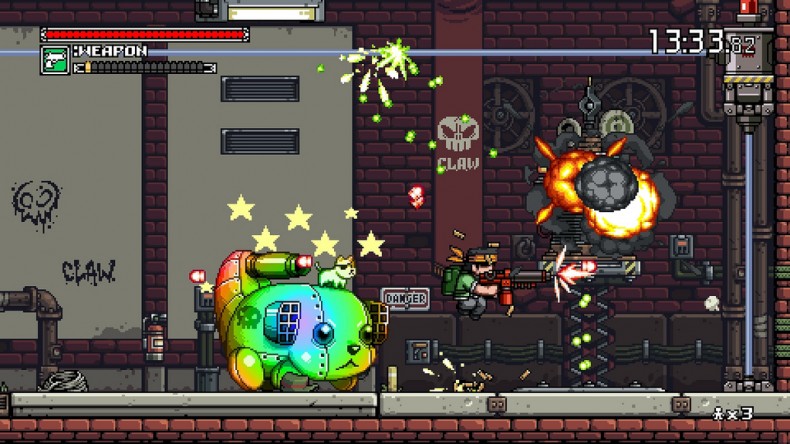 Classic looking indie gameÂ Mercenary Kings has received a release window of this coming Winter. Not only that, but they also revealed a few more gameplay details. We haven’t heard too much about the game since its announcement at E3 this past summer but that changes today. Mercenary Kings is a game that is extremely reminiscent ofÂ ContraÂ andÂ Metal Slug, but don’t let that fool you. The game features a deep weapon and item crafting system. 4 player co-op means that players can enjoy pumping lead into the enemies with friends. As players progress through Mandragora Island, they acquire materials that allow for massive crafting possibilities. There are more than 300 gun parts to piece together

The customization possibilities are endless. Two weapon customization options that they present us with are enhancing the weapon’s magazine capacity and forging a blade infused with an ice elemental ability. They also reveal that players can make the character invulnerable to enemies’ toxic weapons or utilizing an ingredient found during gameplay to boost mission skills.

Tapping R1 starts a quick reload and tapping L1 grants the player access to Shock Bombs, C4, or Riot Shields. With over 100 missions and countless customization/crafting options, players will have quite a lot to do whenÂ Mercenary Kings releases on PS4 this winter.

Former Editor-in-Chief Angie has a passion for gaming. She has never been able to put the controller down since first picking up an SNES controller at the age of 3. She loves researching anything gaming related and talking games amongst her friends.
You might also like
Indie GamesMercenary Kingsrelease window