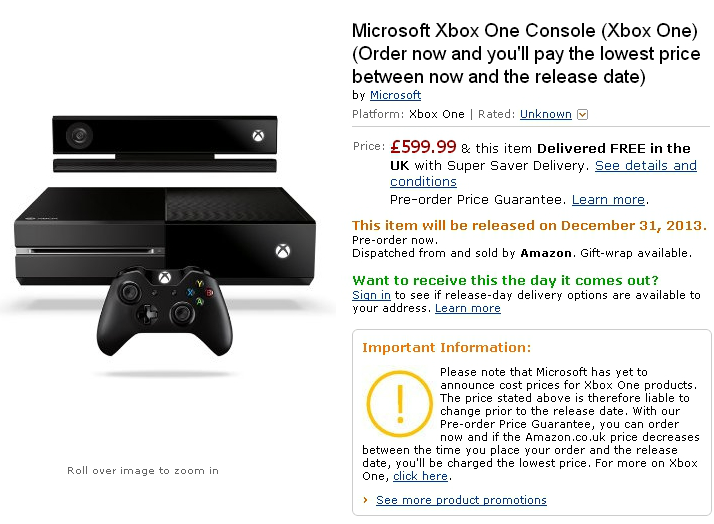 Weâ€™re still unsure how much both the Xbox One and the PlayStation 4 will cost, but retailers have begun listing prices on both, which may give us an indication of the price range. With E3 closing in, this may suggest that Sony and Microsoft will unveil their price plans then. For now, there has been no confirmation or leaks about any of the pricing details involving either console, although rumoured prices are popping up. 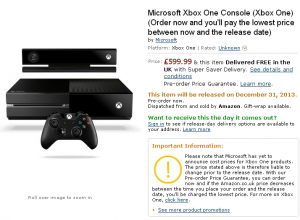 On Amazonâ€™s UK website, the Xbox One was listed for Â£599.99 (around $910) whileÂ the PlayStation 4 was seen for â‚¬599.99 (roughly $780). If these price listings are true, the PlayStation 4 will be considerably cheaper and appeal to more consumers. However, Zavvi.com listed both consoles at Â£399.99 (about $605) showing that itâ€™s still all speculation about which console will be more expensive. With a $300 difference (roughly) from both sites, weâ€™re still left in the dark about pricing.

These prices are merely to allow retailers to accept pre-orders for the consoles. Amazon noted thatÂ â€œthere are no official prices announced for Xbox One products. The price stated above is a placeholder. With our Pre-order Price Guarantee, you can order now and if theÂ Amazon.co.ukÂ price decreases between the time you place your order and the release date, you’ll be charged the lowest priceâ€.

Previous rumours suggested there would be two price plans for the Xbox One, a subsidized $299 model (which would have a monthly fee of $15) while the full console would cost $499. Although neither of these have been clarified by Microsoft (no surprise there), itâ€™s something to keep in mind when coming to these retail listings before the official price values have been released.

Next-gen games have also been listed on Amazon US and Amazon.de. On the US site, games were listed for $99.99, while on Amazon.de they were listed at â‚¬99.99. Once again, these prices are just to accept pre-orders; nothing is clear in terms of pricing. Come E3, it’s likely weâ€™ll be given pricing details by Microsoft and Sony.

Former Staff Writer Mark is an Irish student passionate about games. He enjoys playing sports such as soccer and rugby, but loves playing video games at any time possible. Mark plays mostly on the Xbox 360, but also plays on the PC from time to time. He is a multiplayer manic and also loves to delve into deep storylines within RPGs.
You might also like
amazonPlayStation 4xbox one