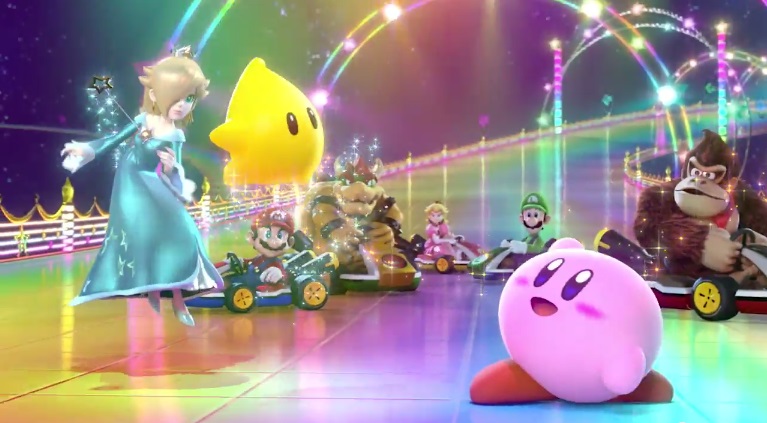 Nintendo let loose a new Nintendo Direct today, highlighting titles that are on the way to Wii U and 3DS between now and next spring.

Per usual, Nintendo loves to handle their own announcements in their own forum, and they let a new reveal out right at the starting line.

Hyrule Warriors, a tentatively titled collaboration with Tecmo Koei, plays as a Dynasty or Samurai Warriors game in the Zelda universe. Linkâ€™s got a new design, comrades, and tons of classic enemy hordes to take down in this new action game that drops in 2014. Iwata was sure to emphasize that this is not the new Wii U Zelda, but a side game in the series.

Next on show was Kirby Triple Deluxe. As the name not-so-lightly suggests, this is Kirbyâ€™s new 3DS game revealed in an earlier Nintendo Direct. Kirbyâ€™s got new copy powers and the ability to move between background and foreground, along with a more powerful vacuum ability that lets Kirby pull in large pieces of the environment that he typically wouldnâ€™t be able to eat. The game packs a 4-player battle mode that looks like Smash Bros. with Copy abilities, and a Dedede-themed rhythm game. The adventure launches in 2014.

Yoshiâ€™s New Island has been hiding in its egg for quite a while, but itâ€™s starting to break from its shell. Takashi Tezuka, who directed the art in the widely praised original for the Super Nintendo, is helping to incubate the 3DS sequel as producer. Yoshi can eat large enemies to create gigantic eggs that destroy the environment for puzzle solving and combat. The game is set to hatch in spring of 2014.

Chibi-Robo! Photo Finder is a recharge of the GameCubeâ€™s robotic chore-doing simulator. In the new game, â€˜Robo is tasked with using photos to gather â€œNostalJunkâ€ to add to a new museum in game. In order to complete these objectives, players will need to take real photos in their homes using the 3DS camera that matches the goals set in game. The adventure will hit on January 9th exclusively in the eShop, with a demo version, and challenges for the full version.

PokÃ©mon Bank launches on December 27th, letting players transfer PokÃ©mon from Black/White 1 and 2 into X/Y, and store 3000 PokÃ©mon in the cloud. The service is subscription based, but a 30 day free trial will be available until January 31st, and those that use the service before September will get Celebi, Generation IIâ€™s super legendary.

Bravely Defaultâ€™s new Sleep Point system was detailed, which allows players to gather assists while the game is in sleep mode, one for every 8 hours. Sleep points can be purchased on the eShop, but it wonâ€™t be necessary to do so to complete the game. Weâ€™ll see how micro transactions fare on Nintendoâ€™s handheld. The new JRPG strikes on February 7th. Before that though, a new free demo will release, but itâ€™ll be in the form of a side story thatâ€™ll bolster your game in the full version. The demo releases on the eShop on January 2nd.

Donkey Kong Country Tropical Freeze got some of its story detailed, as well as lots of new stages. The Kong POW move was detailed as a new screen clearing partner move. And Cranky Kong. We love you too, Nintendo. The game thaws out on February 21st.

Sonic Lost World is getting new DLC on Wii U, based on Nintendo worlds. The first piece is free, and is based on Yoshiâ€™s Story and Island. Sonic will run through the 2-D world, fighting Shy Guys and jumping across areas reserved for Yoshiâ€™s abilities. The DLC is available right now on the eShop. A hint at the next DLC is offered in a piece of artwork. Let me ruin the surprise; itâ€™s Zelda. Check out the Triforce below Sonic.

Wii Sports Club is getting golf added to it, and recreates the experience Nintendo teased at the Wii U reveal a couple of years ago. Players can use the gamepad set on the floor to fine tune their shots with a view of the ball, check terrain, and more. Nintendo is offering a 24-hour trial with the new sport, and if you used the first trial, youâ€™ve got access to another one. Golf is available right now.

Available now on the Wii U eShop, Nintendoâ€™s released NES Remix, a challenge game that mashes up many early NES games. The game mixes up levels, makes things harder, and challenges players to beat the best parts of fan favorite games. Miiverse will be used to post scores and manage leaderboards, as well as offer a set of stamps to use in posts. The game is $14.99 US.

The Year of Luigi continues with Dr. Luigi, a version of the pill dropping puzzler Dr. Mario that drops capsules down in the shape of Lâ€™s. The game includes both sorts of the game, multiplayer, and a touch screen controlled mode. The game releases on December 31st. Thereâ€™s also a new Luigi themed statue on Club Nintendo.

Super Smash Bros. for Wii U and 3DS got a new trailer, showing off a new character; recent fan favorite Rosalina. Coming from Super Mario Galaxy, sheâ€™s a defensive character that uses Luma to attack from a distance. Her play style is completely unique, and weâ€™ll learn more about the characterâ€™s traits in the future.

Finally, Mario Kart 8 revealed some new courses, vehicles, and characters, like a detailed Thwomp Fortress, Gusty Gardens, Baby racers, and ATVâ€™s. The gameâ€™s gameplay looks like a super enhanced version of Mario Kart 7 on the 3DS, and Itâ€™s set to run at 60fps, 1080p HD, online. The game pulls onto Wii U in Spring of 2014.

Overall, there were a lot of quality details presented in the presentation, and this all was only up to next season. Hopefully Nintendo can keep the pace into the rest of 2014.

Contributor Geron's been into games for as long as he can remember. From fighting Octoroks to studying graphic and game design at GMU, the guy's been around the block when it comes to interactive entertainment. When he's away from a console, he's working on his next piece of art. Fun Fact: his first published artwork was in issue #144 of Nintendo Power Magazine, when he was only 10.
You might also like
Bravely DefaultDirectgameplay