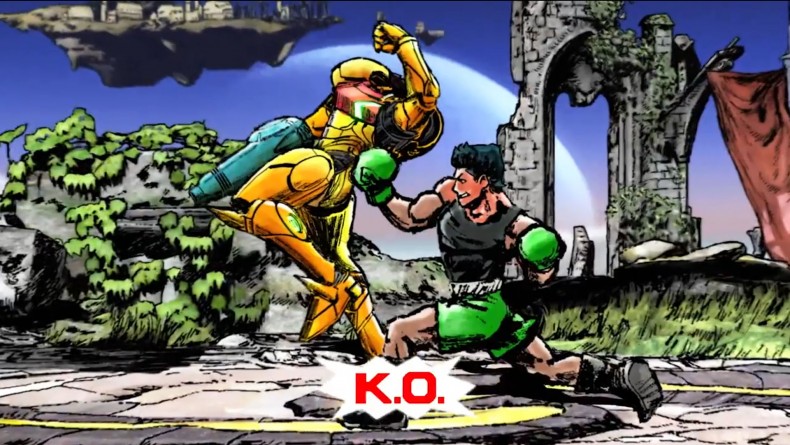 Nintendo delivered the first Nintendo Direct of 2014 with new info on games weâ€™ve seen before, as well as a few that we havenâ€™t gotten a taste of.

And a new Smash Bros. character. This one packs a MASSIVE punch.

Starting off, we get a familiar boxer training up for his next battle in the ring. Little Mac, of the Punch Out!! series, is set to defend his title as Nintendoâ€™s best fighter on the Smash Bros. battlefield.

HOLY HELL, does he look good.

Heâ€™s one of the fastest characters weâ€™ve seen so far, letting off fast jabs, dashes and weaves, and powerful hooks to opponents. Heâ€™s got tons of ways to get in, with counters, super armor, and moves that blow past projectiles. He brings another new mechanic to Smash Bros. with his Power Meter, than can be built up to unleash a supremely powerful uppercut. Unfortunately for him, though, Little Macâ€™s vertical recovery is garbageâ€¦probably picked up some badÂ habits from Doc Louis. Super Smash Bros. launches in 2014 on 3DS and Wii U.

Mario Golf: World Tour brings the arcade golf action to the 3DS with a new mode called Castle Club. Miiâ€™s can be outfitted with different accessories to change their look and abilities. Castle Club includes training activities to prepare players for live competition, so no one has to embarrass themselves too badly on the links. The title finally makes its approach on May 2nd.

Kirby: Triple Deluxe is looking like one of the deepest games in the series. From the same developer that brought us Smash Bros. in the past, the game has special moves attached to each copy power, handled by inputting a direction and B. These moves can be linked to add some strategy to movement and combat, harkening back to the Kirby Super Star days. Players will also be able to pass keychains through Street Pass, that feature sprites from Kirbyâ€™s past. The game features many other collectibles that give players bonuses upon finding them all. Your 3DS can absorb Triple Deluxe on May 2nd.

Yoshiâ€™s New Island looks like the original Yoshiâ€™s Island on its shell, but it includes a large amount of new mechanics and items. Eggs can now be Mega Eggdozers, and destroy everything in their path, or metal, and be used to hit things hard or weigh something down. Yoshi can also transform again, with many new forms like a jack hammer or sub that are all controlled through tilt. Grabbing a Power Star lets Yoshi run faster than ever, plowing through enemies and obstacles. Thereâ€™s also a Wing that lets Yoshi fly past levels, in case players have too much trouble in the game (donâ€™t suck. Its unbecoming of you.) The game can be licked up on March 15th.

Steel Diver: Subwars is an FPS sequel to the 3DS launch title. Its slower and more methodical than most shooters, and includes online 4 v 4 multiplayer combat. Thereâ€™s a free version available on 3DS eShop right now that offers 2 subs, 2 levels of single player, and full access to multiplayer features. Players who enjoy the game can purchase the full version on the eShop today. Oh, and uh, Peppy, of the Star Fox team, is in it. Cool.

Rustyâ€™s Real Deal Baseball is an insane take on baseball minigames, and getting deals on them. The game is designed around the feel of different parts of baseball through strong audio and visual feedback. The games run from typical batting cages and catching, to actually carving baseball bats and making calls as an umpire. All of the games are sold separately, butâ€¦thatâ€™s where the real deal comes in. You can buy each minigame for $4.00, but you can also haggle the real price of the games, and significantly discount them, meaning that better negotiators can get far superior prices than someone who plays passively. The strange title hits the eShop field in April.

Pokemon Battle Trozei is a line matching sequel to the original DS game that features every known Pokemon. Collecting the monsters lets your puzzle solving do damage to other players and opponents, and you can partner up with other players to rip up more challenging enemies. The game launches on the eShop on March 20th.

Professor Layton and the Azran Legacy features the sharp puzzle solving of the series in the newest game on the 3DS. Street Pass allows players to create their own scavenger hunts in game, and share them with others, as well as pass unique items that are only available through others. The game hit 3DS on February 28th.

As we all know now, Monster Hunter 4 Ultimate comes to the US in early 2015. The game has many more movement options, and full online play on the 3DS. Itâ€™s also quite the looker.

Weapon Shop de Omasse comes from Level 5. The title is a comedic rhythm game where players take the role of an RPG shop keeper, forging and selling weapons and items. The title plays like a musical Cooking Mama with faster gameplay and a focus on death-dealing tools as opposed to classic meals. The game cuts into the eShop on February 20th.

Inazuma Eleven, the soccer themed strategy RPG thatâ€™s been super popular outside of the US finally comes to the states today on the eShop.

Thereâ€™s also quite a few Indie titles coming to the 3DS soon, including Treasurenauts and Moon Chronicles, the first 3DS FPS, from Renegade Kid. Weâ€™ve also got Shovel Knight and 1001 Spikes, platformers from Yacht Club Games and Nicalis, respectively, as well as a 3DS version of Retro City Rampage, the top-down mayhem simulator from VBlank. Many more eShop titles are in the pipeline for Wii U and 3DS.

On Wii U, Ubisoftâ€™s Child of Light is on the way, a 2D platformer melded with a Turn Based RPG. The game drops onto eShop on April 30th.

Donkey Kong Country: Tropical Freeze is coming out on February 21st, and to honor that, a new trailer featuring some great new music and a look at the challenging gameplay was released. The title has already received praise, and itâ€™ll be interesting to see how it turns out next week.

NES Remix is getting a sequel, featuring more classic NES games and challenges. Thereâ€™s less black box games, and many more popular games like Mario Bros 3. The title will also include Super Luigi Bros, a remade version of the classic with the reversed levels and physics of the challenges from the first NES Remix. NES Remix 2Â is set to release on April 25th.

GBA games are finally coming to the Wii U Virtual Console, with titles like Metroid Fusion, Mario and Luigi Super Star Saga, and more in April. Itâ€™s been almost a year since the system was announced, so Iâ€™m sure many are ready for this.

A new Mario Kart 8 Trailer races in with a view of some new tracks. Some characters were also revealed; every single one of the Koopalings, Bowserâ€™s kids, are in the game. The game hits the track on May 30th.

An exciting new video of Gameplay from Monolith Softâ€™s X revealed what might by 4 player combat based on Xenoblade Chronicles for the Wii. Mechs, large monsters, and a lot of numbers make X seem like a very in-depth Action-RPG. No other details were offered on the game, but more info is coming in the future.

Finally, Bayonetta 2 shows off its combat, new story elements, and combat mechanics. And Iwata says â€œClimax,â€ so thereâ€™s that. The game looks to offer more of the same high tier combat from the original game, sharp visuals, and the insane style that Platinum Games is known for. The game is still on for a 2014 release.

A lot of content came today, especially on the 3DS end. The Wii U still needs software, but the stuff that IS coming looks fantastic. Hopefully the year paints a brighter future for the console.

Contributor Geron's been into games for as long as he can remember. From fighting Octoroks to studying graphic and game design at GMU, the guy's been around the block when it comes to interactive entertainment. When he's away from a console, he's working on his next piece of art. Fun Fact: his first published artwork was in issue #144 of Nintendo Power Magazine, when he was only 10.
You might also like
3DSeShopIndie Games