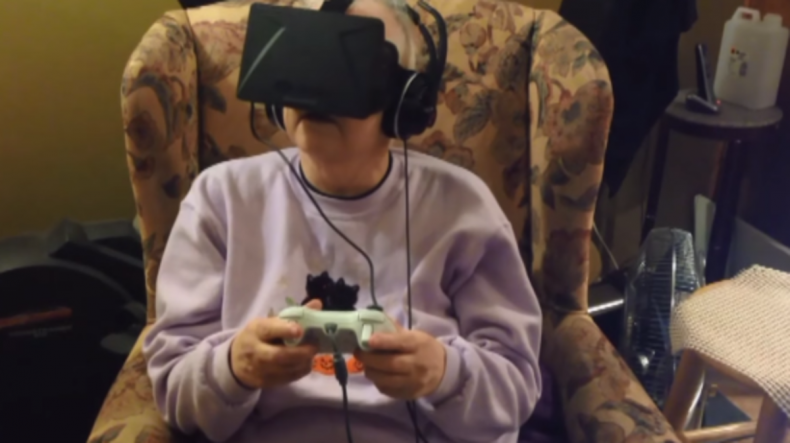 The old lady known as Roberta Firstenberg, who fought a valiant battle against cancer, has sadly passed away not too long after her daughter, Priscilla, uploaded a video onto YouTube. While all of this has happened a while back, the full, sincere story of how Priscilla was able to bring joy to her grandmother through the technology of the Oculus Rift, has only recently been told.

Back in November of last year, Roberta was losing her fight against cancer, and was given mere months to live. Priscilla, a 2D and 3D video game artist, decided to move in with her grandmother. Nightly talks between daughter and grandmother revealed an unusual dream that Roberta had, and she also expressed her longing for walking outside and tending to her garden, which has been her favorite pastime. It was then that Priscilla decided to submit the plight of letting her grandmother experience the outside world again to the Oculus Rift Support Center – and they heeded the call.

Shortly after, the Rift arrived, and Priscilla loaded up theÂ TuscanyÂ demo for the gaming device. Through it, Roberta was able to live theÂ short time she had left to the fullest, and enjoy sights she not only missed seeing, but which she also never saw before. Through the narration of her experiences in the video, her excitement is evident, and even the small things, like walking up and down the stairs of the villa in Tuscany, were enough to make her feel full of new life. Perhaps her grandest experiences came from a suggestion made on YouTube, that the Oculus Rift be used with Google Street View.

The next generation of gaming technology allowed an old lady to live the last few weeks of her life on Earth as a life anew, full of new and old memories alike. It allowed her to get up and feel rejuvenated as she could experience things as though moving there herself, while all the while relaxing in a chair. It goes to show how the video games industry has not only evolved as an entertainment business, but to bring joy to those who may have thought they lost it. We offer Priscilla our heartfelt condolences, and look forward to seeing how others can be helped through the same means. In fact, there already is another case, of a 90-year-old woman who also got to enjoy the possibilities that the Oculus Rift offers.

Senior Staff Writer Rudolf is a Journalism graduate who has an obsession with video game collectorâ€™s editions, which is matched only by his objective of moving to Canada and firmly establishing himself as a games journalist. His taste for adventure can only be satisfied by action-adventure games, sizzling steaks and dreams of gliding through the air on a snowboard.
You might also like
Oculus Rift