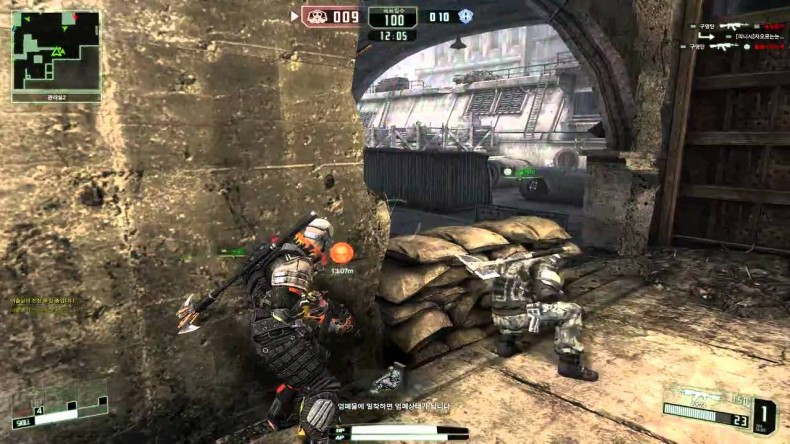 Wondering where the “hardcore” part of this so-called “hardcore shooter” comes in? Well, OGPlanet promises that their new action shooter, Dizzel, will be their most exciting and violent game yet, even featuring Fatalities. The original announcement for the game was all the way back in 2009, but will first be available as a public beta on the 9th of June. You can sign up for it here.

The game has been developed Neowiz Games and NS Studio and is a third-person shooter, with almost the same look and feel as Gears of War. It’s set in the not-too-distant future. Maybe around the time World War III was estimated to start at some point. Dizzel presents quite a large variety of weapons, whether it’s ranged or melee. In addition to that, multiple unique maps and game modes are included for every kind of shooter fan to enjoy. Let’s have a look at the main features of the game.

Fatalities: Of course, this style of execution sits right at the top. There may be thousands of ways to die, but this one is the most effective in ensuring that your enemies won’t come back, because they’ll be…well…fubar.

Take cover:Â The one-man-army thing quickly grows old. Many of us would love to be Chuck Norris, but that just isn’t possible. And so, taking cover and returning fire during crucial moments, like when the enemy is reloading or taking a cigarette break, is our best option.

Blind fire:Â For those moments when one just can’t pop out of cover to get an accurate shot in, sticking an arm around the corner and firing everywhere in what is almost akin to the typical spray and pray approach that guys do with automatic weapons.

Killer Sentinels:Â War machines of immense destructive capabilities, this game mode is unique in that teams take turn to pilot these machines, and the only option for the opposing team is pretty much to flee.

Predator Mode:Â Feel like the iconic Predator from the Xenomorph universe. Between each round, a player is randomly selected to become the “BOSS” and enjoy a dramatic increase in speed and other stats.

2 vs 2 vs 2 vs 2:Â Kind of reminiscent in spirit to Medal of Honor: Warfighter‘s “Fireteam,” mode, this one emphasizes teamwork between different parties of two players, with each having to watch each other’s backs.

And other than that, popular modes like Team Deathmatch and Demolition are included as well.

Check out some early beta footage of the game below:

Senior Staff Writer Rudolf is a Journalism graduate who has an obsession with video game collectorâ€™s editions, which is matched only by his objective of moving to Canada and firmly establishing himself as a games journalist. His taste for adventure can only be satisfied by action-adventure games, sizzling steaks and dreams of gliding through the air on a snowboard.
You might also like
Gears of War