[RUMOR] ‘Call of Duty: Modern Warfare Collection’ Coming to PS4 and Xbox One 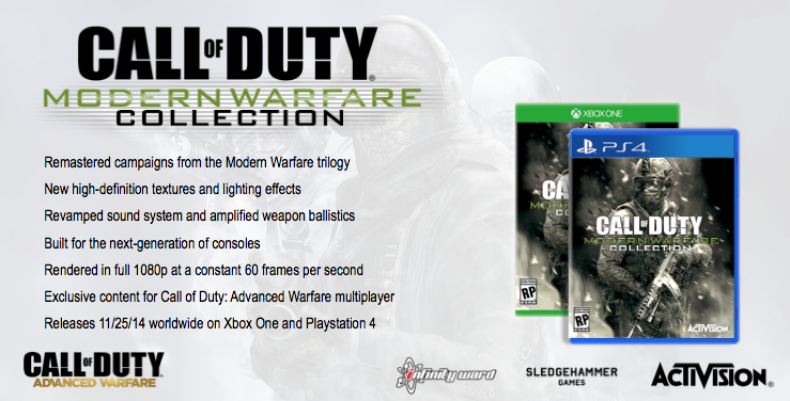 If this image posted on Reddit is to be believed then it appears that a Call of Duty: Modern Warfare Collection is heading to PS4 and Xbox One running at 1080p and 60 frames a second.

The collection will include the full campaigns of the Modern Warfare trilogy, boasting remastered lighting and high-definition textures. Although the advert does state it will feature exclusive content for Call of Duty: Advanced Warfare multiplayer, it’s highly unlikely the collection will include every single multiplayer map from the three games.

Nothing official has been announced by Activison at the time of writing, so please take this with a grain of salt. As of now, the rumor could go either way, but if it’s true – be ready to get your dirty mitts on this collection come November 25th.
News, PS4, Slider, Xbox One
Call of Duty: Modern Warfare Collectionps4xbox one

Senior Staff Writer Karl has been an avid gamer since the days of the original PlayStation, it's a passion that took ahold of him at a young age and one that never let go. When he isn't playing games he's usually writing about them, or listening to The Killers. Metal Gear Solid is quite possibly his favourite gaming series of all time, having only initially purchased a PlayStation 3 to be able to experience Metal Gear Solid 4.
You might also like
ps4xbox one