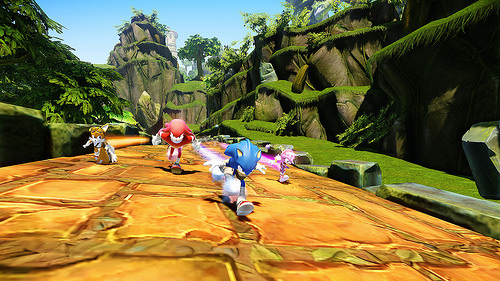 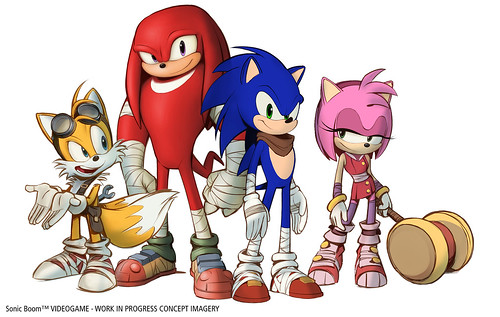 Today, Sega has revealed a new branch in the Sonic the Hedgehog universe called Sonic Boom.

The new initiative will launch a CG animated TV series, a toy line, and two new games for the Wii U and 3DS.

With Sonic Boom comes redesigns of the series titular character along with his companions Miles “Tails” Prower, Knuckles the Echidna and Amy Rose.

The television series will debut on Cartoon Network during the 2014/2015. The series is an ensemble comedy of 52 x 11 minute episodes. Each episode “starts a small character-driven story and explodes into an epic tale of saving the world, robot battles and more.” 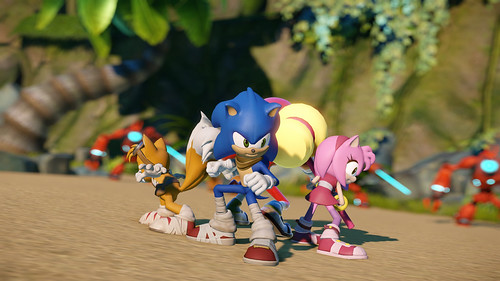 Sonic Boom the video game will act as a prequel to the television series that will differ from greatly from past games in the Sonic franchise.

The Wii U version of the game will be developed by Big Red Button Entertainment and the 3DS version will be handled by Sanzaru Games, known recently for their work on Sly Cooper: Thieves in Time.

Sonic Boom is said to “take advantage of the innovative hardware of both the Wii U and Nintendo 3DS with traditional elements of Sonic games, such as speed, also featured. The videogame will also introduce exploration, combat and a new Enerbeam tether mechanic that will allow the Sonic boom world to be discovered in totally unique ways.”

Alongside the games and television show will come a line of toys by manufacturer TOMY, including plush, action figures, RC, role play, vehicles and novelty.”

Sega also expects to launch a broad licensing program across categories such as “toys, apparel, publishing, accessories, food and beverage, health and more.”

â€œWe want to ensure that the Sonic brand continues to evolve and appeal to new generations of Sonic fans and this different look introduces a fresh approach that will be at once both familiar and new to consumers. We are committed to supporting this initiative to provide great entertainment to fans for all aspects of their lives.â€ – John Cheng, President & COO, SEGA of America

Check out the reveal trailer of the game here:

The Sonic Boom games, television series, and toy line are all slated for launch later this year.

Senior Staff Writer Kenneth Shepard is a freelance video game journalist, the first human Spectre and an avid Coca-Cola enthusiast. When he's not sharing his opinion on the internet or saving the galaxy from certain death he enjoys sobbing hysterically over the lives of fictional characters . A student at the University of North Georgia, Kenneth currently writes about games for the University's newspaper.
You might also like
3DSSEGAsonic boom