Skullgirls Encore Gets New “Typing of the Skullgirls” Mode 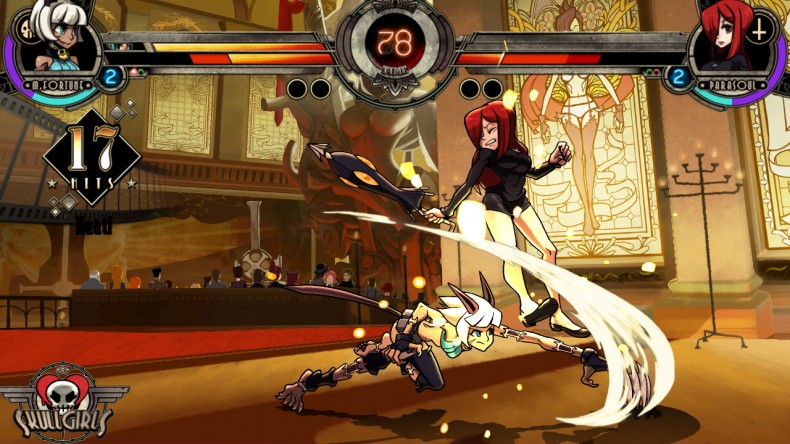 Skullgirls, the hand-drawn 2D fighter from Autumn Games, will be receiving a new mode entitled “Typing of the Skullgirls”. This mode is focused on special attacks; normal attacks will do little damage. The super meter builds automatically for each player, making matches chaotic with constant supers being unleashed. Upon using a super, the player will be faced with a word phrase. If the player is able to type the phrase correctly in the allotted time, the super will do 150% damage. Minor mistakes are still allowable, though, as a phrase entered with just a few typos will still allow the fighter a regularly-powered attack. However, if the player is not able to finish the phrase in time, their super attack will be reduced to just 10% of the original damage.

The defending player will also have the ability to defend against an opposing super by correctly typing a phrase of their own. The defensive typing will weaken the opposing attack based on how well the player can type their given phrase.

The mode can be played against AI, in Arcade or Story mode, or in local multiplayer. Unfortunately, there will be no online support. “Typing of the Skullgirls” mode will be coming to both the PC and console versions of the game when the large “Encore” update is released.

I think this all sounds fantastic. My friends and I adore Skullgirls, so this mode is sure to add a hilarious amount of fun to an already great game. Check out a video of the new mode in action below.

(Thanks to NeoGafer Alfredo for the screenshot)

Senior Staff Writer Colton Steury is a musician, writer, and fervent gamer who enjoys most any games, but is especially fond of RPGs, platformers, third-person shooters, and indie games. When he's not writing articles, composing songs, or gaming, you could probably find him eating potato chips and petting a cat. Generally, he is willing to accept potato chips/cats as currency.
You might also like
patchSkullgirlsUpdate