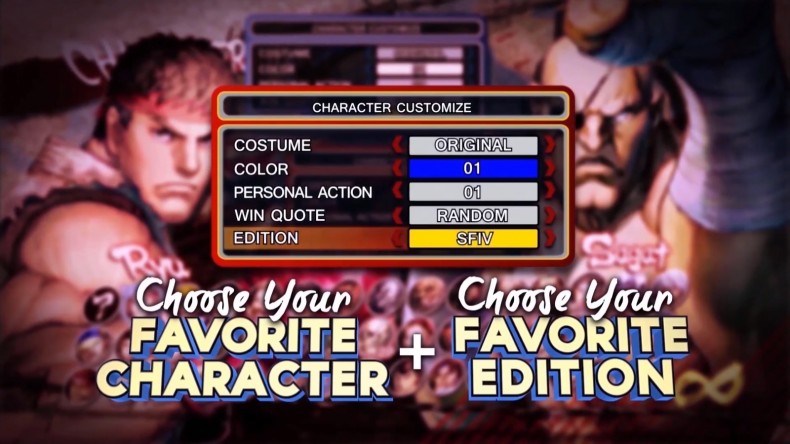 The (most likely) final update to the Street Fighter IV series, Ultra Street Fighter IV, is set to release this summer, and while we know of some new characters, stages and mechanics, fans have been in the dark about additional features being pushed into the new title.

One of the coolest new features, revealed at SoCal Regionals 2014, is the ability to select which edition of a character you want to use. In past versions of SFIV, certain characters had some super-busted techniques that swayed many matchups in their favor…while making the characters hilarious fun to play. Now, players can see how silly Sagat used to be, and how he stands up with the rebalanced versions of himself and the rest of the cast.

Balance might be tossed out when the edition selection is utilized, but it should make for some fun casual matches in the future. It’s yet to be known if tournaments will allow the feature; Street Fighter x Tekken had a character buffing mechanic in its gem system, that was quickly dropped by tournament players because of its unpredictability.

Contributor Geron's been into games for as long as he can remember. From fighting Octoroks to studying graphic and game design at GMU, the guy's been around the block when it comes to interactive entertainment. When he's away from a console, he's working on his next piece of art. Fun Fact: his first published artwork was in issue #144 of Nintendo Power Magazine, when he was only 10.
You might also like
EditionEVO