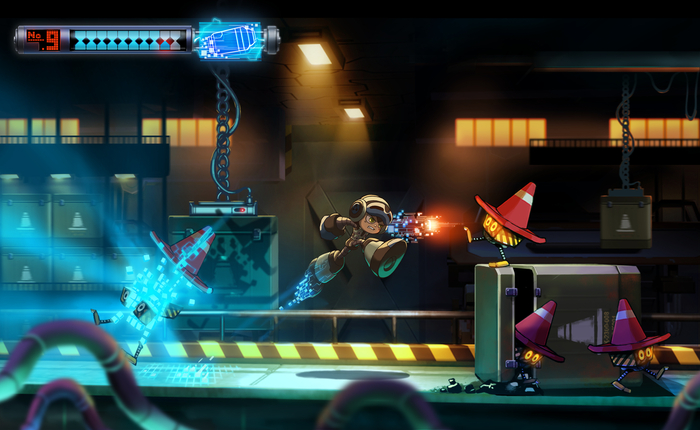 This weekend, Keiji Inafune, creator of Mega Man, revealed his new project. Titled â€œMighty No. 9â€. The game is being built as a successor to the Mega Man gameplay, down to the copying of boss character abilities. The development team includes Inafuneâ€™s company Comcept, as well as veteran Capcom members in an effort to restore the classic action genre for a new generation.

The game is being crowd-funded, as many projects are now, through KickStarter. Its campaign has been successful so far, meeting its initial goal of $900,000 and continuing to gain backers.

The title is intended for PC through Steam and â€œother DRM-free methods,â€ with a targeted launch of early 2015. Its stretch goal is to see it reach current-gen consoles, Mac, and Linux; bringing it to as many platforms as the team can afford.

As fans of 2-D action games, â€œMighty No. 9â€ has a mighty high spot on our watch list. If youâ€™re down for a return to what made classic Mega Man games great, be sure to check out the Kickstarter page and drop them a monetary E-tank if you believe in the project. The page features tons of concept art and information, and illustrates how seriously the team is taking the project.

Contributor Geron's been into games for as long as he can remember. From fighting Octoroks to studying graphic and game design at GMU, the guy's been around the block when it comes to interactive entertainment. When he's away from a console, he's working on his next piece of art. Fun Fact: his first published artwork was in issue #144 of Nintendo Power Magazine, when he was only 10.
You might also like
ComceptKeiji Inafune