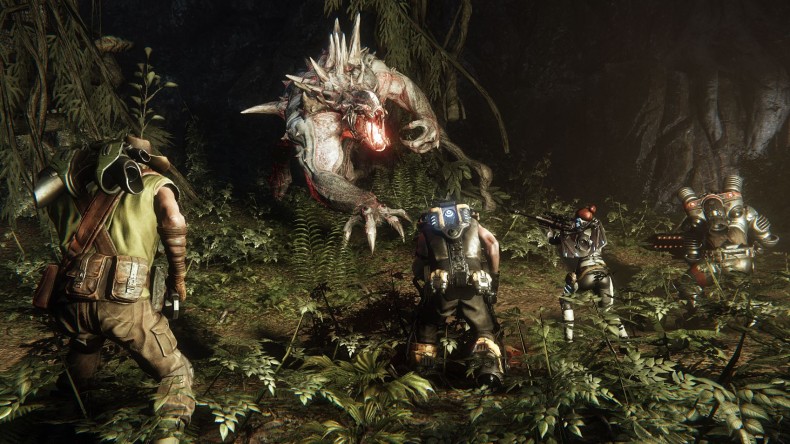 If you arenâ€™t familiar with it:

EvolveÂ is an online-centric first person shooter that pits a team of four player-controlled huntersÂ against a single, powerful player-controlled monster. Each one of the hunters has their own unique abilities and will have to work together to overcome their formidable foe. The monster is extremely dangerous and will only get stronger as the match goes on. There will also be heavy interaction with the environment in this game. For example, there are other wild creatures running around including some that are deadly in their own right. The monster, currently nicknamed â€œGoliathâ€, can actually hunt and consume other animals as a means to get stronger. The game will require a great deal of patience, skill, and strategy. The developers at Turtle Rock Studios also worked on such games asÂ CounterstrikeÂ andÂ Left 4 Dead.

For the most part, weâ€™ve just seen footage from the huntersâ€™ point of view. But this video is one of the best looks weâ€™ve had yet of what itâ€™s like to play as the monster. Itâ€™s accompanied by commentary fromÂ Aaron â€œAyeseeâ€ Chambers, the co-founder of Turtle Rock, and design director, Chris Ashton.

They help toÂ explain a ton of gameplay mechanics and introduce us to some helpful strategies.

Stay tuned for more information as it’s made available!

Zach is a Communication student at the University of Missouri who loves video games, puppies, and Chipotle burritos. You can find me either playing video games, watching basketball, or jamming to whatever new metal album I can get my hands on!
You might also like
2K GamesEvolvemultiplayer