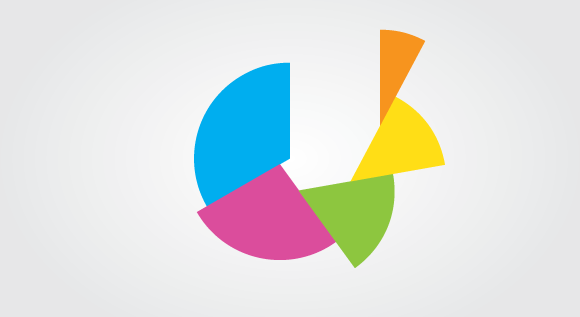 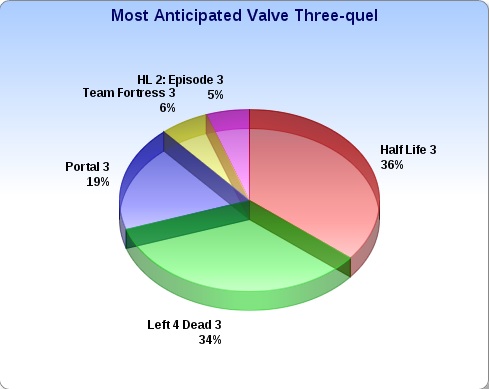 Running for about just over a month, the SpawnPoll for the most anticipated Valve “three-quel” games has yielded quite the interesting results. Half Life 3 leading the poll was a given, but the most interesting thing is that much-rumored Left 4 Dead 3 has come in as a veryÂ close second to the big H’n’L. Trailing by just 6 votes behind, Left 4 Dead 3 has us zombie-killing fans in an absolute frenzy, waiting for our next go at some special-zombies-a-comin’, samurai swords-a-swingin’, and confused zombie heads-a-flyin goodness.

What’s also surprising is the deep gap between Left 4 Dead 3 and Portal 3; I would’ve easily wagered a guess that Portal 3 would be at least a close third, if not second, to Half Life 3, but it didn’t even get close to the hundred votes mark on the poll.

Team Fortress 3’s 19 votes seem almost comically offensive, and almost neck and neck with Half Life 2: Episodes 3’s votes (the three-quel that honestly no one wants, because…well…everyone’s hearts are completely set on Half Life 3 coming out).

Again: Valve, take notice. Reap the beneficial insight that our SpawnPoll has so nicely provided to you, and make sure to bring out the below games according to the exact descending order shown in the poll (just make sure to incinerate Episode 3; no ones wants it. That 1 person in the world who does probably voted 17 times from 17 different computers to prove a point. THE NOIVE!!!). 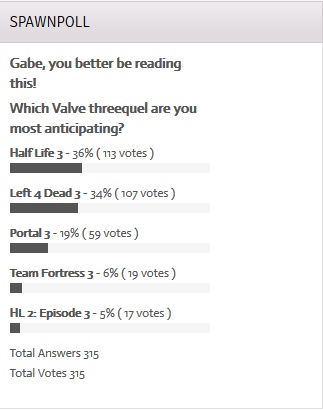 Founder/Consultant Growing up in different countries, Karam has a unique global perspective about gaming. He brings with him that set of eyes and ears that can look at the state of gaming from afar. His gaming loves cover just about every genre, and he is a constant presence on Xbox Live and PSN. Karam is a Systems Administrator by day and lives in Georgia with his wife and three children. By night he transforms into Aye Karamba (Live) or Aaqiloon (PSN), and his virtual aliases live online.
You might also like
Gabe NewellHalf-Life 3Left 4 Dead 3